Several 'buried' in avalanche at ski station in Swiss Alps; 4 rescued so far 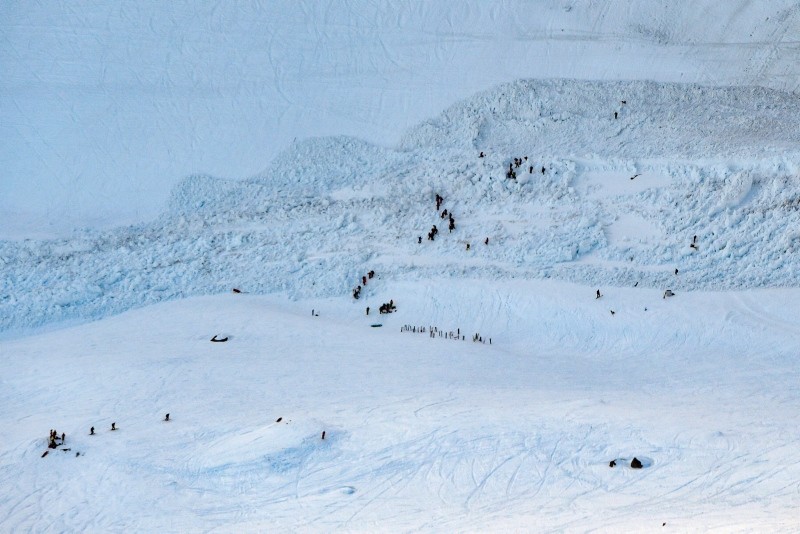 An afternoon avalanche swept up skiers as it rumbled across a slope at a popular Swiss Alps ski resort Tuesday, sparking a hurried search that rescued four people and extended into the night for others who might still be buried, authorities said.

Nearly 250 rescue workers, medical team members, police officers and military personnel backed by eight helicopters and a dozen search dogs were deployed after the avalanche on Plaine Morte, a mountain in the town of Crans-Montana, officials said.

One person was in critical condition after being extracted from the chunky snow that spilled over the Kandahar ski slope, Commander Christian Varone of the Valais regional police said. Three others were "superficially" injured, Varone said.

Roughly half of the 840-meter-long (920-yard) avalanche made a direct hit across the ski slope, he said.

"Witnesses told us other people could be buried under the layer of snow. For that reason, we are continuing our search with considerable means," Varone said.

He did not elaborate or take questions from reporters.

"What's important for the intervention teams is that we do everything we can to verify whether or not people remain buried under the avalanche. That's our main priority," he said. "The second is to take care of the families of the injured the best that we can."

Valais police spokesman Steve Leger explained later by phone that police were not providing estimates of how many people might be trapped under the snow.

The suspect received a six-month prison sentence last year that was suspended, but he failed to abide by the terms of the punishment, Tarabeux said.

An alarm sounded shortly before 2:30 p.m., minutes after the avalanche hit the slope at Crans-Montana, which is located 180 milometers (114 miles) east of Geneva, resort operator CMA said.

Switzerland's Institute for Snow and Avalanche Research had put the risk of an avalanche in the area at level 2, which is relatively low on its 5-point scale.

Michele Vizzino, who manages the La Violette restaurant near the gondola that runs up to the peak, said he heard the avalanche but didn't see it. Video from the site showed skiers on the slopes above a trail of lumpy snow after the avalanche.

The avalanche comes ahead of a weekend women's World Cup event involving top skiers such as Switzerland's Lara Gut on the Mont Lachaux run at Crans-Montana.

Event spokesman Hugo Steinegger said two companies of Swiss military forces — totaling about 180 people — who had been deployed for the races were quickly dispatched to the avalanche site to help with the rescue.

He said the avalanche was not expected to affect the start of the event, which begins with training runs on Thursday.