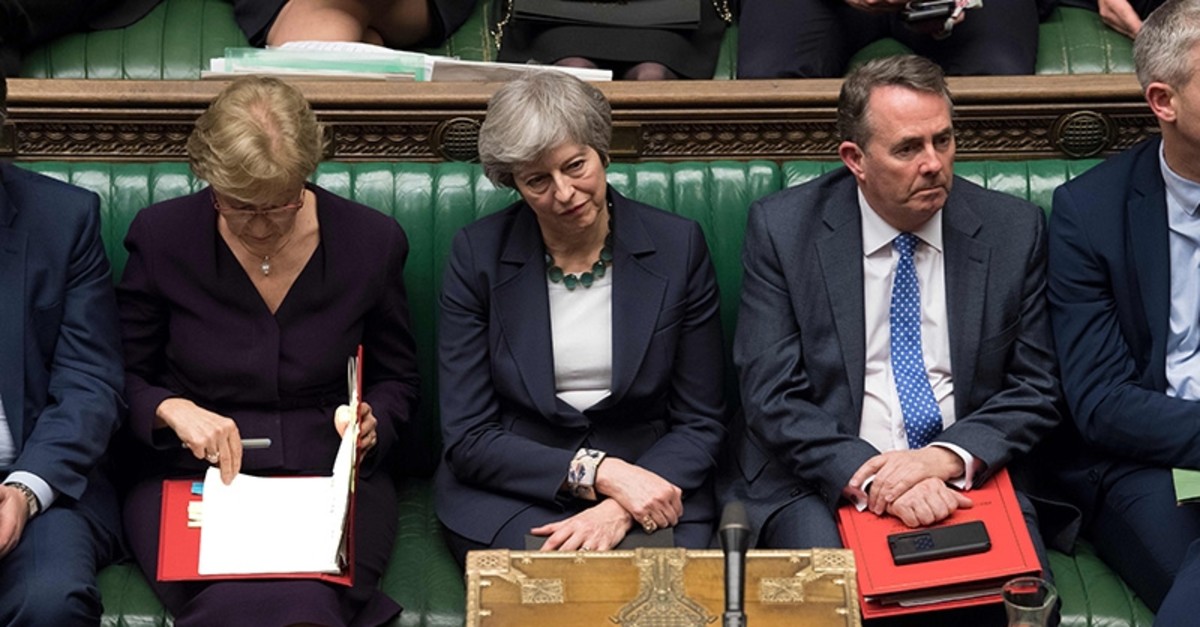 A handout photograph released by the U.K. Parliament on March 13, 2019 shows Britain's Prime Minister Theresa May reacting on the front bench in the House of Commons in London on March 13, 2019. (AFP Photo)
by Compiled from Wire Services Mar 13, 2019 10:20 pm

In a tentative first step toward ending months of political deadlock, British lawmakers voted Wednesday to block the country from leaving the European Union without a divorce agreement, triggering an attempt to delay that departure, currently due to take place on March 29.

Parliament is scheduled to decide Thursday whether to put the brakes on Brexit, a vote set up after lawmakers dealt yet another defeat to Prime Minister Theresa May amid a crisis over Britain's departure from the EU.

The lawmakers' 321-278 vote has political but not legal force, and does not entirely rule out a chaotic no-deal departure for Britain. But it might ease jitters spreading across the EU after lawmakers resoundingly rejected May's divorce deal on Tuesday. Exiting the EU without a deal could mean major disruptions for businesses and people in the U.K. and the 27 remaining EU countries.

Speaking with a raspy voice after weeks of relentless pressure, May hinted that she plans to make a third attempt to get lawmakers to support her Brexit deal, which they have already rejected twice.

She said Parliament faced a "fundamental choice" — a "short, technical extension" if lawmakers approve a divorce deal with the EU in the next week, or a much longer delay to Brexit if they don't.

The EU warned that voting against no-deal Brexit wasn't enough to stop it. By law, Britain will leave the EU on March 29, with or without a deal, unless it cancels Brexit or secures a delay.

"There are only two ways to leave the EU: with or without a deal," a European Commission official said. "The EU is prepared for both. To take no deal off the table, it is not enough to vote against no deal - you have to agree to a deal."

The official spoke on condition of anonymity because of the sensitivity of the unresolved situation.

Earlier, chief EU negotiator Michel Barnier warned that "the risk of a no-deal has never been higher."

The pound took a brief knock after MPs rejected May's divorce deal for a second time on Tuesday, but rallied on hopes that MPs would now vote for a delay.

Catherine McGuinness, policy chief for the City of London financial district, said British business was now "staring down the precipice."

Carolyn Fairbairn, director-general of Britain's biggest employers' organization, the CBI, called for parliament to "stop this circus," saying: "A new approach is needed by all parties."

Parliament likely will agree to delay Brexit, but it would need EU approval. The bloc — openly exasperated by Britain's continuing Brexit crisis — warned that the U.K. would need to present a strong reason for any extension.

"I am against every extension — whether an extension of one day, one week, even 24 hours — if it's not based on a clear opinion of the House of Commons for something," said the European Parliament's chief Brexit official, Guy Verhofstadt. "Please make up your minds in London, because this uncertainty cannot continue."

The bloc is also reluctant to consider a delay that goes beyond elections to the European Parliament in late May, because it would mean Britain would have to participate in the polls even as it prepares to leave.

Both Britain and the EU have ramped up planning for a no-deal Brexit, which would rip up decades of rules for travel and trade between Britain and the bloc. Economists say it could cause huge upheaval, with customs checks causing gridlock at U.K. ports, new tariffs triggering sudden price increases and red tape for everyone from truckers to tourists.

The U.K. government announced its plans for the Irish border in the event of a no-deal Brexit, saying it wouldn't impose new checks, duties or controls on goods coming from EU member Ireland into Northern Ireland. It also said it wouldn't slap tariffs on 87 percent of goods coming into Britain from the EU — though there would be new levies on imports of some items including meat and cars.

The tariffs, intended to be temporary, wouldn't apply to goods crossing from Ireland to Northern Ireland, raising fears the plan would spark a rise in smuggling.

Irish Prime Minister Leo Varadkar said under the proposals, "Northern Ireland will become a backdoor to the European single market and I think that in a matter of months that will lead to the need for checks at Northern Ireland's ports."

"I don't think the U.K.'s proposals will be workable for very long," he said during a visit to Washington.

"Potentially it is going to be a nightmare," said Michael Eddy, a district councilor who lives in the aptly named town of Deal, a few miles from the major Channel port of Dover on England's south coast.

He says local authorities have modeled potential disruptions and believe that even "a two-minute delay for every truck going through the port of Dover" would lead to a 50-mile (80-kilometer) traffic jam.

The European Parliament approved measures Wednesday to ameliorate the immediate hardships of a no-deal Brexit. It backed emergency plans to provide continuity for everything from air, port and road traffic to foreign students to the fishing industry.

The U.K. Parliament has twice rejected the withdrawal agreement that May spent two years negotiating with the EU, and the bloc insists there will be no more talks.

German Foreign Minister Heiko Maas warned British lawmakers that "whoever rejects the (Brexit) agreement plays with the welfare of their citizens and the economy in a reckless way."

Yet May has not given up on a third attempt to get her deal through Parliament again.

U.K. Treasury chief Philip Hammond said he was "confident that we will do a deal" in the next few weeks.

"I think that a bit of unity would be helpful now," said Katharine Beaugie, an artist in Dover. "It would be much better if we could have found some sort of decision."