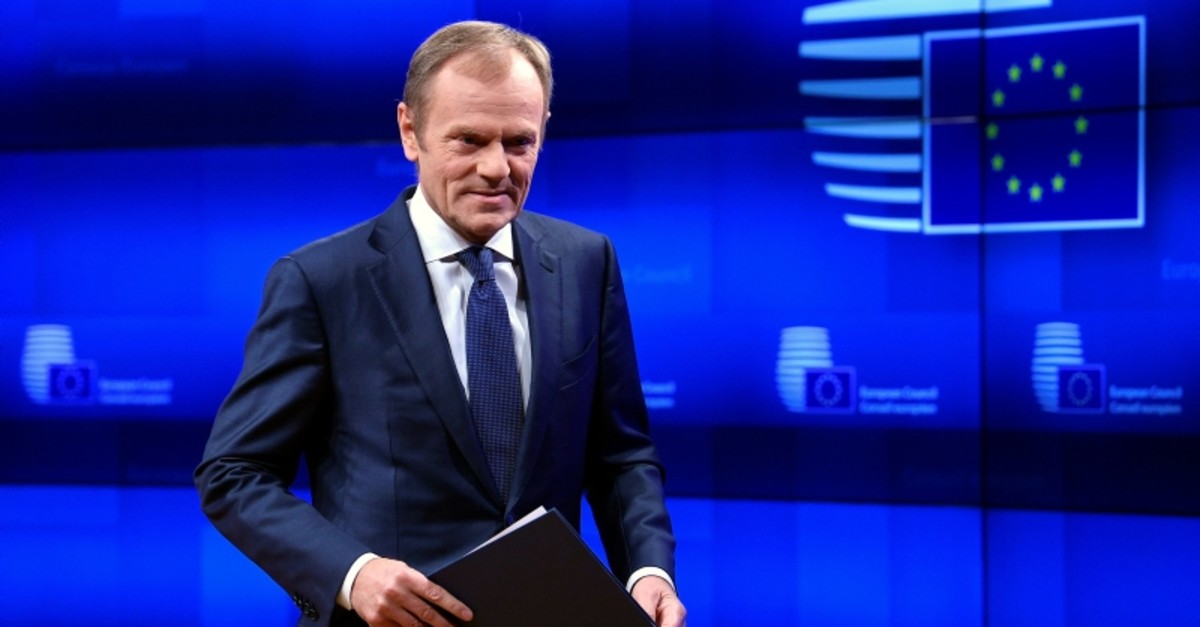 President of the European Council Donald Tusk delivers a statement on Brexit ahead of the EU summit in Brussels, Belgium March 20, 2019. (Reuters Photo)
by Mar 20, 2019 12:00 am

"In the light of the consultations I have conducted over the past days, I believe a short extension will be possible but it will be conditional on a positive vote on the withdrawal agreement in the House of Commons," he told reporters.

"Even if the hope for a final success may seem frail, even illusory, and although Brexit fatigue is increasingly visible and justified, we cannot give up seeking until the very last moment a positive solution, of course without opening up the withdrawal agreement."

Tusk took to the podium at the European Council on the eve of a summit at which Britain's Prime Minister Theresa May will plead with fellow EU leaders for more time to win domestic support for the divorce plan.

He tacitly confirmed that no decision on an extension will be possible this week at the summit, since May will have to go home to try to push the deal through the House of Commons.

But he had one olive branch.

The meeting could, he said, approve Britain's request that legal assurances on the terms of the withdrawal that were published last week in Strasbourg could be approved by the leaders, opening the way for a vote.

But he said he had not yet decided whether it will be necessary to hold another emergency summit next week to approve the extended Brexit deadline before Britain's scheduled March 29 departure.

"When it comes to the approval of the Strasbourg agreement, I believe that this is possible and in my view, does not create risks, especially if it were to help the ratification process in the UK," he said.

"At this time, I do not foresee an extraordinary European Council," he said.

"If the leaders approve my recommendations and there is a positive vote in the House of Commons next week we can finalise and formalise the decision on an extension in a written procedure.

"However if there is such a need I will not hesitate to invite the members of the European Council to Brussels for a meeting next week."

May's letter to Tusk asked for Brexit day to be delayed until June 30, despite EU warnings that it would be legally difficult to go beyond the May 23 start of European parliamentary elections.

Tusk said the date "has its merits" but admitted it "creates a series of questions of a legal and political nature. Leaders will discuss this tomorrow."