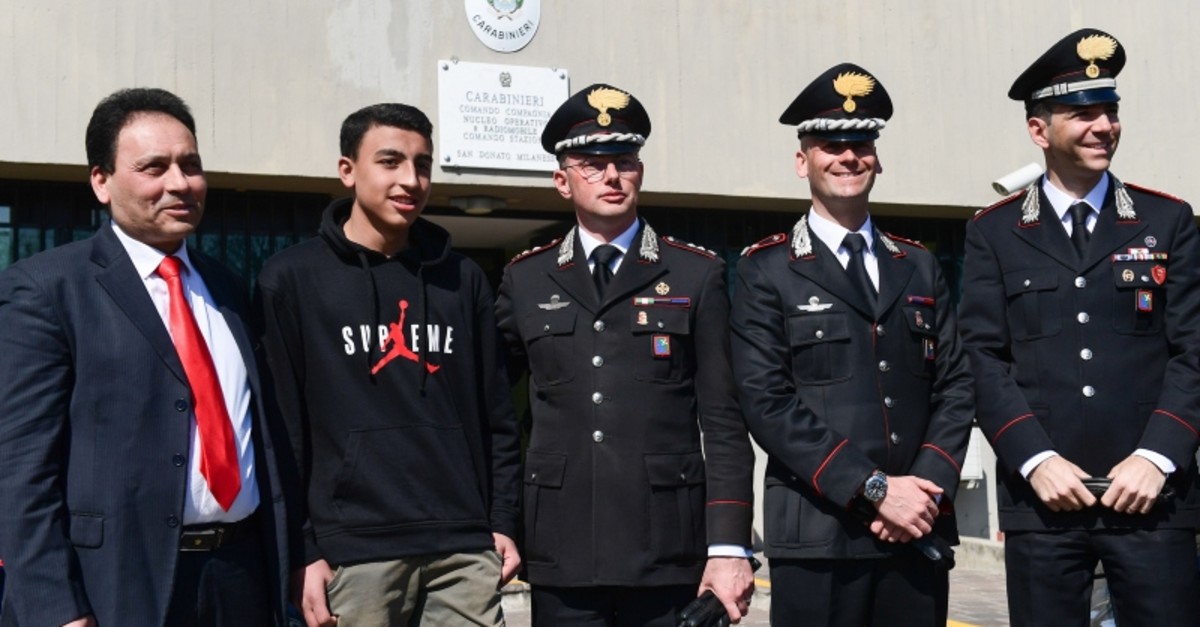 14-year-old schoolchild Ramy Shehata meets along with his father Khaled Shehata (L) with some of the Carabinieri policemen who came for help, on March 21, 2019 at the San Donato Milanese Police Station, southeast of Milan. (AFP Photo)
by Associated Press Mar 21, 2019 12:00 am
The leader of Italy's 5-Star Movement called Thursday to award speedy citizenship to a 13-year-old Egyptian boy hailed as a hero for being the first to alert police that he and scores of his middle school classmates had been abducted by their bus driver.

Ramy Shehata "put his life at risk to save that of his classmates," Luigi Di Maio said on Facebook, adding that he would ask Italy's premier to confer citizenship for special merit.

The boy's father, who immigrated in 2001, launched the appeal for Ramy, who was born in Italy. The 13-year-old is credited with helping save his classmates by calling authorities on a phone that was concealed after the driver ordered their devices collected and tied up their gym teachers.

Law enforcement officers on Wednesday stopped the bus that had traveled 40 kilometers (25 miles) from the province of Cremona to Milan, freeing the 51 middle school students and their chaperones as the driver set the bus on fire. No one was seriously injured.

The news agency ANSA reported that the Interior Ministry was speeding the citizenship request for the boy, while looking to revoke the citizenship of the bus driver, Ousseynou Sy, a 47-year-old Senegalese immigrant who became an Italian citizen in 2004.

Sy was being held on suspicion of kidnapping, intending to commit a massacre, arson, resisting law enforcement with an aggravating circumstance of terrorism because the event caused panic. Prosecutors said there were no indications that Sy was radicalized or had ties to Islamic terrorists, but that he claimed the kidnapping was to draw attention to migrant deaths in the Mediterranean Sea.

One chaperones said the driver first tied the two male gym teachers to the door, then ordered her to bind the hands of the children, keep them quiet and collect their phones. Tiziana Magarini told Sky TG24 that he brandished a knife and a gun. SKY reported that a knife was found in the charred remains of the bus but not the gun, raising the possibility that it had been a toy.

Sy's lawyer, Davide Lacchetti, told ANSA that his client never had a gun.

"Fortunately, with some looks, I made some of the children in the back understand to keep their phones," Magarini said. "And I turned mine on without being seen," putting through a call so colleagues could hear what was going on onboard the bus.

The driver made periodic stops, ordering her to spray paint the windows to obscure the view inside and to spread gasoline around the interior of the bus. She said he brandished a gas stove lighter.

Magarini said the driver appeared lucid throughout the ordeal, but that he became agitated when the bus was flanked by police on the outskirts of Milan.

"We saw the first cars arrive ahead, on the sides and behind. He started to ram into them, and he hit an officer on foot. I heard a blast of glass from the back, and in two seconds there was a formidable team that in no time pulled everyone out," Magarini said.