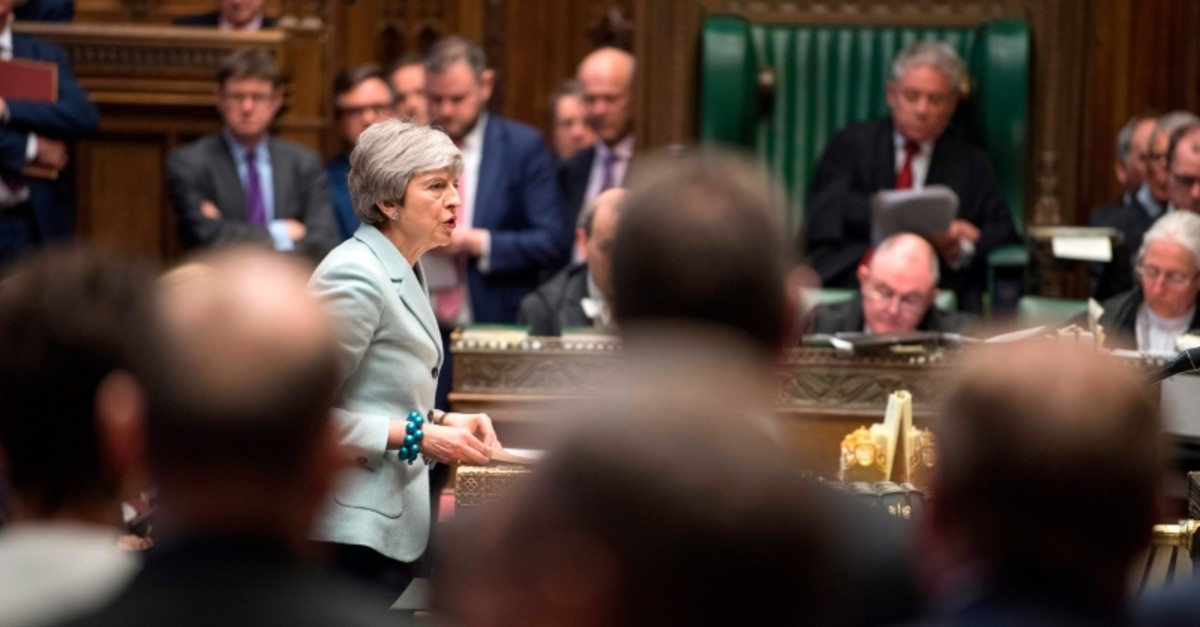 A handout photograph released by the UK Parliament shows Britain's Prime Minister Theresa May making a statement in the House of Commons in London on March 25, 2019 outlining the next steps that parliament will take in the Brexit process. (AFP Photo)
by Compiled from Wire Services Mar 26, 2019 1:35 am

British lawmakers seized a measure of control over the stalled Brexit process from Prime Minister Theresa May's foundering government Monday, setting up a series of votes that could dramatically alter the course of the U.K.'s departure from the European Union.

The move came after May conceded that Parliament would defeat her twice-rejected divorce deal with the EU again if she put it to a third vote.

"It is disappointing to see this amendment pass," said a spokesman for the Department for Exiting the European Union.

"While it is now up to Parliament to set out next steps in respect of this amendment, the government will continue to call for realism – any options considered must be deliverable in negotiations with the EU," the spokesman said.

"Parliament should take account of how long these negotiations would take, and if they'd require a longer extension which would mean holding European parliamentary elections," he said.

With Brexit delayed and the new departure date up in the air, the House of Commons voted to give itself temporary control of the parliamentary timetable starting on Wednesday so lawmakers can vote on alternatives to May's withdrawal deal. The government usually controls the scheduling of votes in Parliament.

Lawmakers who backed Monday's motion, which passed 329-302, hope the planned "indicative votes" will narrow the options down to one that can secure majority support. Possible options include a "soft Brexit" that maintains close economic ties with the EU or scrapping Britain's departure altogether.

Meanwhile, three ministers including Minister of State for the Middle East Alistair Burt quit their posts so they could back the motion.

Richard Harrington, who resigned as a junior business minister, accused the government of "playing roulette with the lives and livelihoods of the vast majority of people in this country" by failing to resolve Britain's Brexit impasse.

The government said it was disappointed by the vote, claiming it "upends the balance between our democratic institutions and sets a dangerous, unpredictable precedent for the future."

But it also conceded that the new votes might be a way to break the months-long Brexit gridlock. May said she would "engage constructively" with the results of the process, though she said she was skeptical that it would produce a decisive result.

The move raises the chances that Britain will tack toward a softer Brexit, and is likely to be welcomed by the EU. Guy Verhofstadt, the European Parliament's Brexit coordinator, tweet that it was an "opportunity to build cross-party cooperation leading to an enhanced political declaration & a closer future relationship!"

Earlier in the day, May acknowledged, "with great regret," that her deal still lacked "sufficient support" to be approved as of Monday.

She said she hoped to hold a third vote on the agreement later this week and was working to build support for the deal, which sets out the terms of withdrawing from the EU and the outline of future relations with the bloc.

May warned opponents that continuing to reject the deal could lead to a "slow Brexit" that postpones the country's departure indefinitely.

With the March 29 Brexit day set almost two years ago days away and the withdrawal agreement lacking Parliament's approval, European leaders agreed to a postponement last week to avoid a chaotic cliff-edge departure that would be disruptive for the world's biggest trading bloc and deeply damaging for Britain.

However, the EU granted a shorter delay than May sought. It said if Parliament approves the proposed divorce deal, the U.K. would leave the EU on May 22. If not, the government has until April 12 to tell the 27 remaining EU countries what it plans to do - leave without a deal, cancel Brexit or chart a path to a new option.

In agreeing to the postponement, European leaders hoped Britain's deadlocked politicians would find a solution to the crisis. But the EU isn't counting on it. The European Commission said Monday it had completed planning for a no-deal Brexit, calling that outcome "increasingly likely."

The EU said its members would be able to cope with a no-deal departure, although more remained to be done on ensuring an open border between EU member Ireland and the U.K.'s Northern Ireland — something both sides have agreed to. Checkpoints there were a source of tension and a target during the decades of sectarian violence before Northern Ireland's 1998 peace accord.

An EU official said the bloc was in "in intense discussions with the Irish authorities about these matters."

May stands little chance of getting the deal she struck with the EU approved unless she can win over Brexit-backing lawmakers in her Conservative Party and its Northern Irish ally, the Democratic Unionist Party. The DUP said Monday that the party's "position remains unchanged."

May has come under intense pressure to quit the prime minister's post as the price of winning support for the deal.

At a meeting Sunday at the prime minister's country retreat, Chequers, prominent Brexiteers told May they might back the deal — if she agreed to step down so a new leader could take charge of the next phase of negotiations, which will settle Britain's future relations with the EU.

Former Foreign Secretary Boris Johnson, who attended the meeting and is likely to be a contender in any future Conservative leadership race, accused the government of lacking "gumption" and chickening out on delivering Brexit.

Britain's best-selling newspaper, The Sun, put a call on its front page for the prime minister to resign under the headline "Time's up, Theresa."

May is hanging on, hoping she can persuade Brexit-backing lawmakers that rejecting her deal means Britain may never leave the EU.

She told lawmakers that Britain would not leave the EU without a deal unless Parliament — which has already rejected the idea — voted for it.

Opponents of Brexit feel the political tide may be turning in their favor. Hundreds of thousands of people marched through London on Saturday calling for a new referendum on whether to leave the EU or remain.

But with the deadline for a Brexit decision less than three weeks away, British politicians remain divided, and increasingly despairing about the country's political gridlock.

"Brexit is like the Death Star of politics," Conservative legislator George Freeman said. "I always feared it would be like this. It's destroying and soaking up all the prime minister's room for maneuver and political goodwill.

"I've never known this country so divided, so angry and in such a dangerous state," he said.