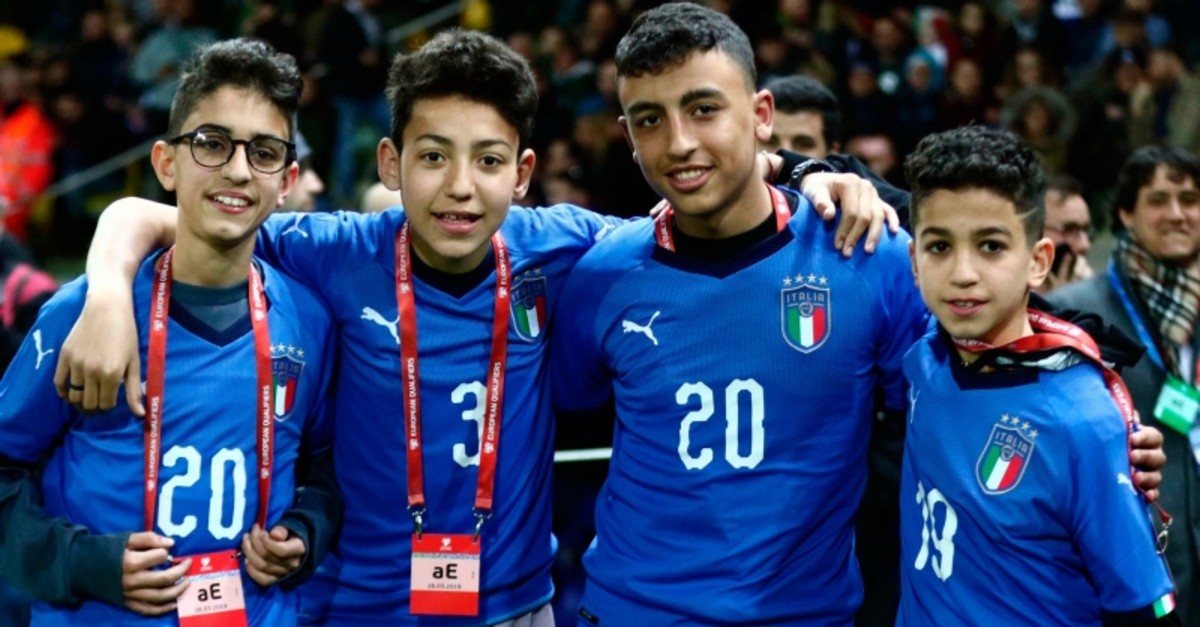 Ramy Shehata, second from right, and Adam El Hamami, left, pose with classmates prior to a Euro 2020 Group J qualifying soccer match between Italy and Liechtenstein, at the Ennio Tardini stadium in Parma, Italy, Tuesday, March 26, 2019. (AP Photo)
by Mar 27, 2019 12:00 am

Ramy Shehata and Adam el Hamami, aged 13 and 12, were among 51 pupils from a school near Milan who were on a bus that was hijacked last week by its driver, an Italian of Senegalese origin.

He wanted to blow up the bus to avenge Mediterranean migrant deaths. Shehata and el Hamami were hailed as "heroes" after hiding a mobile phone during the hijacking attempt, and using it to call police.

"Hats off" to them, Salvini said in a news conference following a meeting at his ministry with the two kids, three other survivors, and a dozen Carabinieri police officers involved in rescue efforts.

Salvini, who leads the anti-migrant League party, said Shehata and el Hamami would be given Italian passports, but not their families, who hail respectively from Egypt and Morocco.

For the two kids, the meeting with Salvini followed their Tuesday encounter with the Italian football team in Parma, where the Azzurri beat Liechtenstein 6-0.

"It was the best day of my life," Shehata said after the game, according to the ANSA news agency.

The bus hijack incident also reopened a debate on Italy's citizenship laws, with the opposition Democratic Party (PD) calling for all second-generation immigrant kids to be granted Italian passports.

The PD tried and failed to pass such a reform when it was in government. Salvini reiterated his opposition to any change in citizenship laws.