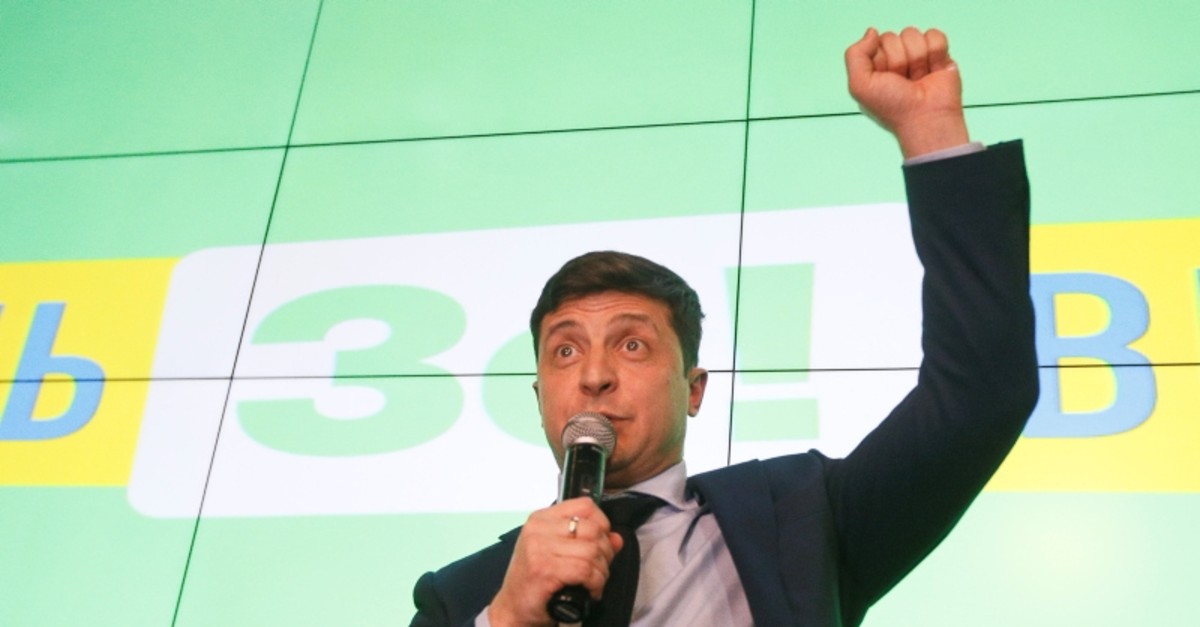 Ukrainian comic actor and presidential candidate Volodymyr Zelenskiy delivers a speech following the announcement of the first exit poll in a presidential election at his campaign headquarters in Kiev, Ukraine, March 31, 2019. (Reuters Photo)
by Compiled from Wire Services Apr 01, 2019 6:02 pm

A comedian with no political experience raced ahead in the first round of Ukraine's presidential election on Sunday, offering a fresh face to voters fed up with entrenched corruption in a country on the frontline of the West's standoff with Russia.

Zelenskiy's political experience had been limited to playing the president in a TV show when he announced his long-shot candidacy at the start of the year. But the 41-year-old capitalized on frustration over corruption and a stalling economy to leapfrog his establishment opponents.

The election commission website said Zelenskiy had 30.2 percent of the vote and Poroshenko 16.7 percent, with just over half of all votes counted. The pair will now meet in a run-off set for April 21. Ex-Prime Minister Yulia Tymoshenko, who was herself a favorite when she launched her campaign, was knocked out with 13.08 percent of the vote, figures showed.

Both Zelenskiy and Poroshenko face firmly west, and neither wants to move Ukraine back into Russia's orbit. But investors are also keen to see if the next president would push reforms required to keep the country in an International Monetary Fund bailout program that has supported Ukraine through war, sharp recession and a currency plunge.

41-year-old Zelenskiy has yet to spell out what he would do in power and one of his campaign slogans was: "No promises. No apologies." Despite concerns about his vague platform, supporters insist only a brand new face can clean up Ukraine's murky politics.

Some accuse Zelensky of acting as a front for the interests of oligarch Igor Kolomoysky, who owns the channel that broadcasts the entertainer's shows, but he denies any political links.

Poroshenko sought to portray Zelenskiy as unfit to represent Ukraine abroad, especially when taking on Russian President Vladimir Putin in international talks. Putin "dreams of a soft, pliant, tender, giggling, inexperienced, weak, ideologically amorphous and politically undecided president of Ukraine. Are we really going to give him that opportunity?" Poroshenko said.

Poroshenko has fought to integrate the country with the European Union and NATO, while strengthening the military that is fighting Kremlin-backed separatists in Ukraine's east.

Voting was a snapshot of Ukraine's recent history. Soldiers lined up to vote in makeshift polling stations in the east. Voters formed long lines outside polling stations in neighboring EU member Poland, where between one and two million Ukrainians have moved, many in search of jobs and higher wages.

Pushing the use of the Ukrainian language and instrumental in establishing a new independent Orthodox church, confectionary magnate Poroshenko, 53, has cast himself as the man to prevent Ukraine again becoming a Russian vassal state. But reforms to keep foreign aid flowing have been patchy.

Conflict in the eastern Donbass region has killed 13,000 people in five years and rumbles on despite Poroshenko's promise to end it within weeks. Frustration over low living standards and pervasive corruption has left the door open for Zelenskiy. The majority of voters in separatist-held eastern Ukraine and Crimea were unlikely to take part in the election as they needed to undergo a special registration process on Ukraine-controlled territory.

The election was shadowed by allegations of widespread vote buying. Police said they had received more than 1,600 complaints of violations on voting day alone in addition to hundreds of earlier voting fraud claims, including bribery attempts and removing ballots from polling places.

Zelensky has eschewed rallies and interviews in favor of playing gigs with his comedy troupe up to the final days of campaigning.

His political comedy "Servant of the People" returned for its third series this week.