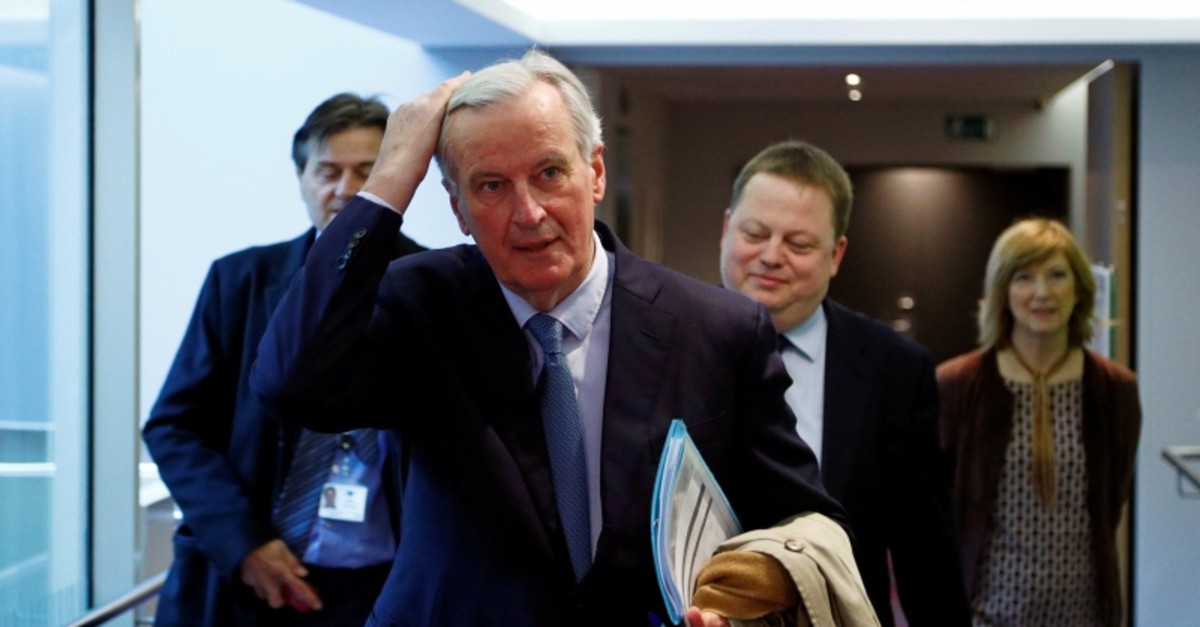 The European Union's chief negotiator Michel Barnier warned Tuesday it is "day after day more likely" that Britain will crash out of the bloc next week without an orderly withdrawal agreement.

Barnier was addressing a think tank in Brussels the day after British lawmakers again failed to unite behind any alternative to the Brexit withdrawal agreement Prime Minister Theresa May signed last year.

"Let's not forget first that we have already an agreement, we have already a deal, and it was concluded by Theresa May and the British government and the European Council and European Parliament on Nov. 25 last year, four months ago," he said.

"We tried to make sure that the U.K. could leave the EU on March 29, just as the U.K. had foreseen itself... If the U.K. still wants to leave the EU in an orderly manner, this agreement, this treaty is and will be the only one."

Barnier warned that if May cannot get this withdrawal agreement past the House of Commons, then there are only two other options available before London leaves the union on or shortly after April 12.

"If the U.K. government does not vote in favor of the withdrawal agreement in the coming days, then only two options would remain: leaving without an agreement or requesting a longer extension of the Article 50 period," he said.

"It would be the responsibility of the U.K. government to choose between these two options."

But he warned that such an extension would not automatically be granted by the other 27 EU leaders when they meet at an April 10 emergency summit.

"Such an extension would carry significant risks for the EU, therefore a strong justification would be needed. Many businesses in the EU warn us against the cost of extending uncertainty," he said.

"There would also be a political cost. If the U.K. is still a member state on May 23 it will have to organize elections," he said, referring to the upcoming European Parliamentary vote.

This would mean Britain remains in the union "longer as a member on its way out" and might "pose a risk to our decision-making autonomy," he said, warning Britain's post-Brexit ties with Brussels cannot be negotiated while it remains inside the bloc.

With just 11 days until the U.K. must come up with a new plan or crash out of the bloc in chaos, the House of Commons threw out four options designed to replace May's thrice-rejected Brexit deal — though in some cases it was close.

Monday's result left May's Conservative government facing difficult and risky choices. It can gamble on a fourth attempt to push the deal through Parliament, let Britain tumble out of the bloc without a deal, or roll the dice by seeking a snap election to shake up Parliament.

May has summoned her Cabinet for a marathon meeting Tuesday to thrash out the options. The prime minister, who is renowned for her dogged determination, could try to bring her Brexit agreement back for a fourth time later this week.

Monday's votes revealed a preference among lawmakers for a softer form of Brexit — but not a majority to make it happen.