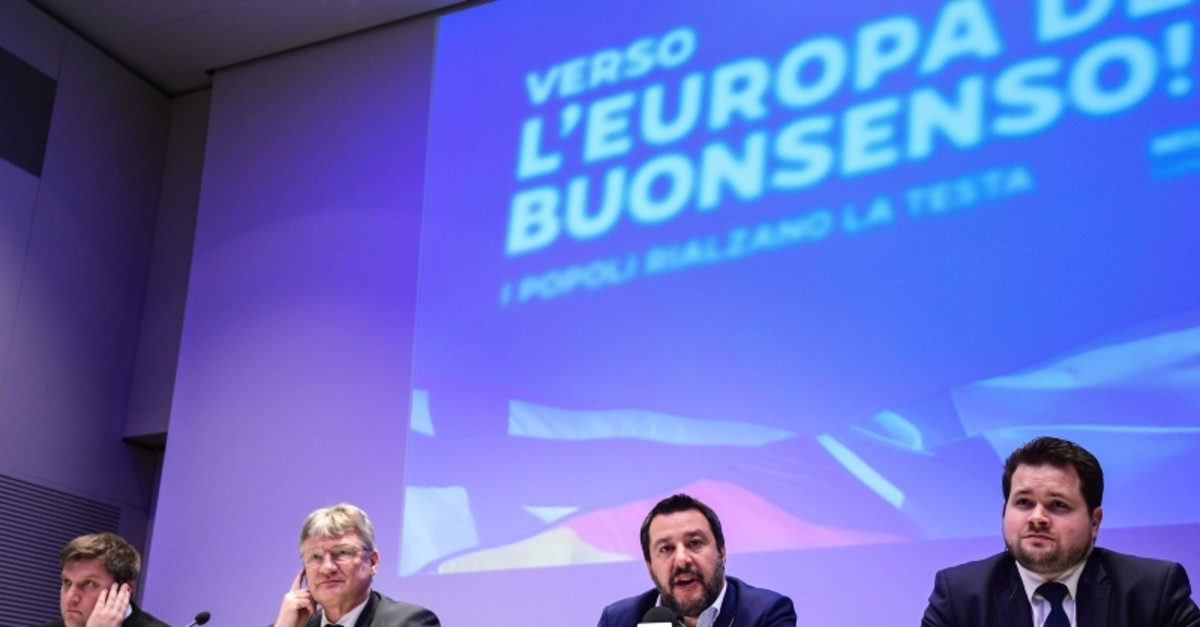 Germany's opposition far-right Alternative for Germany (AfD) and Italy's ruling League announced plans Monday to form a new group in the European Parliament along with other European eurosceptic, far-right parties.

The new group will be called European Alliance of Peoples and Nations, or EAPN, AfD leader Joerg Meuthen said in a news conference in Milan with League leader and Italian deputy premier Matteo Salvini.

"The news is that we are expanding the [eurosceptic] family, we are working for a new European dream. Today for many citizens and for many people Europe represents a nightmare and not a dream," Salvini said.

The Danish People's Party and the Finns Party of Finland - also represented at the Milan event - are for now the only other confirmed members of the new group. More affiliates are needed to make it a success.

Salvini announced a larger event, with more new allies from Europe, on May 18 in Milan. He said it would be a rally in Piazza Duomo, the square by Milan Cathedral where he closed last year's campaign for the Italian general elections.

There is an "open invitation" for all eurosceptic parties - currently split between three different EU parliament groups - to join the EAPN, but "it remains to be seen who will join the new alliance," Olli Kotro of the Finns party said.

"The objective is to be the first, the most important, the most numerous group [in the EU assembly] and the one with the freshest ideas, present in all or nearly all [EU] countries," Salvini told reporters.

The target seems very optimistic, if not unrealistic.

Lorenzo Fontana, a League-affiliated Italian government minister, told the La Stampa newspaper he expected eurosceptics to win "120 to 140" seats in the EU assembly, out of a total 705 or 751 (the number depends on whether Britain takes part in the European elections).

The National Rally of France's Marine Le Pen and Austria's ruling Freedom Party (FPOe) did not take part in the Milan conference but confirmed their cooperation with the League. The three parties already sit in the same group in the EU assembly.

Other right-wing, populist forces absent from Milan have so far declined a formal alliance with the League. These include Hungarian Prime Minister Viktor Orban's Fidesz party and Poland's Law and Justice (PiS) party.

The EU parliament currently has three right-wing, eurosceptic groups: the League and Le Pen's Europe of Nations and Freedom (ENF); the European Conservatives and Reformists (ECR), which includes PiS; and AfD's Europe of Freedom and Direct Democracy (EFDD).

Eurosceptic forces are expected to grow in strength, given rising anti-establishment sentiment in several European states, but it is unclear how much this could disrupt mainstream EU politics, long dominated by parties from the center, center-right and center-left.

"The idea is to no longer have a centralized, one-size-fits-all Europe, but to give back the power to national parliaments [...] and abandon the dangerous utopia of a united states of Europe," League foreign affairs spokesman Marco Zanni told dpa.

However, finding a common stance may be a challenge for the AfD, League and other members of the fledgling EAPN group. Speakers in Milan all spoke about the need to control immigration and fight Islamic terrorism and skirted over other differences.

Meuthen, for example, said he was in favor of letting the EU manage trade policy, while Salvini said he wanted to renationalize powers over the issue. No detailed policy manifesto for the new group was presented in Milan.