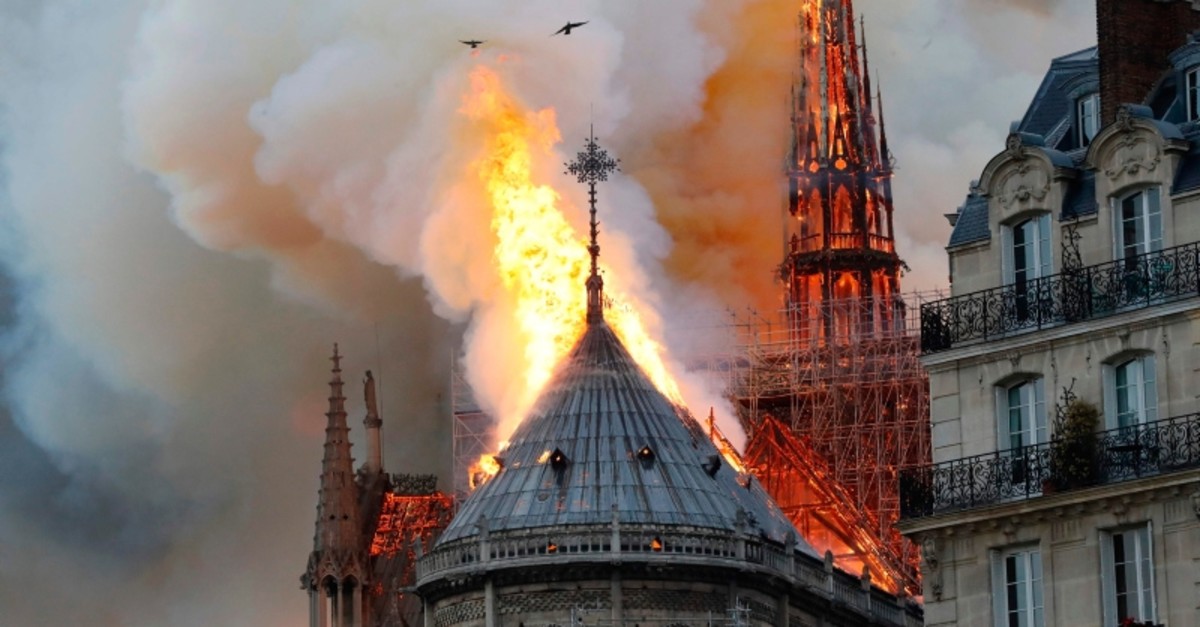 Firefighters late Monday declared the structure of Notre Dame Cathedral saved after a massive fire gutted the roof and destroyed the spire of the Western cultural icon, shocking Parisians and the world.

The huge blaze that started earlier in the evening destroyed the timber roof of the Gothic building and about two hours into the conflagration, the upper part of the 93-meter-high spire swayed and collapsed as flames shot up.

Early Tuesday, newspapers including Le Figaro and Le Parisien quoted firefighters as saying the fire, which had raged for more than eight hours, had been brought under control and was partly extinguished.

Some 400 firefighters battled the fire, aiming jets of water at the 850-year-old cathedral as solemn crowds watched quietly from behind police cordons.

On one side-street within view of the flames, dozens of faithful kneeled and sang the Hail Mary repeatedly, punctuated by readings from the Gospels.

President Emmanuel Macron praised the "extreme courage" of the firefighters and vowed: "We will rebuild Notre Dame."

The cathedral was "our history, our literature, our imagination, the place where we lived our great moments - our epidemics, wars and liberations," Macron said.

A national subscription would be announced on Tuesday to help defray the rebuilding costs, Macron added. He earlier canceled a planned address to the nation in which he was to announce policy measures in response to the Yellow Vest protest movement.

"There is an immense sadness," Paris Mayor Anne Hidalgo said.

Drone images had revealed a "terrible" situation inside the cathedral, Hidalgo said: "There is no roof any more, there's none of that left."

But fire chief Jean-Claude Gallet said that the structure of the cathedral had been "saved and preserved overall" and its bell towers, at one point thought to be at risk, were safe.

The next step would be to cool down the building, he added.

The first photographs from inside Notre Dame, published by news agency AFP, appeared to show smoking wreckage on the floor near the altar.

Flames in the roof were visible through at least two holes in the vaulted stone ceiling, but apart from that there was little obvious damage to the interior.

French media reported that the fire may have been linked to renovation work on the roof and the spire, which dated from a 19th-century restoration.

The Paris prosecutor's office said that "as matters stand" it was investigating a count of "involuntary destruction by fire."

Rector Monsignor Patrick Chauvet said the cathedral's most precious relics had been saved, including the Crown of Thorns, traditionally believed to have been placed on Jesus' head before his crucifixion.

Cathedral spokesman Andre Finot told dpa that he had been just outside the cathedral when the fire broke out: "I'm shocked, I'm disturbed, I have no words, in fact I don't know what to say."

Built in the 12th century, Notre Dame is Paris' top attraction by footfall: Some 12 million tourists visited in 2017, according to Parisian tourism authorities.

The UNESCO World Heritage Site lies in the middle of the French capital and draws tens of thousands of worshippers and tourists a day.

It was here that Christian crusaders prayed before going to fight in the Holy Land, where revolutionaries defiled representations of French kings and Napoleon crowned himself emperor in 1804.

Expressions of shock and mourning came in from around the world.

U.S. President Donald Trump called the fire "something like few people have witnessed."

He earlier offered advice to city firefighters, writing in a tweet that authorities in Paris should consider using "flying water tankers" to douse the flames.

French internal security minister Laurent Nunez later said that the use of firefighting planes "would have presented a major risk, an utter danger for the structure."

In London, mayor Sadiq Khan said his city "stands in sorrow with Paris today, and in friendship always."

"We express our solidarity to French Catholics and to the people of Paris and we offer our prayers for firefighters and those who are doing what is possible to face this dramatic situation."

The fire came less than a week before Easter amid Holy Week commemorations. As the cathedral burned, Parisians gathered to pray and sing hymns outside the church of Saint Julien Les Pauvres across the river from Notre Dame while the flames lit the sky behind them.

Built in the 12th and 13th centuries, Notre Dame is the most famous of the Gothic cathedrals of the Middle Ages as well as one of the most beloved structures in the world. Situated on the Ile de la Cite, an island in the Seine river, its architecture is famous for, among other things, its many gargoyles and its iconic flying buttresses.

Among the most celebrated artworks inside are its three stained-glass rose windows, placed high up on the west, north and south faces of the cathedral.