Counting the losses: What we know about treasures of damaged Notre-Dame 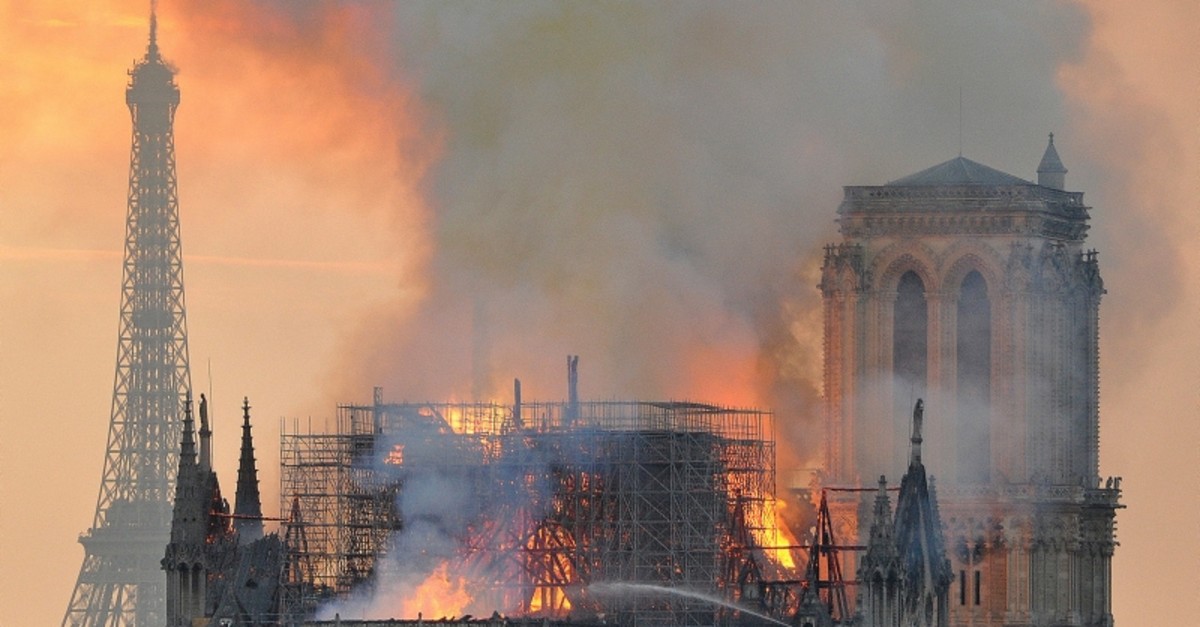 Firefighters were praised Tuesday for helping save many of the most celebrated treasures of Notre-Dame by dashing inside the burning cathedral, but officials warned that others were in a precarious state or entirely lost in the flames.

While the Notre-Dame cathedral is venerated as a masterpiece of medieval architecture, it also houses outstanding examples of Western art as well as holy relics.

Rescuers and church officials formed a human chain on Monday night to whisk away as many of the treasures as possible. 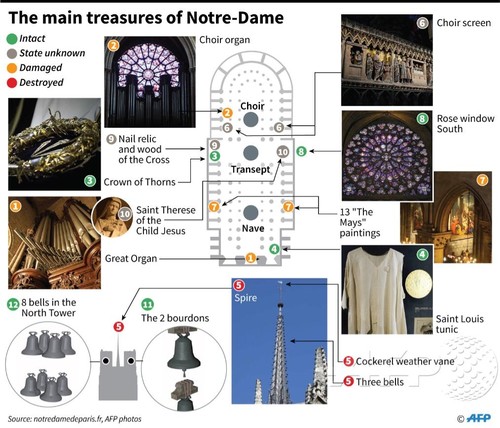 Paris mayor Anne Hidalgo tweeted a picture during the evening of candlestick holders and dozens of other artefacts in safekeeping at a room at the town hall.

Here is what we know:

The Holy Crown of Thorns, believed by Catholics to have been worn by Jesus Christ at his crucifixion so Roman soldiers could mock him, was spirited out of the building and is being kept safe at Paris town hall.

It is about 21 centimetres (eight inches) in diameter and made up of rushes braided together and bound by gold wire.

Firefighters were also directed to the tunic thought to have been worn by 13th-century French crusader king, Louis IX, who was made a saint.

Culture Minister Franck Riester said both objects, which were housed in the Cathedral's treasury, had been saved "thanks to the great courage of firefighters".

There were three holy items in the spire that collapsed in flames on Monday: a fragment of the Crown of Thorns and relics from Saint Denis and Saint Genevieve, two of the city's most cherished saints.

Of the cathedral's three organs, the most impressive is the Great Organ with five keyboards, 109 stops and close to 8,000 pipes.

Built in the 15th century, the organ was progressively added to over the centuries to become one of the largest in France.

It survived the 18th century French Revolution unscathed, even though the building was vandalised, "thanks no doubt to its use in playing patriotic music," the cathedral website says.

Philippe Lefebvre, one of three official organists at the cathedral, said while the organ "has not been burned" its structure could have suffered from other damage.

The instrument has been preserved but has been partly covered in rubble, dust and water, said Lefebvre who has been playing for 35 years at the cathedral.

"In the months to come, that is going to dry and risk provoking structural problems," he told AFP. Riester said that organ was "quite affected" by the fire.

They show prophets, saints, angels, kings and scenes of the daily lives of holy figures. At the centre of each is an image of either the Virgin Mary, Christ as a baby or Christ as king reigning over heaven.

The one on the south was intact on Tuesday, as was another on the western facade which lies between the two stone towers.

Riester said that the windows "had apparently not suffered catastrophic damage".

A mid-14th-century statue of the Virgin with Child, placed in the sanctuary, is the most famous of the 37 images of the Virgin Mary contained in the cathedral.

Another depicts Mary holding the body of her son descended from the cross, created by French sculptor Nicolas Coustou between 1712 and 1728 and positioned behind the choir altar.

Riester said more information on the state of all the treasures would be available when it was safe to fully inspect the interior of the cathedral whose structure is being reinforced to prevent it from falling.

Between 1630 and 1707 the Paris goldsmith guild presented the cathedral with a painting on every May 1. Of these 76 works called "The Mays", 13 were displayed in various chapels in the cathedral.

On the west wall of the Chapel of Saint-Guillaume is the one considered to be the most beautiful paintings called the "Visitation" by Jean-Baptiste Jouvenet (1716).

Riester said paintings had been damaged by the smoke and water and would from Friday be transported to the Louvre museum for restoration and dehumidifying.

"The fire did not touch the pictures, but in these cases the damage is due to water," he said.

The largest and oldest of the cathedral's bells is known as the Bourdon Emmanuel. Cast 300 years ago, it weighs 13 tonnes, its clapper alone being 500 kilogrammes (1,102 pounds).

The tenor bell, considered one of the finest examples in Europe, is chimed only on special occasions and important Catholic events, and was joined in 2013 by nine new bells. They are believed to have survived the fire.