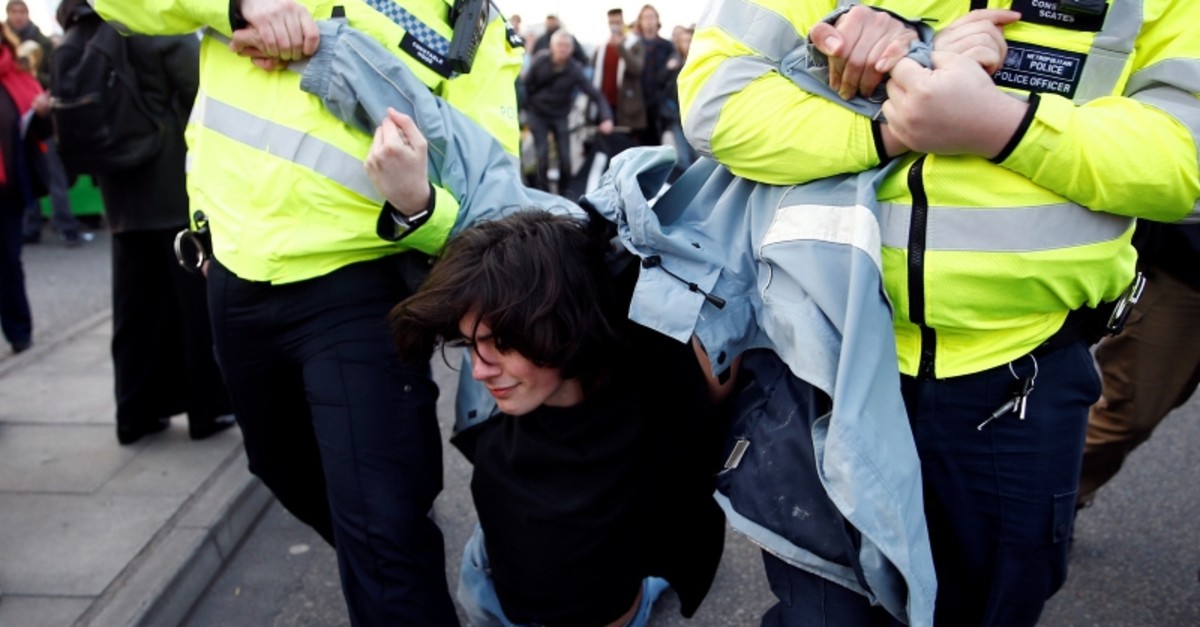 Police detain a protester as climate change activists demonstrate during a Extinction Rebellion protest at the Waterloo Bridge in London, Britain April 15, 2019. (Reuters Photo)
by Compiled from Wire Services Apr 16, 2019 11:23 am

British police have arrested 113 people after climate change activists blocked some of London's most famous roads including Oxford Circus, Marble Arch and Waterloo Bridge in an attempt force the government to do more to tackle climate change.

The protests led by British climate group Extinction Rebellion, a civil disobedience campaign that also saw action in other parts of Europe, brought parts of central London to a standstill on Monday and some stayed overnight for a second day of protest on Tuesday.

Extinction Rebellion, which generated headlines with a semi-nude protest in the House of Commons earlier this month, is demanding the government declare a climate and ecological emergency and reduce greenhouse gas emissions to net zero by 2025. It was established last year in Britain by academics and has become one of the world's fastest-growing environmental movements.

"There have been 113 arrests in total, the majority of which are for breach of Section 14 Notice of the Public Order Act 1986 and obstruction of the highway," London's Metropolitan Police said.

Tents littered the roads at Oxford Circus with some activists huddled beneath a pink boat with the words "Tell the Truth" across its side. One placard read: "Rebel for Life."

Police said five of those arrested had been detained after the U.K. offices of energy giant Royal Dutch Shell near the River Thames was targeted.

Two protesters on Monday scaled up scaffolding writing 'Shell Knows!' in red paint on the front of the building and three protesters glued their hands to the revolving doors at the entrance.

The protest saw more than a thousand people block off central London's Waterloo Bridge and lay trees in pots along its length. Later, people set up camps in Hyde Park in preparation for further demonstrations throughout the week.

The police have ordered the protesters to confine themselves to a zone within Marble Arch, a space at the junction of Hyde Park, the Oxford Street main shopping thoroughfare and the Park Lane street of plush hotels.

"The information and intelligence available at this time means that that Met (police) feels this action is necessary in order to prevent the demonstrations from causing ongoing serious disruption," the police said.

Spokesman James Fox said the group had attempted to maintain a blockade overnight at four sites in central London before the police came to impose the new restriction.

People were arrested "mostly at Waterloo Bridge where the police came to try to stop everyone, but there were too many of us," he told AFP.

Fox said the protesters attached themselves to vehicles and to each other using bicycle locks.

"We have no intention of leaving until the government listens to us," he said.

"Many of us are willing to sacrifice our liberty for the cause."