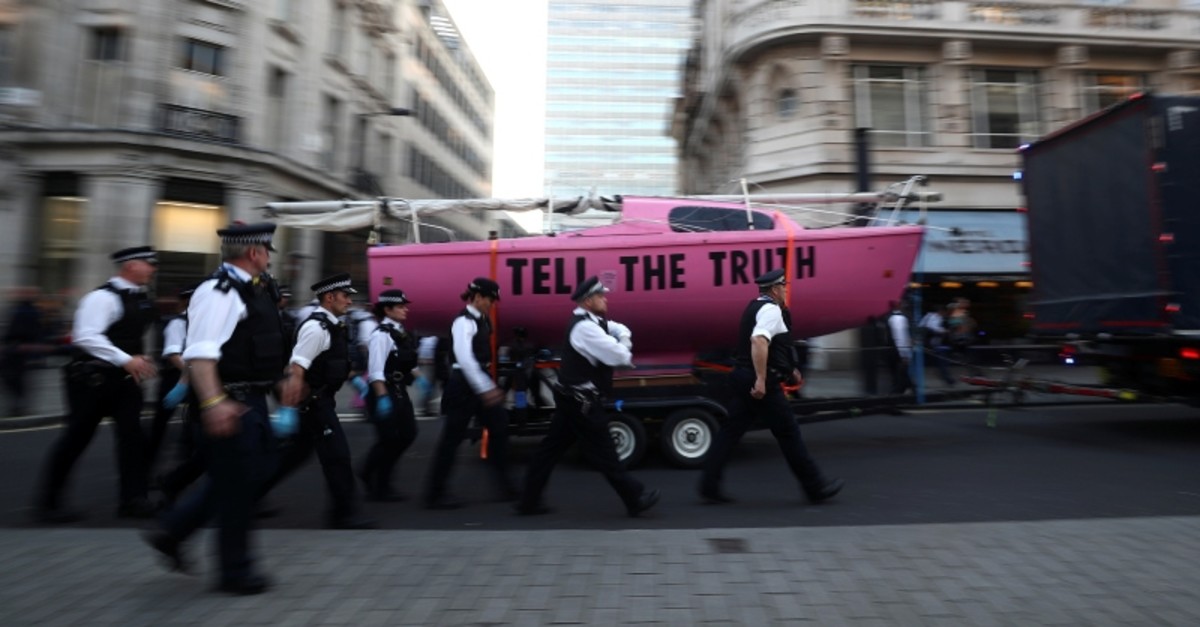 A boat which was parked at Oxford Circus is towed away, during the Extinction Rebellion protest in London, Britain April 19, 2019. (Reuters Photo)
by Compiled from Wire Services Apr 20, 2019 5:26 pm

The Extinction Rebellion environmental protests in London rumbled on into a sixth day Saturday as the total number of arrests hit 718, according to the Metropolitan Police. Some 28 people have been charged in relation to the protests, which have caused disruption for commuters in the British capital.

Demonstrators were continuing to block Waterloo Bridge in the city and the central Oxford Circus junction despite the removal by police of the pink sailing boat which had acted as a natural focal point for the movement. Oxford Street and Piccadilly Circus are among other protest sites continuing since Monday morning.

"Our planet is in serious trouble," Thompson told reporters amid a crowd of about 300 activists, according to eye witnesses. She addressed them from the pink boat before its removal as shoppers and tourists milled past.

"We are here in this island of sanity and it makes me so happy to be able to join you all and to add my voice to the young people here who have inspired a whole new movement," said Thompson, one of Britain's most acclaimed actresses who has won two Academy awards.

She was one of several actors who read poems celebrating the beauty of nature.

The activists formed a human chain around the boat, with one attached to its main mast making it extremely difficult for the police to dislodge him.

After a painstaking operation, they removed him and secured the boat, but had difficulty transporting the vessel away because more protesters continually sat in their path.

A small group of younger protesters blocked a roundabout in Heathrow Airport area Friday morning but they were removed from the roads to keep the disruption to a minimum.

The protesters, some as young as 13 and 14, held a banner alongside a busy road which read: "Are we the last generation?"

Some of the teenagers wept and hugged each other, although they were far outnumbered by police.

"I fear for my future" Oscar Idle, 17, told Reuters at Heathrow. "That fear gives me courage to act."

"I want to live in a society which is not catastrophic, where there is not going to be food shortages, wild fires and hurricanes where people can live," he said.

Heathrow Airport said that they were working with police to avoid such disturbance.

The protests are organized by the campaign group Extinction Rebellion, which was established last year in Britain by academics and has become one of the world's fastest-growing environmental movements.

Police have been trying to confine the protests to one site in London, at Marble Arch on the corner of Hyde Park, but the protesters have ignored the threat of arrest and continued to block other sites.

"We are trying our best to give the businesses a chance to return to 'business as usual'," police said.

"One thing that is unusual about this demonstration is the willingness of those participating to be arrested and also their lack of resistance to the arrests." 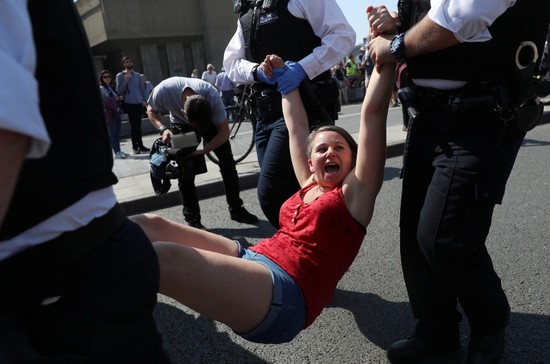 In a Twitter post, Metropolitan Police also said the "protesters are using tactics of lying on the ground when approached" and this makes "at least four officers to remove one person to ensure their safety." 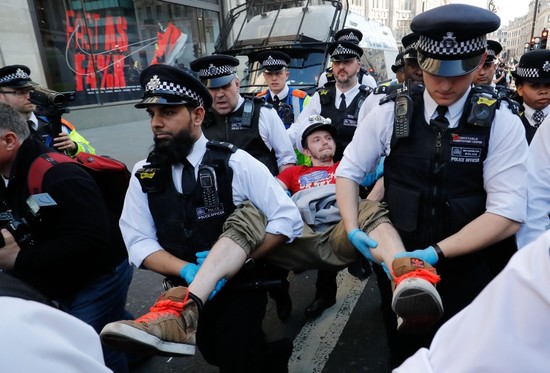 The large number of arrests has created a "logistical problem" for the police in terms of cell space and also the "wider criminal justice system." 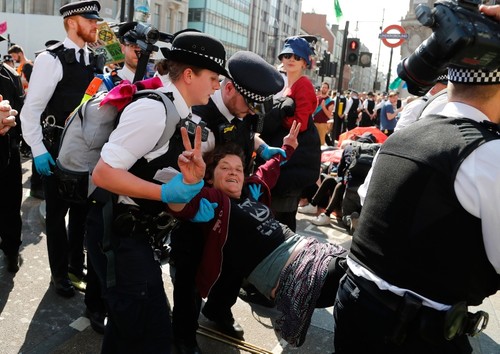 Friday is the start of a four-day-long Easter break and the Extinction Rebellion said on Twitter thousands of more people would come and join them in London.

Most of the protesters are released in a few hours after giving statements at police stations.