Assange sentenced to 50 weeks in UK jail for jumping bail 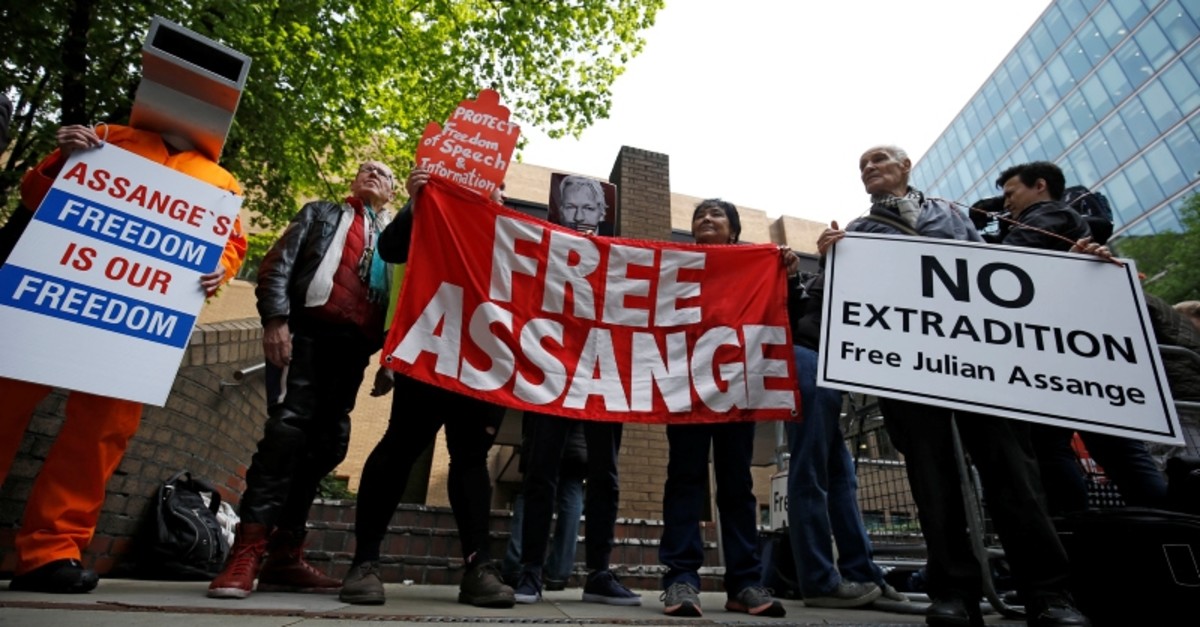 People hold signs during a protest outside Southwark Crown Court where WikiLeaks founder Julian Assange will be sentenced, in London, Britain, May 1, 2019. (Reuters Photo)
by Compiled from Wire Services May 01, 2019 2:01 pm

Wikileaks founder Julian Assange was sentenced by a London court on Wednesday to 50 weeks in jail for jumping bail in 2012.

Assange broke bail to enter the Ecuadorean embassy almost seven years ago. He was dragged out of the embassy last month and charged by the United States for one of the biggest ever leaks of classified information through breaking into a Pentagon computer system.

British Judge Deborah Taylor said Wednesday that Assange merited near the maximum sentence of one year because of the seriousness of his offense. She rejected his claim for leniency based on the nearly seven years he spent in the Ecuadorian Embassy.

Taylor said Assange had exploited his privileged position to flout the law and express his disdain for British justice.

She said Assange's seven years in the embassy had cost British taxpayers 16 million pounds ($21 million), and said he sought asylum as a "deliberate attempt to delay justice."

The 47-year-old Australian whistleblower, his shaggy beard neatly trimmed, raised his fist to supporters in the public gallery at London's Southwark Crown Court as he was taken down to the cells. They responded by raising theirs and shouting "Shame on you!" toward the court.

Assange sought asylum in the South American country's London embassy in June 2012 to avoid extradition to Sweden, where he was wanted for questioning over rape and sexual assault allegations.

He claimed the allegations were a pretext to transfer him to the United States, where he feared prosecution over the release by WikiLeaks of millions of classified documents.

At the sentencing hearing, his lawyer Mark Summers said Assange had been "gripped" by "reasonable fears" that he would face rendition to the U.S.

"As threats rained down on him from America, they overshadowed everything as far as he was concerned," the lawyer said.

In a letter read out on his behalf, Assange expressed regret, saying: "I did what I thought at the time was the best or perhaps the only thing that I could have done."

There is no longer an active investigation in Sweden and the extradition request has lapsed.

However, Assange is facing a U.S. extradition request, which was only revealed following his dramatic arrest, when he was dragged shouting from the embassy by police.

Assange appeared in court within hours of his arrest, and a judge found him guilty of breaching his bail conditions.

The biggest concern for his lawyers is the U.S. extradition request. An initial hearing in the case has been scheduled for this Thursday.

The U.S. indictment charges him with "conspiracy" for working with former U.S. Army intelligence analyst Chelsea Manning to crack a password stored on Department of Defense computers in March 2010.

Manning passed hundreds of thousands of classified documents to WikiLeaks, exposing U.S. military wrongdoing in the Iraq war and diplomatic secrets about scores of countries around the world.

Assange could face up to five years in jail if found guilty, although his team is fighting his extradition and the process could take years.

WikiLeaks is also back in the news in the United States, over its alleged role in the leak of Hillary Clinton's emails in 2016 U.S. presidential election.

The Swedish claims against Assange date back to 2010, when he was at the center of a global storm over WikiLeaks' exposures.

The sexual assault claim expired in 2015, but while the rape claim was dropped in 2017, the alleged victim wants the case reopened.

If Stockholm makes a formal extradition request, Britain must decide whether to consider it before or after that of the United States.

A group of British lawmakers has urged the Swedish case to take precedence, saying the rights of the alleged victims must not be lost in the political row.