French police clash with May Day protesters in Paris 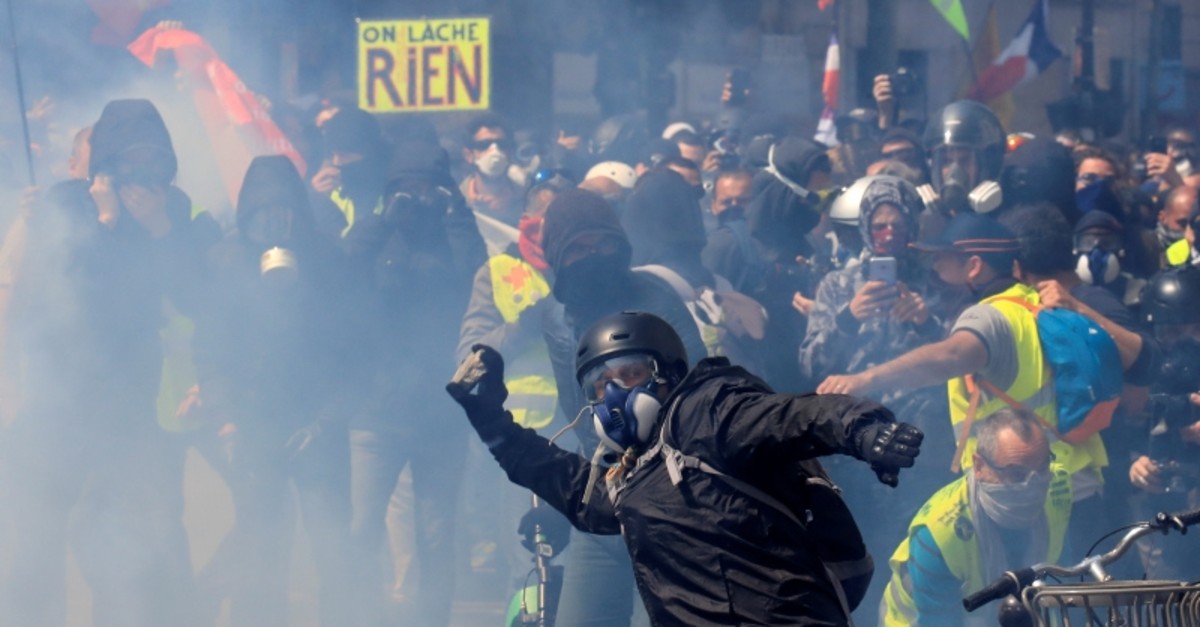 Tear gas floats around masked protesters during clashes before the start of the traditional May Day labour union march in Paris, France, May 1, 2019. (Reuters Photo)
by Compiled from Wire Services May 01, 2019 3:11 pm

French police clashed with stone-throwing protesters who set fires and smashed up vehicles as thousands of people gathered for May Day rallies Wednesday under tight security. About 165 arrests were made.

In a tense atmosphere, hundreds of so-called "black bloc" activists pushed to the front of the gathering crowd on Montparnasse Boulevard, hurling bottles and other projectiles at police in a confrontation some 90 minutes before the march was to start.

One protester suffered a head injury, an AFP journalist said.

Some threw rocks and other objects at police officers, attacked a parked van in a nearby street, kicking the vehicle and breaking its windows.

French police have banned demonstrations on the Champs-Élysées Avenue, around the presidential palace in Paris and near the Notre Dame Cathedral, which was gutted by devastating fire on April 15.

A controversial riot control device, the grenade is thrown at ground level, releasing scores of rubber pellets that cause an intense stinging to the legs within a 15-meter (50-foot) range.

With trade unions hoping to raise their profile and thuggish "casseurs" vowing to turn Paris into "the capital of rioting," the government moved to deploy security on an "exceptional scale" throughout the capital.

More than 7,400 police will be deployed, aided by drones to give them an overview of the protests and a quicker way to head off potential violence. Six armored vehicles and six water cannons were also on standby to be brought in if needed, a police source told AFP.

Among a raft of other security measures, French police ordered over 580 shops, restaurants and cafes on the Paris protest route to close. Paris police said officers carried out more than 9,000 "preventive searches" of bags and arrested 165 people before the march in identity checks at departure points into Paris, including train and bus stations.

Meanwhile, some peaceful protesters were waiting for the march to start. They were planning to head toward Place d'Italie in southern Paris.

French authorities have warned "radical activists" may join the Paris demonstration and renew scenes of violence that marked previous yellow vest protests and May Day demonstrations in the past two years.

More than 7,400 police are deployed in the French capital.

French police ordered the closure of more than 580 shops, restaurants and cafes on the Paris protest route and numerous subway stations were shut.

Authorities are particularly wary of the black-clad, masked and hooded extremists who have joined recent protests with the express goal of attacking police and damaging property. They often target symbols of capitalism or globalization, and turned out in the hundreds at last year's May Day protest.

Paris has been scarred by looting, arson and violence during the past few months of "yellow vest" protests over economic grievances, and French authorities are haunted by the serious violence that has broken out at May Day demonstrations in the past two years.

French President Emmanuel Macron last week tried to address the complaints of the yellow vest movement by announcing tax cuts for middle-class workers and an increase in pensions. But many yellow vest supporters consider the government's plans insufficient, and want to keep alive the movement that started in November to oppose a fuel tax and quickly expanded into broad public rejections of Macron's economic policies.