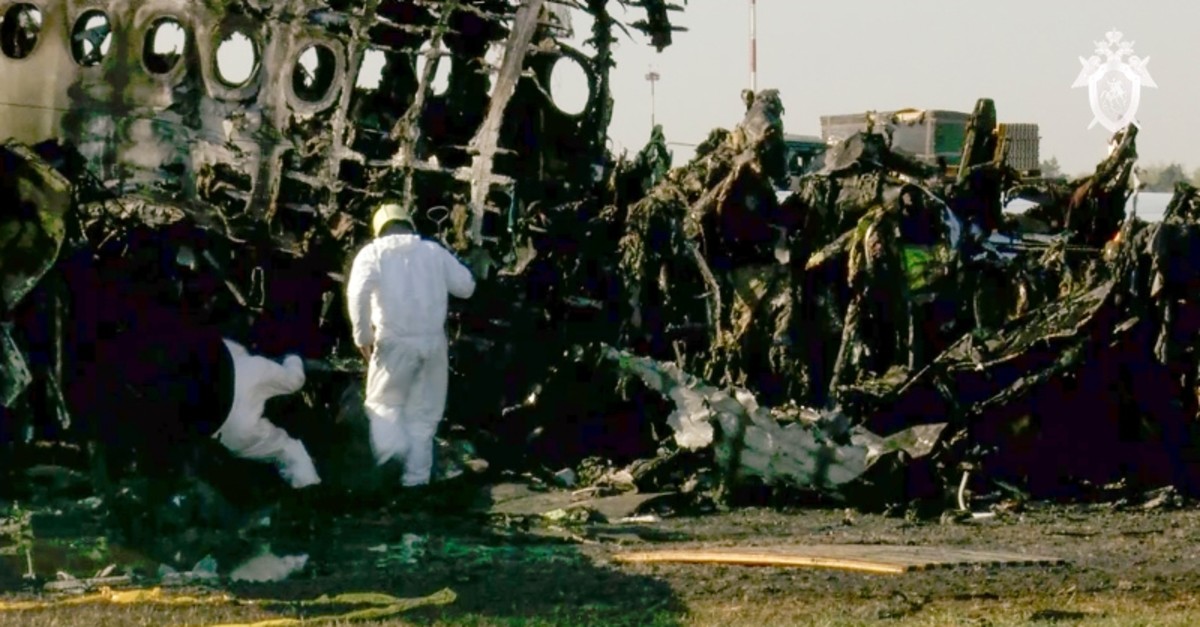 This photo taken from a video distributed by Russian Investigative Committee on Monday, May 6, 2019, shows employees working at the wreckage of the Sukhoi SSJ100 aircraft at Moscow's Sheremetyevo airport. (AP Photo)
by Compiled from Wire Services May 06, 2019 1:10 pm

The pilot of a Russian passenger plane that erupted in a ball of fire on the runway of Moscow's busiest airport, killing 41 people, said lightning led to the emergency landing.

Russian emergency workers have recovered 41 bodies and two flight recorders from the wreckage of the plane, officials said Monday as they sought to discover the cause of the disaster.

Transport Minister Yevgeny Dietrich gave the death toll and said six of the survivors had been hospitalized. The plane, an Aeroflot SSJ100, was carrying 78 people, including five crew members.

Dietrich added that Russia sees no reason to ground its domestic-made Sukhoi Superjet 100 aircraft after the incident.

The plane caught fire Sunday evening about 6:30 p.m. as it came down hard on the runway at Moscow's Sheremetyevo Airport after turning back from a flight destined for Murmansk. The landing occurred about a half hour after takeoff, indicating that the plane had little time to dump its fuel.

One of the dead was flight attendant Maxim Moiseev, Dietrich said. Russian news reports, citing unnamed sources, said the Moiseev was in the back part of the plane, which was engulfed in flames and tried unsuccessfully to deploy an evacuation slide.

Russia's main investigative body said both of the plane's flight recorders — data and voice — have been recovered. Committee spokeswoman Svetlana Petrenko was also quoted by Russian news agencies on Monday as saying that investigators were looking into three main possibilities behind the cause of the disaster: inexperienced pilots, equipment failure and bad weather.

Storms were passing through the Moscow area as when the plane made its emergency landing.

Pilot Denis Yevdokimov told Russian media the craft lost communication and needed to switch to emergency control mode "because of lightning" on the Aeroflot flight to the Arctic city of Murmansk.

He did not specify if the plane was struck directly.

"We managed to restore communication through the emergency frequency on our radio connection. But the link was only for a short time and kept cutting out... it was possible to say only a few words," he told the Komsomolskaya Pravda newspaper.

Videos on social media showed the plane crash-landing and then speeding along the runway with flames pouring from its fuselage.

Passengers could be seen leaping onto an inflatable slide at the front and running from the blazing plane as columns of black smoke billowed into the sky.

Another video shot inside the cabin showed roaring flames outside the window and passengers crying out in panic.

Several of the 78 people on board said they believed lightning was the cause of the tragedy, which came at the end of several days of public holidays following Workers' Day on May 1.

Pyotr Egorov, also on board, told media: "We had just taken off when the plane was hit by lightning... the landing was very hard, we almost passed out from fear.

"The plane bounced on the tarmac like a grasshopper and burst into flames on the ground."

Russia's national carrier Aeroflot was once notorious for its poor safety record but in recent years its image has improved and it has not had a fatal accident in more than a decade.

The Russian Sukhoi Superjet 100 however has been dogged with problems since its launch in 2011.

In 2012, a Superjet performing at an Indonesian air show slammed into a volcano, killing all 45 people on board. Indonesia blamed the crash on pilot error.

Technical problems with the plane have been reported in recent years and Russia has struggled to convince foreign carriers to purchase it.

The government offered subsidies to encourage Russian airlines to buy the Superjet and Aeroflot has became its main operator.

The Murmansk region -- where many of those killed or injured are believed to be from -- went into a three-day period of mourning from Monday.

Other Aeroflot flights are expected to be affected in the coming days.

Russian President Vladimir Putin offered his condolences to the victims' loved ones and said the investigation "should be as thorough as possible," according to the Kremlin.