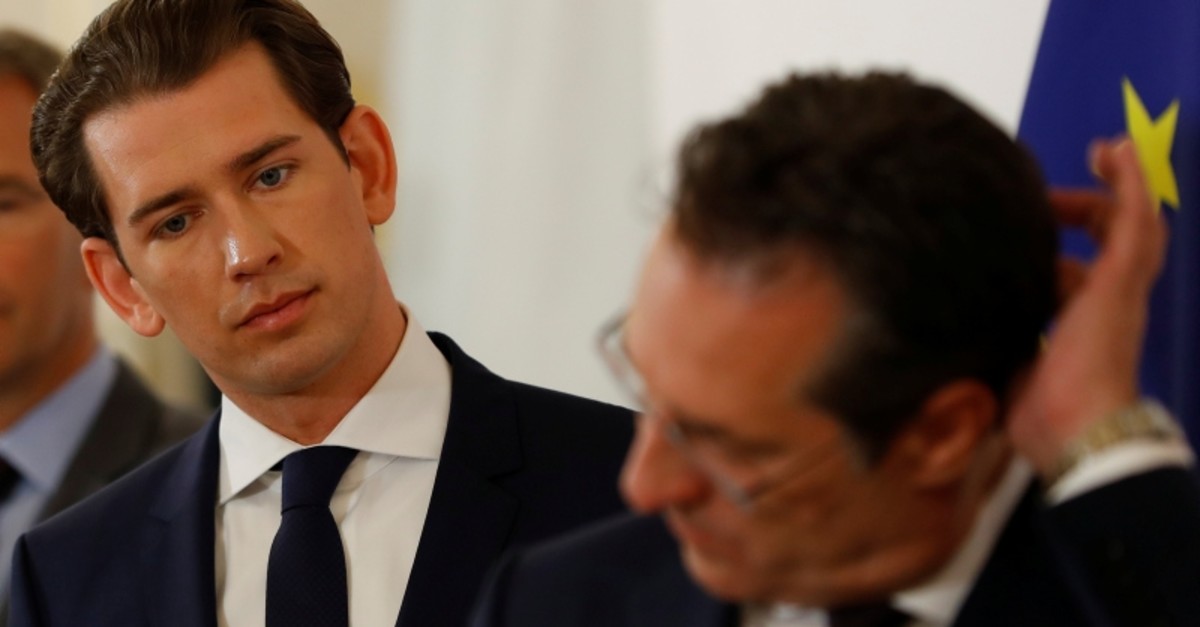 Strache said he offered his resignation to Austrian Chancellor Sebastian Kurz earlier on Saturday in order to prevent the collapse of the governing coalition between Kurz's conservative People's Party (ÖVP) and Strache's far-right Freedom Party (FPÖ).

Strache said Saturday in a statement before assembled journalists that he was illegally set up in a "political assassination," but added his behavior in the video was "stupid and a mistake." He insisted he did not break any laws.

Strache apologized to his wife and his supporters for what he called "alcohol-fuelled macho behavior partly intended to impress the attractive woman" posing as a would-be donor during the 6-hour encounter. "I behaved like a teenager," he said.

It is unclear who set up the apparent trap and who recorded the meeting. Strache blamed "criminal networks," saying that the incident had been a "targeted political attack" on Austria's right-wing government.

The scandal has led to speculation about the future of the governing coalition just a week before Austria votes in elections for the European Parliament. 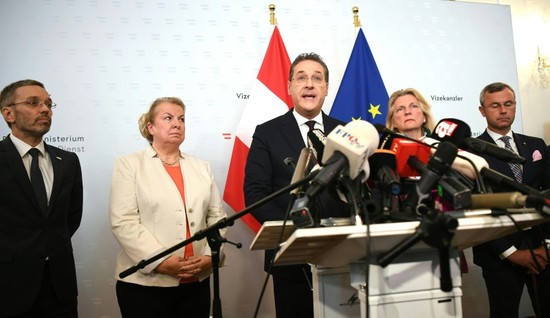 Kurz has ruled out further cooperation with Strache, dpa and Reuters reported before the press conference. Kurz met with Strache at 11 a.m. (0900 GMT) after a crisis meeting with senior figures in the government on Friday night, news agency APA said citing sources.

Conservative Austrian Chancellor Sebastian Kurz pulled the plug on Saturday on his coalition with the far-right Freedom Party after a damaging video prompted its leader to step down as vice chancellor.

"Enough is enough," Kurz said in a statement to the media, listing several lesser scandals involving the Freedom Party that did not cause their coalition to collapse. He said he would propose to Austrian President Alexander Van der Bellen that a snap election be held as soon as possible.

Kurz's party still leads opinion polls but far short of a majority. The only other party with enough seats for a majority is the Social Democrats, with which Kurz, an immigration hardliner, has difficult relations.

Strache has headed the Freedom Party since 2005, bringing it back to mainstream electoral success not seen since it was led by the charismatic Joerg Haider. He himself flirted with neo-Nazism in his youth, but as leader sought to clean up the party's image and make it more electable. It secured 26 percent of the vote in 2017's parliamentary election.

The daily Sueddeutsche Zeitung and the weekly Der Spiegel published extracts of covert video allegedly showing Strache meeting a woman claiming to be interested in investing large amounts of money in the Alpine nation. The two papers said the meeting, which took place in Spain's Ibiza in July 2017, months before Austria's parliamentary election, was clearly a trap laid to compromise the two politicians, though it's unclear who was behind it.

In the video, the source of which the newspapers declined to reveal, Strache and party colleague Johann Gudenus are heard telling the unnamed woman she can expect lucrative construction contracts if she buys an Austrian newspaper and supports the Freedom Party. Sueddeutsche Zeitung and Der Spiegel said the footage was authenticated by a forensic video expert. It couldn't be immediately independently verified by The Associated Press and Reuters, and the German newspapers did not say how they obtained it.

"It's time to end this nightmare," the head of Austria's Social Democratic Party, Pamela Rendi-Wagner, said after the reports. "Strache and Gudenus must step down today."

She urged Kurz to take responsibility for his government allies: "He chose to enter into this coalition."

Werner Kogler, a leading member of Austria's opposition Green Party, also urged Kurz to dissolve the coalition "or he himself will become untenable."

According to the two newspapers, the video spanned some six hours of drink-fueled conversation in a villa on the Spanish island of Ibiza between the Austrian politicians and a woman claiming to be the niece of a prominent Russian businessman. Aside from discussing possible investments in Austria, including the purchase of influential tabloid newspaper Kronen Zeitung, Strache also appears to suggest ways of funneling money to his party via an unconnected foundation to circumvent Austrian rules on political donations.

"If she takes over the Kronen Zeitung three weeks before the election and get us into first place, then we can talk about everything," Der Spiegel quoted Strache as saying in the video.

Strache held out the prospect of awarding her public contracts in road construction if she helped the FPÖ succeed, according to the video.

He appeared to offer to direct inflated construction contracts to a company in exchange for support for his party, though he also said he wanted everything to be done legally.

There is no indication that any of the discussed Russian investments took place before or after the parliamentary elections, in which the Freedom Party came third with almost 26% of the vote.

Neither Strache nor Gudenus could immediately be reached for comment. Spiegel reported that the men confirmed taking part in a private meeting on Ibiza, but denied any wrongdoing.

The FPÖ's General Secretary, Christian Hafenecker, said the party's lawyers were evaluating the material. Neither Strache nor the Freedom Party ever received or granted any benefits from the persons concerned, Hafenecker said in a statement.

"Since the video was obviously recorded illegally, we are also preparing appropriate legal steps."

Kurz has distanced himself from the far right to protect his image when lesser scandals have emerged.

"This is huge. This has to be the end of Heinz-Christian Strache," political analyst Thomas Hofer said, adding that even a snap election was possible.

Strache is seen suggesting that new owners could make staff changes at the Krone and use the paper to help his Freedom Party (FPOe) in its election campaign. He goes on to suggest the woman would then be able to gain access to public contracts.

According the newspapers, Strache says that there would be no resistance among the Krone's editorial staff as "journalists are the biggest whores on the planet." Both the newspapers that published the footage say they don't have any firm information over who set up the elaborate sting.

The Kronen Zeitung took a particularly outraged tone in its coverage, with its Saturday edition sporting a banner headline reading "The FPÖ is done for!"

The Die Presse newspaper's headline talks of a "coalition on the brink."

Elsewhere in the video Strache evokes the possibility of privatizing part of Austria's public broadcaster ORF and says he would like Austria's media landscape to resemble that of neighboring Hungary.

Hungary's right-wing nationalist Prime Minister Viktor Orban is the target of criticism for overhauling the country's public media into a government propaganda organ while allies have steadily bought up swathes of the private media sector. The FPÖ has mounted repeated attacks on the ORF's coverage, accusing it of being biased against the party.

In recent weeks Kurz has already had to defend his decision to enter government with the far-right after a string of revelations about extremist sympathies in the FPÖ's ranks.

The putative link to Russia in the scandal is particularly embarrassing as the FPÖ has a cooperation agreement with Russian President Vladimir Putin's United Russia party, leading many to accuse the FPÖ of an overly close relationship with Moscow.

The FPÖ's lead candidate in next week's elections, MEP Harald Vilimsky, canceled a planned trip to Milan on Saturday where he was due to take part in a campaign event with far-right Italian Interior Minister Matteo Salvini.