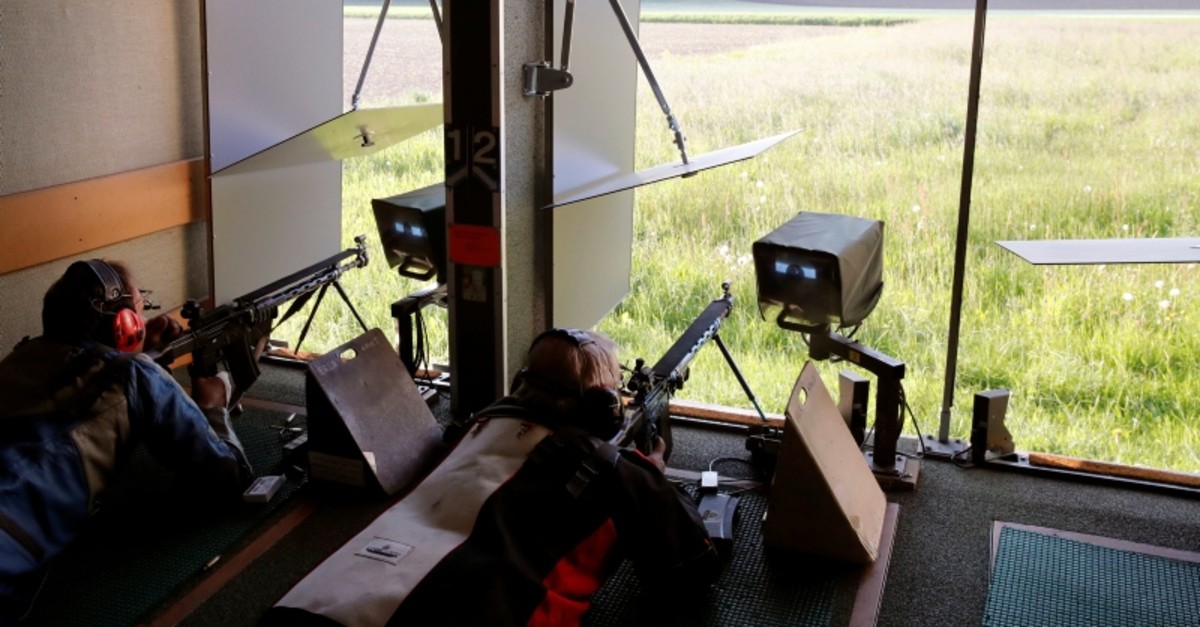 Two men point their rifles at targets 300 metres away at the shooting range of the Schuetzenverein Ossingen rifle club in Ossingen, Switzerland. (Reuters Photo)
by May 19, 2019 6:38 pm

The Swiss voted Sunday to toughen their gun laws and bring them in line with EU legislation, heeding warnings that rejecting the change could have threatened relations with the bloc.

A majority of voters in all but one of Switzerland's 26 cantons backed the reform, with the Italian-speaking canton of Ticino in southern Switzerland the only outlier.

A demand from the neighboring European Union that the Swiss toughen their gun laws prompted a rare national debate over firearm ownership in the wealthy Alpine nation, which has a deeply-rooted gun culture.

While the government cautioned that the new legislation was crucial to the non-EU country maintaining its treaties with the bloc, the proposal sparked a fierce pushback from the gun lobby and shooting enthusiasts, who gathered enough signatures to trigger a vote under Switzerland's famous direct democratic system.

Brussels changed its own weapons laws two years ago following a wave of deadly terrorist attacks across Europe, slapping bans on certain types of semi-automatic firearms.

While not an EU member, Switzerland is bound to the bloc through an array of intricately connected bilateral agreements.

Bern had cautioned that a "No" vote would lead to Switzerland's exclusion from the visa-free Schengen travel region and also the Dublin accords regulating Europe's asylum-seeking process.

This would have far-reaching consequences for security, asylum and even tourism, and would cost the country "several billion Swiss francs each year," it said.

The shooting enthusiasts behind Sunday's referendum had insisted the government warnings were "exaggerated".

The campaign charged that law change amounts to an "EU dictate" that reins in Swiss sovereignty and would "erase the right to own weapons" in Switzerland.

The ProTell gun lobby voiced concern at the consequences of Sunday's referendum, in which some 43 percent of eligible voters participated.

"Today, our liberties have been eroded," ProTell President Jean-Luc Addor told RTS, also insisting that the reform would "obviously not avoid a single terrorist attack".

The populist, right-wing Swiss People's Party (SVP) -- the only party to oppose the reform -- meanwhile cautioned that bowing to an "EU dictate" would have consequences.

"We acknowledge that there is a certain need to remain within Schengen and Dublin, but we cannot accept just anything to do so," SVP vice president Celine Amaudru told the ATS news agency, cautioning that the EU going forward "will be able to dictate what it wants" by playing to Swiss fears of being left out.

It is difficult to know exactly how many firearms are in circulation in Switzerland, since guns are registered regionally and there is no national registry.

But according to a 2017 report by the Small Arms Survey, the country boasts the world's 16th highest rate of gun ownership, with some 2.3 million firearms in civilian hands, nearly three for every 10 inhabitants.

The strong gun culture in Switzerland is partially tied to its tradition of national defense service, as most Swiss men undergo obligatory military service between the ages of 18 and 30. They are allowed to keep their assigned weapon when they are done.

Under the new gun law, which has already been approved by legislators, semi-automatic weapons with high-capacity magazines will be listed as "banned".

Collectors and sports shooters could still purchase such weapons, but would need to jump through more hoops to obtain an "exceptional authorization".

Another issue put to a national referendum Sunday, a government proposal to overhaul the country's corporate tax system and pump more cash into its pension system, also won overwhelming support.

A full 66.4 percent of voters, and all 26 cantons, supported that reform, according to the final results.