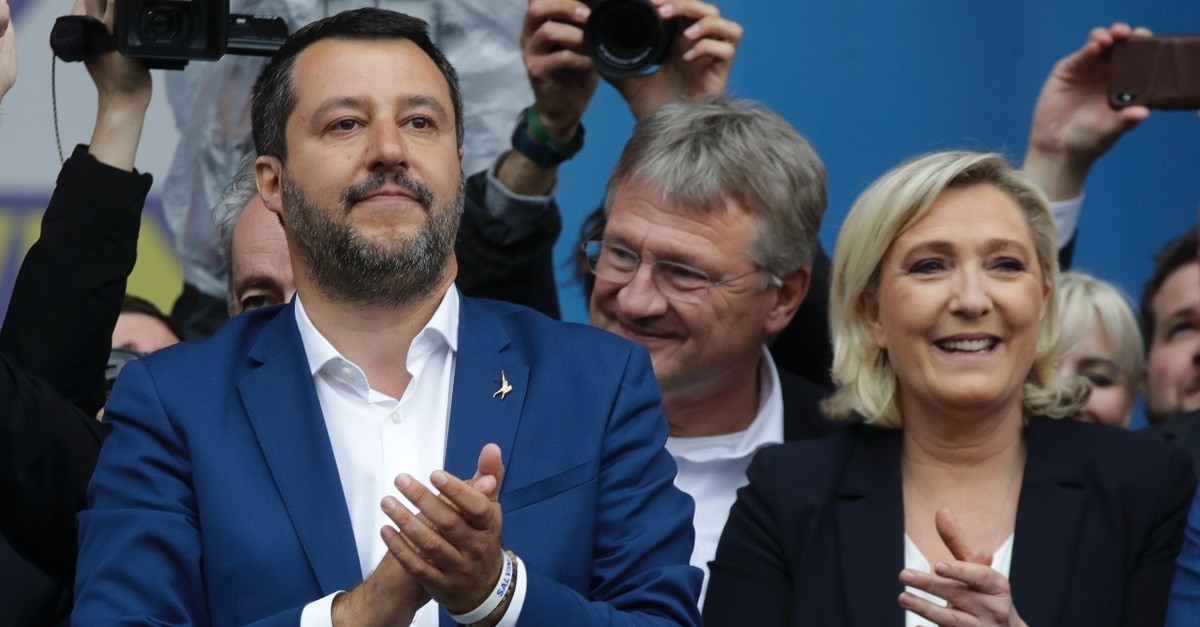 Ahead of this week's European Parliament elections, Europe's far-right and populist leaders have made one of the strongest challenges to the European status quo in decades

As more than 400 million Europeans are heading to the polls this week in all 28 EU countries, nationalists, right-wing populists and euroskeptic conservatives hope to break apart the cozy Brussels consensus.

Right-wing populist leaders from around Europe celebrated their vision for historic change on the continent at a rally in Milan on Saturday, aiming to create a pan-European alliance of far-righters seeking to upend EU politics, traditionally dominated by center-right, liberal and center-left parties. It was a major tour de force for the expanding movement ahead of the May 23-26 vote that will take place in all 28 EU nations.

Thousands gathered in front of the city's famous Duomo, or cathedral, to celebrate the anti-migrant Interior Minister Matteo Salvini, the head of Italy's right-wing League party, and his new alliance of nationalist parties. Those present at the rally included Marine Le Pen, who heads France's National Rally; Dutch populist Geert Wilders; and Joerg Meuthen, leader of the Alternative for Germany (AfD) party. "We have initiated a new political era," Meuthen said in a speech at the rally. He accused "arrogant technocrats" of destroying Europe and pledged to bring down political elites.

Le Pen, in her speech at a meeting in Milan, said she reiterated her idea to form a "super group" with other like-minded political parties in the next European Parliament. She said that such an alliance could alter the structure of the European Union for the "first time in decades," calling the prospect "inspiring." Le Pen said French President Emmanuel Macron, who sees himself as Europe's savior, should step down if he did not come out ahead in the elections.

Despite the political setback for a key member of the Europe of Nations and Freedom parliamentary group, Le Pen predicted the group "will perform a historic feat, moving from the eighth place in Europe to third or maybe second" among major political groups in the European Parliament.

The far right is expected to do well in the upcoming elections, but uniting them in a single alliance is a difficult task. Polling at the start of the campaign period pointed to around 173 members being elected from these groups, even if their own differences would make it hard for them to unify as one voting bloc. The parties in the group share the broad goals of returning power to EU member states, curbing immigration and prompting Islamophobia in the bloc. But they often have different social and economic policies, including budgetary discipline, meaning they might struggle to put forward a coherent policy agenda.

Meanwhile, on Saturday, the far-right gathering in Milan attracted counter-demonstrations by left-wing groups and politicians. Banners hanging from nearby buildings called for a "return to humanity" and "only bridges, no walls." France and Germany are the two heavyweights in Europe, and the two also count on cooperation from pro-European governments of Belgium, the Netherlands, Spain, Portugal and others.

German Chancellor Angela Merkel said Saturday that European politicians "must stand up to" far-right politicians "for sale," after a hidden-camera sting brought down nationalist Austrian Vice Chancellor Heinz-Christian Strache over allegations he was open to corruption. While far-right parties rejected values like protecting minorities and basic human rights, Merkel told a press conference in the Croatian capital Zagreb, "politicians being for sale plays a role and we must act decisively against all of that." Germany's Der Spiegel and Sueddeutsche Zeitung on late Friday published video recordings, allegedly showing Freedom Party (FPOe) leader Strache promising public contracts in return for campaign help from a fake Russian backer.

In the face of Brexit crisis and rising nationalism, Chancellor Merkel told a press conference in Croatian capital Zagreb, "Patriotism and the European project are not opposites." "Nationalism is the enemy of the European project, and we have to make that clear in the last days before the election," she added. After hours of chanting and whistling, thousands of demonstrators on Saturday cheered the collapse of Austrian Chancellor Sebastian Kurz's government over a corruption scandal, and the snap elections which will take place in September.