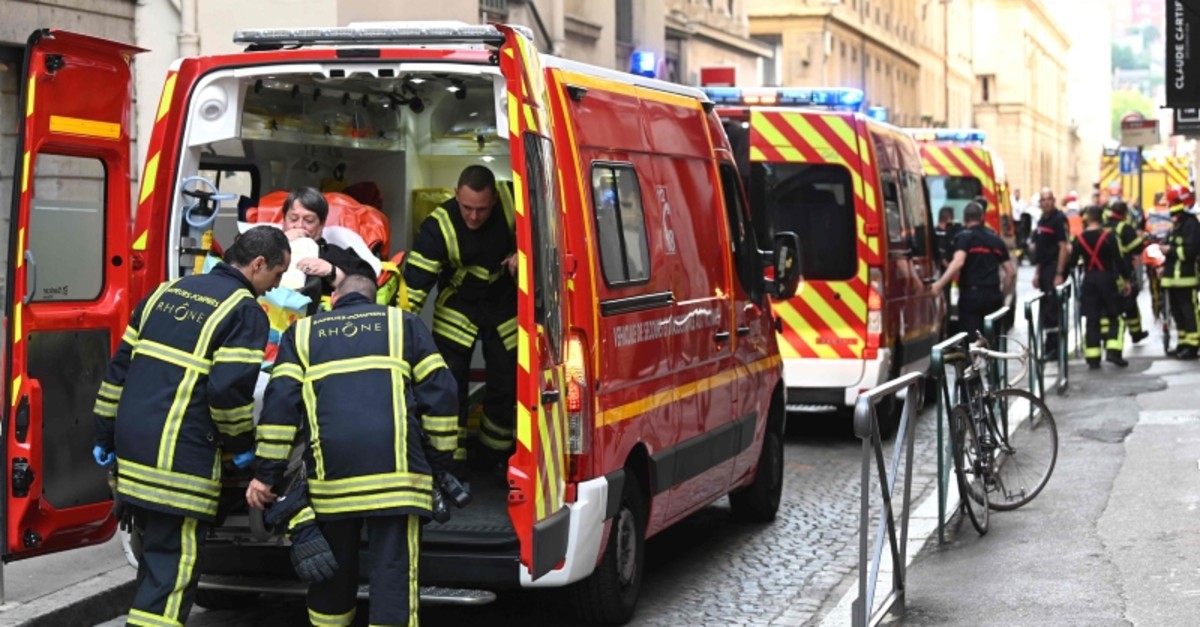 Emergency workers attended to an injured person in the back of an ambulance after a suspected package bomb blast along a pedestrian street in the heart of Lyon, southeast France, the local prosecutors' office said on May 24, 2019 (AFP Photo)
by Compiled from Wire Services May 24, 2019 7:30 pm

French President Emmanuel Macron called a package blast on a pedestrian street in the heart of the city of Lyon on Friday an "attack" after the device wounded more than a dozen people just two days ahead of the country's hotly contested European Parliament elections.

Police were hunting a man believed to be in his early 30s on a mountain bicycle who witnesses and security cameras saw in the area immediately before the explosion.

The number of injured stood at 13 people, with 11 taken to hospitals, a source close to the inquiry said. None of the injuries was life-threatening.

A police source said the package contained "screws or bolts." It had been placed in front of a bakery near a busy corner of two popular streets at around 17:30 p.m. (1530 GMT) on a balmy spring evening.

The blast occurred on a narrow strip of land between the Saone and Rhone rivers in the historic center of the southeast city. The area was evacuated and cordoned off by police.

"There was an explosion and I thought it was a car crash," said Eva, a 17-year-old student who was about 15 meters (50 feet) from the site of the blast.

"There were bits of electric wire near me, and batteries and bits of cardboard and plastic. The windows were blown out," he said.

Macron, speaking in a live Facebook interview, said: "It's not for me to give a toll but it appears there are no fatalities. There have been injuries, so obviously I'm thinking of these injured and their families."

The attack upended last-minute campaigning ahead of the European Parliament vote on Sunday with Prime Minister Edouard Philippe canceling his appearance at his centrist party's final rally Friday night.

A terrorism probe was opened by the Paris prosecutor's office, which has jurisdiction over all terror cases in the country. Interior Minister Christophe Castener was on his way to Lyon.

"An eight-year-old girl was wounded.... We're fairly relieved because apparently there were no serious injuries but on the other hand, we are certain it was an explosive device," said Denis Broliquier, mayor of the city's Second Arrondissement.

He said the suspect sought by police had been seen on video surveillance cameras.

Shortly after evacuating the area, police expanded the security perimeter after two abandoned bags were found in a children's park at the nearby Bellcour square, though bomb disposal teams later determined they were harmless.

"I was working, serving customers, and all of a sudden there was a huge boom," said Omar Ghezza, a baker who works nearby.

"We thought it had something to do with renovation work. But in fact it was an abandoned package," he said.

France has been on high alert following a wave of deadly terror attacks since 2015 which have killed more than 250 people.

"It's an area in the very center of Lyon, a major street," the city's deputy mayor in charge of security, Jean-Yves Secheresse, told BFM television.

"These areas are highly secured, the police are continually present," as were patrols by soldiers deployed in a long-running anti-terror operation, he said.

Lyon is the third-biggest city in France. The population of the city plus its extensive suburbs is 2.3 million.

The most recent package bomb in France dates back to December 2007, when an explosion in front of a law office in Paris killed one person and injured another. Police never found who carried out that attack.