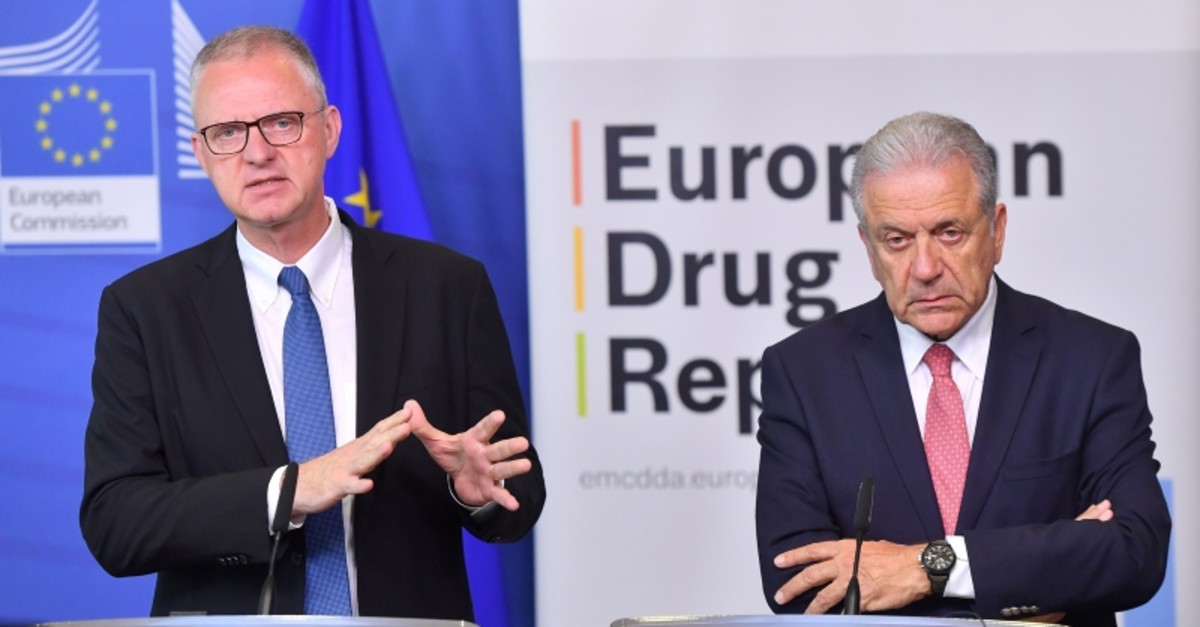 European authorities are seizing record quantities of increasingly pure cocaine, the EU's drugs agency said in a report published Thursday, pointing also to a growing use of synthetic drugs and dealing via smartphones.

The rise in trafficking on social media, darknet markets and cocaine "call centers", where dealers deliver quickly to users who order online, are creating a "potential Uberisation" of the drugs trade, the study said.

"The challenges we face in the drugs area continue to grow," said Alexis Goosdeel, head of the Lisbon-based European Monitoring Centre for Drugs and Drug Addiction (EMCDDA).

Not only are there signs that established plant-based drugs like cocaine are increasingly available, but, he said, "synthetic drugs and drug production within Europe are growing in importance."

The report noted that synthetic drug production in Europe appears to be "growing, diversifying and becoming more innovative." It listed fentanyl - the substance linked to an opioid epidemic in the United States and Canada - as a particular concern.

Last year, 55 new psychoactive substances were detected in the European Union for the first time, bringing the total number monitored by the EMCDDA to 730, it said.

Dimitris Avramopoulos, EU Commissioner for Home Affairs, said the EU and its partners "need to look at the role of digitalization in the drug market," adding: "We have no time to spare."

Here are the report's key findings:

Belgium accounted for the highest proportion of cocaine seizures (45 tons), followed by Spain (41 tons). An increase in trafficking via shipping containers is a "major challenge", it said.

The purity of cocaine at street level reached its highest level in a decade in 2017, although its retail price has remained stable.

The MDMA content of the party drug ecstasy also reached a 10-year high the same year. Although an international crackdown on chemicals used to produce that synthetic drug disrupted the market in the late 2000s, producers have increasingly been using non-controlled chemicals to manufacture it.

Cannabis accounted for nearly three-quarters of illicit drugs seizures in the EU in 2017. Herbal cannabis (marijuana) consumed in Europe is mainly cultivated in Europe, but cannabis resin (hashish) tends to be imported from Morocco, and increasingly from conflict-torn Libya.

Almost three-quarters (72 percent) of cannabis resin seized in the EU in 2017 was in Spain whose proximity to north Africa makes it a hub for sending drugs to Europe.

EU-candidate country Turkey is a significant transit country for drugs trafficking between Europe and the Middle East, despite its strict drugs laws.

It seized more MDMA tablets (8.6 million) and more amphetamine (6.6 tonnes) than all the EU member states combined in 2017.

There were also more heroin seizures (129,000) in Turkey than all EU countries combined.

Since 2014, Turkey has participated in the EMCDDA's work and is a full member of the management board though without the right to vote.

Synthetic drugs -- which mimic the effects of natural drugs such as heroin -- have become more common, the report said.

Eleven new synthetic opioids were detected in Europe in 2018, usually in the form of powders, tablets and liquids, it said.

With only very small volumes needed to produce many thousands of street doses, these substances are easy to conceal and transport, representing a challenge for law enforcement and customs.