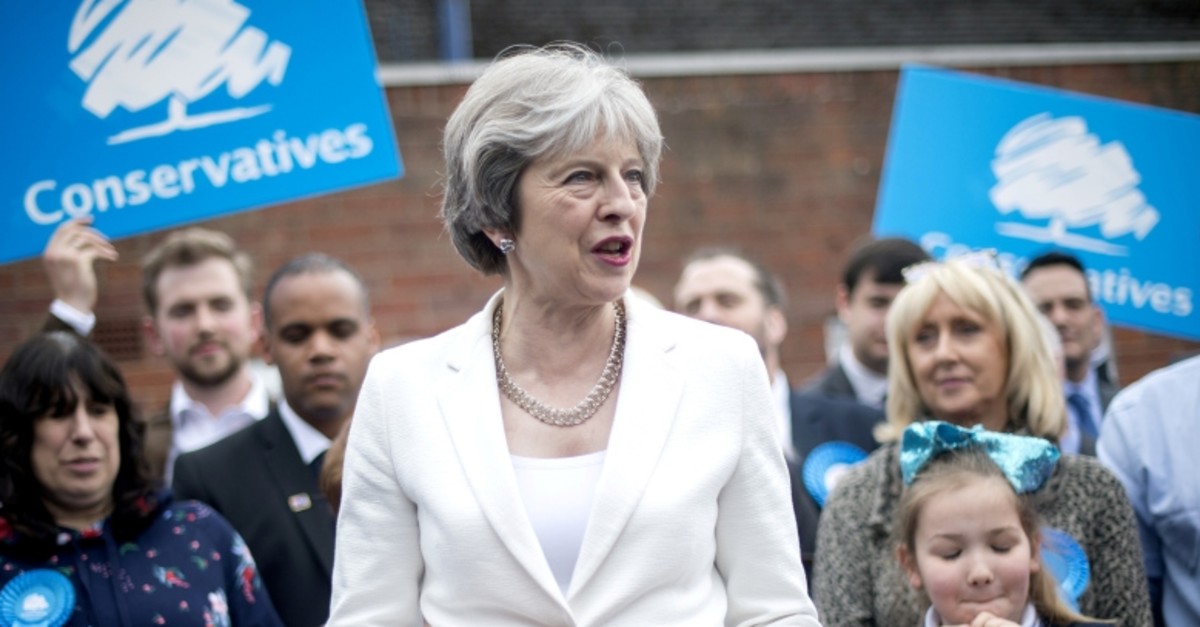 British Prime Minister Theresa May stepped down as leader of the Conservative Party on Friday, formally triggering the race for a successor who will try to deliver Brexit where she failed.

May will remain prime minister until a new leader is chosen, likely in late July, but has relinquished control over the direction of Britain's departure from the European Union.

After many delays, Brexit is still scheduled for Oct. 31 of this year, but while her rivals thrash it out, the only divorce plan agreed on with Brussels got stuck in Parliament yet again.

May took office after the 2016 referendum vote to leave the EU and has spent the past three years working on a plan, delaying Brexit twice to try to get it through, as opposed to delivering a "no-deal" Brexit.

However, she finally acknowledged defeat in a tearful resignation speech last month, the culmination of years of political turmoil that has slowly sapped all of her authority.

Eleven Conservative parliamentarians are currently vying to replace her, including former foreign minister and popular front-runner Boris Johnson, but some are expected to drop out before Monday's deadline for nominations.

The winner will have only a few months to decide whether to try to salvage May's plan, delay Brexit again or sever ties with Britain's closest trading partner with no agreement at all. The latter option, a no-deal exit, is the most likely route to be taken should Johnson assume the office of prime minister.

Frustrated and angry voters are turning away from the big parties to the upstart Brexit Party led by Nigel Farage, who has called for a no-deal option and whose party topped European polls last month, and — on the other side of the European divide — the Liberal Democrats and Greens, who want Britain to remain in the EU.

Farage's party, however, suffered a setback on Friday after narrowly missing out on winning its first parliamentary seat, losing to Labour in a by-election in the eastern city of Peterborough by just 683 votes.

Despite winning, Labour's vote share fell by 17 percent, while the Tories plummeted by 25 percent, highlighting the task facing May's successor as well as ever-increasing political disenfranchisement with the establishment, and with politics in general, in the United Kingdom.

Polling guru John Curtice told the BBC that the result showed Britain was now in a "different political world."

Leadership contest front runner Johnson warned that the center-right Conservatives "must deliver Brexit by October 31 or we risk Brexit Party votes delivering Corbyn to No 10", referring to leftist Labour leader Jeremy Corbyn getting into Downing Street.

Meanwhile, leadership rival Jeremy Hunt, the foreign minister, warned that there was "no future for our party" until Britain leaves the EU.

May will formally relinquish her leadership in a private letter to her party on Friday, but no official events are planned to mark the day.

She put on a brave face this week when hosting U.S. President Donald Trump for a state visit, before joining him and other world leaders to mark 75 years since the 1944 D-Day landings on June 6.

Trump focused his attention on Johnson and other candidates vying to replace her, emphasizing where the political power in Britain now lies. He has also suggested letting Nigel Farage negotiate Brexit with the EU.

"She remains prime minister for a good few weeks yet," May's spokesman insisted, noting that any successor must meet Queen Elizabeth II and assure the monarch they have the support of enough lawmakers to take over.

He said May would focus on domestic issues, but "in relation to Brexit, the prime minister said it wouldn't be for her to take this process forward."

Nominations for the contest must be submitted on Monday, and the 313 Conservative members of Parliament, including May, will hold the first of a series of secret ballots on June 13.

With the weakest performers eliminated each time, the goal is to have two candidates left by June 20. They will then be put to a postal ballot of an estimated 160,000 party members, and the contest should be completed by the week commencing July 22.

Johnson, a leading campaigner in the 2016 referendum who quit the government last year over May's plan, is among several would-be candidates who say they are willing to leave the EU without a deal if necessary.

Johnson cleared one hurdle on Friday by fending off a legal action brought by a citizen who accuses him of misconduct in public office for making misleading statements during the 2016 campaign about how much money Britain sends to the EU.

Judge Michael Supperstone said the High Court was "quashing the decision of the district judge" to summons the former foreign secretary, bringing an end to the case.

Johnson's lawyers told the court that the earlier ruling ordering him to answer the claims "erred in law" and that the former London mayor was the victim of a "politically-driven process."

Johnson is one of several contenders — including Environment Secretary Michael Gove, Foreign Secretary Jeremy Hunt and Health Secretary Matt Hancock — promising to go back to Brussels and make changes to the Brexit deal.

"I believe that European leaders want to find a way through this," Gove wrote in the Daily Mail. He said Britain was "on course to leave by October 31," but he'd be willing to agree to a further delay if needed to finalize a deal.

But the chances that Britain's 27 EU partners would consider reopening the legally binding divorce agreement appear slim at best. Even as the Brexit saga has dragged on and the pressure of a potentially disastrous "no deal" Brexit mounted, no European leader has publicly shown an appetite for renegotiating any part of the 585-page text.

"There will be no renegotiation," European Commission President Jean-Claude Juncker said — not for the first time — last week. On Friday, Juncker lamented: "Everyone understands English but nobody understands England."

Ever since Britain voted by 52%-48% in 2016 to leave the EU, the other 27 nations in the bloc have presented a united front in negotiations, finally agreeing late last year to a detailed divorce plan with May's government.

Across the English Channel, Brexit has shattered the U.K.'s political map. May's Conservatives and the main opposition Labour Party are both fractured over how to leave the EU. May's carefully crafted Brexit deal with the bloc has been thrown out three times by Parliament, and departure day has been postponed from March 29 until Oct. 31.

The EU has also completed its no-deal preparations, and while many in Brussels hope Britain's Parliament would prevent the country crashing out of the bloc, most are reluctantly resigned to the possibility that it could happen.

Hard-core Brexiteers in the British leadership contest say they would rather take Britain out of the bloc with no deal than countenance a further delay.

Most economists and businesses say a no-deal Brexit would cause economic turmoil, imposing obstacles overnight between the U.K. and the EU, its biggest trading partner. Parliament has repeatedly voted to rule out leaving without a deal, though it's not clear how lawmakers could stop a prime minister who was determined to do it.

It all adds up to a deeply unstable situation for any new prime minister, who could also face a no-confidence vote triggered by Labour in his or her first days in office.

Leadership candidate Dominic Raab has suggested he'd be willing to suspend Parliament — a process known as prorogation — if legislators looked set to delay or stymie Brexit.

Rivals distanced themselves from that idea, which runs counter to Britain's tradition of parliamentary sovereignty.

"I am not into this proroguing Parliament rubbish," said Home Secretary Sajid Javid. "It is just a complete nonsense and anti-democratic and anti-British."