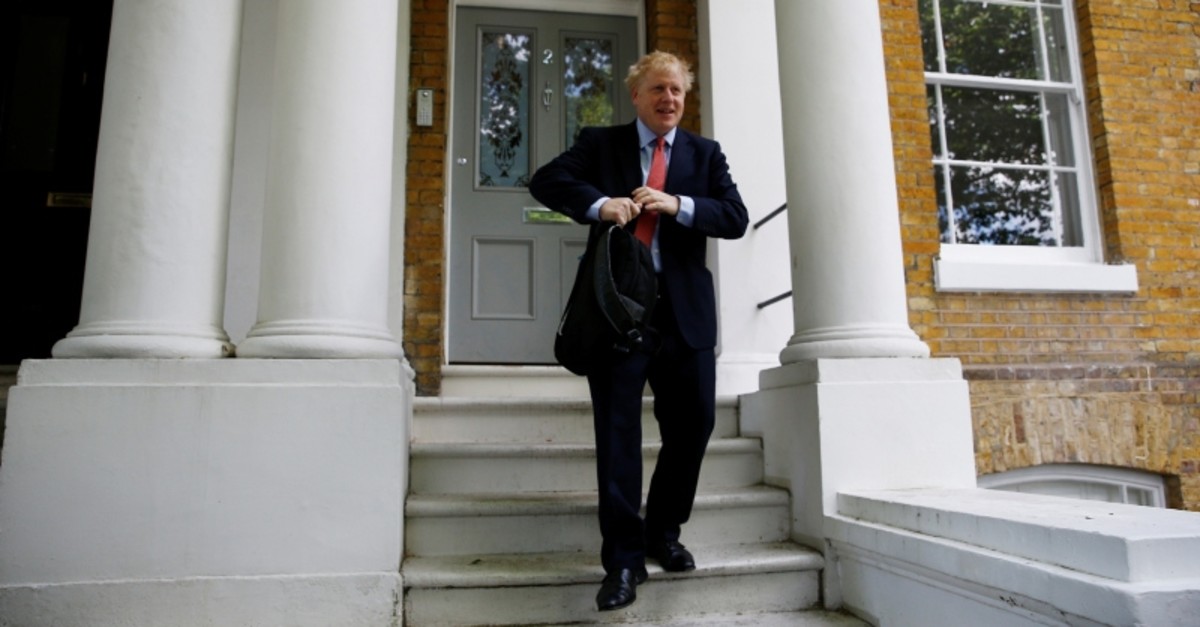 British police were called to the home of Boris Johnson, the favorite to be the next prime minister, after neighbors heard a loud altercation between him and his partner.

The police were called in the early hours of Friday to an address in south London where Johnson is living with his girlfriend, Carrie Symonds. Johnson is currently divorcing his second wife, Marina Wheeler, after 25 years of marriage.

The incident took place hours after Johnson was named in the final two in the race to become prime minister.

"The caller was concerned for the welfare of a female neighbor," London's Metropolitan Police said in a statement issued on Friday evening. "Police attended and spoke to all occupants of the address, who were all safe and well."

"There were no offences or concerns apparent to the officers and there was no cause for police action," the statement said.

The Guardian newspaper, which first reported the story, said an unidentified neighbor had heard a woman screaming followed by "slamming and banging." At one point Symonds could be heard telling Johnson to "get off me" and "get out of my flat."

Despite a series of scandals in the past and criticism about his attention to detail, Brexit supporter Johnson has dominated the race to replace Prime Minister Theresa May.

After a series of ballots to whittle down the race to two candidates, 160,000 Conservative Party members will now chose either Johnson or Foreign Secretary Jeremy Hunt as their next leader - and thus the next prime minister.

A neighbor of Johnson told the Guardian newspaper that they had recorded the altercation from inside their flat out of concern for Symonds.

The Guardian said it had reviewed the recording and that Johnson could be heard refusing to leave the flat and using a swear word to tell Symonds to get off his laptop. Crashing sounds can also be heard, the newspaper said. Reuters has not reviewed the audio.

Symonds is heard saying Johnson had ruined a sofa with red wine, according to the Guardian's account.

"You just don't care for anything because you're spoilt. You have no care for money or anything," Symonds is quoted as saying by the newspaper.

The neighbor told the Guardian: "I (was) hoping that someone would answer the door and say 'We're okay'. I knocked three times and no one came to the door."

Another neighbor interviewed by the BBC confirmed the argument and said she had heard a woman shouting.

Johnson, 55, who served as London mayor for eight years, has cast himself as the only candidate who can deliver Brexit on Oct. 31 while fighting off the electoral threats of Nigel Farage's Brexit Party and Jeremy Corbyn's Labour.

After five rounds of secret voting by lawmakers in the governing Conservative Party, Johnson and Hunt are the two final contenders out of an original field of 13 hopefuls.

Johnson is the runaway favorite to beat Jeremy Hunt, but will face questions over the incident on Saturday when he and Hunt kick off a month-long nationwide tour to win over the grassroots Conservatives, who have the final say.

Whoever takes the Tory party leadership in the week beginning July 22 -- and therefore becomes prime minister -- will then face the looming Brexit deadline of October 31.

The battle is likely to feature pledges from both contenders to take Britain out of the European Union safely and in one piece, succeeding where outgoing Prime Minister Theresa May repeatedly failed.

But the race might ultimately turn into a popularity contest between Johnson -- pugnacious but affable with a tendency for gaffes -- and the more diplomatic, low-key Hunt.

The "row" was splashed across the front pages of most newspapers on Saturday, and while bookmakers were still betting for Johnson, pundits warned the incident could harm his chances.

"Much will depend on the next 24 hours and whether the audio said to have been recorded by a concerned neighbour emerges," said The Times newspaper.

"At the very least it will ensure a leadership race that had started to look like a formality might in fact be something of more consequence."

It is now up to the 160,000 or so paid-up Conservative members who select the center-right party's next leader. According to Times commentator Matthew Parris, the group comprises "classic shire Tories", as well as poorer urban workers who are anti-European and more populist in their views.

The winner will need to succeed where May failed in pushing a deal with the EU through parliament, or face the prospect of leaving without a deal, which MPs have warned could collapse the government and trigger a general election.

With arch-Brexiteer Nigel Farage's new Brexit Party ahead in the polls, Johnson is widely viewed as the one Conservative who could compete in the party's heartlands.

A poll for The Daily Telegraph -- the paper for which Johnson writes a column -- showed six out of 10 Brexit Party backers jumping over to the Conservatives should the man known simply as Boris take charge.

Hunt and Johnson will appear Saturday in Birmingham, central England, for the first of 16 "hustings" -- occasionally rowdy events where candidates field audience questions -- three days before the third anniversary of the Brexit vote.

Hunt launched an early attack on his rival, accusing him of ducking a television debate.

"This is supposed to be his finest hour ... but if you're going to hide away, that's not democracy," he wrote in Saturday's Daily Telegraph.

"Conservative Party members can only make that choice if you have a proper debate and you can't have that debate if one of the candidates is bottling all opportunities."

Both Johnson and Hunt have vowed to extract better terms from Brussels -- or walk away without any strings attached, but European leaders appear unmoved.

"Maybe the process of Brexit will be even more exciting than before because of some personnel decisions in London, but nothing has changed when it comes to our position," European Council President Donald Tusk said.