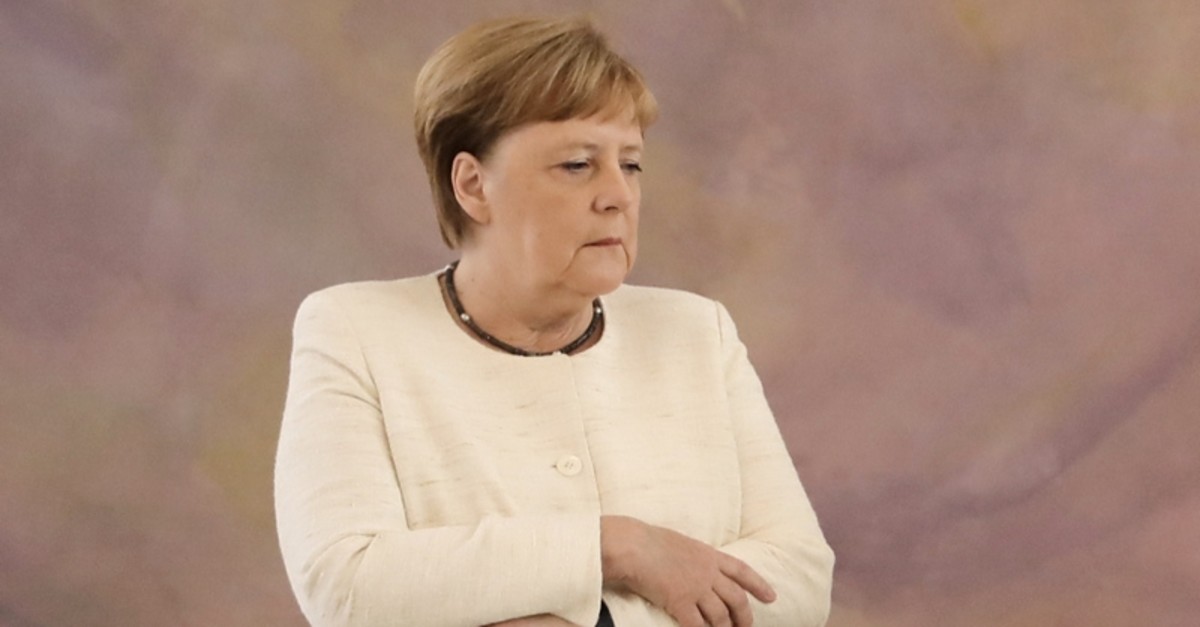 German Chancellor Angela Merkel attends a ceremony where the country's new Justice Minister was given her certificate of appointment by the German President at the presidential Bellevue Palace in Berlin on June 27, 2019. (AFP Photo)
by Compiled from Wire Services Jun 29, 2019 1:36 pm
German Chancellor Angela Merkel says she understands reporters' questions surrounding her health after two incidents this month in which she was seen shaking at public events, but insisted: "I'm fine."

Merkel said Saturday at the end of the Group of 20 summit in Japan that included a long-distance flight and grueling negotiations with other world leaders that "I'm convinced, just as this reaction occurred it will go away again."

The 64-year-old chancellor was asked by journalists if she could explain the shaking and if she had consulted a doctor about it.

She answered that while she could understand the questions she had "nothing particular to report - other that I'm doing well."

On Thursday, just hours before she was due to leave for the summit, Merkel experienced a public bout of severe shaking in Berlin.

The bout occurred at a ceremony at the official residence of President Frank-Walter Steinmeier during the appointment of Justice Minister Christine Lambrecht. Merkel shook for around two minutes, during which she kept folding her arms.

Just over a week earlier, Merkel was seen shaking as she stood alongside the new Ukrainian President Volodymyr Zelensky at an event in Berlin. She said later that she had failed to drink enough during the hot weather at the time. Merkel said afterward that she was fine after drinking three glasses of water, which she "apparently needed."

Two German newspapers, the Stuttgarter Zeitung and the Stuttgarter Nachrichten, on Friday cited government sources describing the second bout of shaking was "psychological".

"The memory of the incident in the previous week led to the situation today, that is to say it was a psychologically occurring process," they reported.