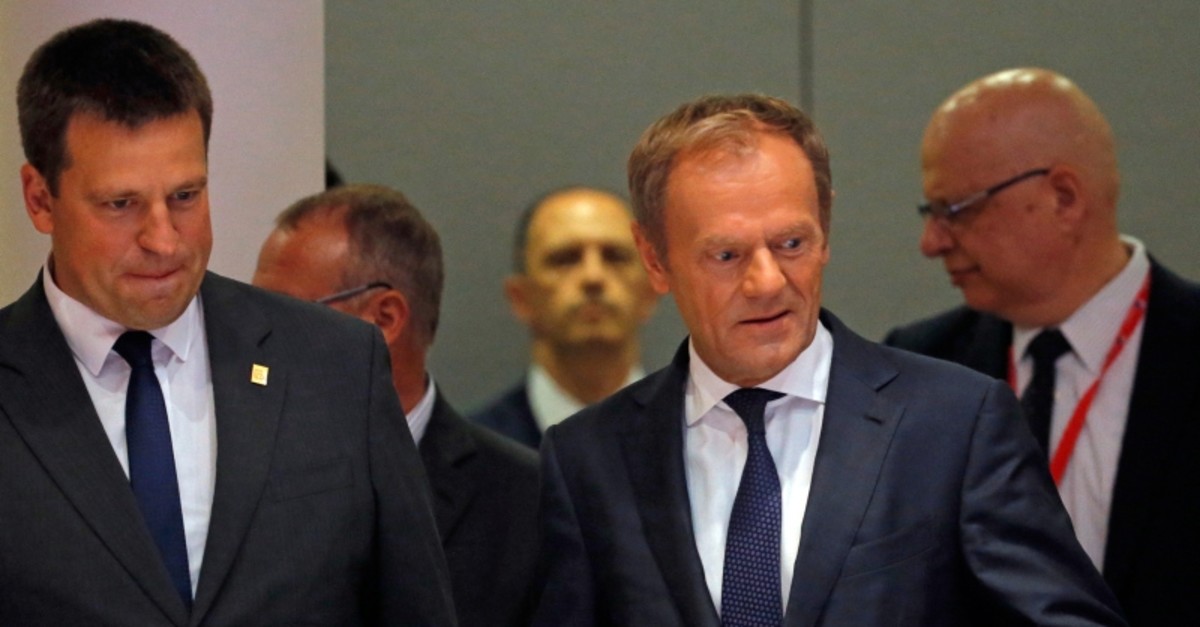 A special summit of EU leaders has been delayed, a spokesman for European Council President Donald Tusk says.

The summit, which had been scheduled to start at 1600 GMT, had already been delayed twice and still had not started when the spokesman tweeted shortly before 1900 GMT that pre-summit "consultations continue."

Tusk is meeting separately with EU leaders, who are deeply divided over how to distribute the EU's top jobs, including the presidency of the European Commission.

The summit "will start once consultations completed," he wrote.

France's President Emmanuel Macron and Germany's Chancellor Angela Merkel came to Brussels after coming to agreement on the sidelines of the G-20 summit in Osaka, Japan.

Under the so-called "Sushi deal", the 28 EU leaders would nominate Dutch social democrat Frans Timmermans as president of the European Commission, rather than his conservative rival German MEP Manfred Weber.

But, when Merkel put this to fellow center-right leaders in the EPP group immediately before the emergency summit, several rebelled, and the start of the talks was delayed as heads of government shuttled between side meetings.

After the leaders from the EPP group met, Croatian Prime Minister Andrej Plenkovic warned: "There is no support for what circulated in media today."

Irish premier Leo Varadkar was also pessimistic: "I think it's fair to say there's a lot of opposition to the proposal that was made in Osaka.

"From the EPP point of view, the vast majority of EPP prime ministers don't believe that we should give up the presidency of the Commission quite so easily without a fight," he said.

For a nominee to go forward, he or she must secure the backing of 21 of the 28 EU leaders, representing 65 percent of the bloc's population.

Timmermans, the outgoing vice-president of the Commission, spearheaded EU efforts to impose its vision of the rule of law on authoritarian-leaning eastern members and is already firmly opposed by Hungary and Poland.

The opposition to the Japan compromise would seem to kill off his chances.

"The EPP has announced that it doesn't accept the Osaka deal. The accord is dead, there'll be no agreement tonight," a senior party source told AFP, as EU officials announced that the start of the summit had been delayed.

But if Timmermann's momentum was derailed, Weber still faces opposition from the left and center, and Macron arrived at the summit in an upbeat mood, determined to push on with efforts to agree a top jobs package.

The European Parliament will then vote for its own speaker this week, and a new director for the European Central Bank will be chosen later.

"The way things are presented, they will not be very simple consultations, to put it mildly," Merkel, the bloc's most influential leader, said as she arrived.

Macron, however, told reporters he expected a "constructive accord".

"I'm not pushing this candidate or that one," he said. "You've never heard me say that I'm stuck on this or that candidate."

Macron admitted he had been "hostile" to some candidates, implying Weber.

He stressed that the four candidates nominated by the leaders must include two women and someone from eastern Europe.

But, as vice-president of the Commission for the past five years, Timmermans has made enemies in the east of the Union.

Hungarian Prime Minister Viktor Orban, in a letter to EPP leader Joseph Daul, said Timmermans would be a "serious or even historical mistake."

Britain's Prime Minister Theresa May is attending her last EU summit. A spokesman said she would play a "constructive role" and would not abstain from any vote.

The EPP came out on top in last month European parliamentary elections, though with a historically low share of the vote and Weber as its lead candidate.