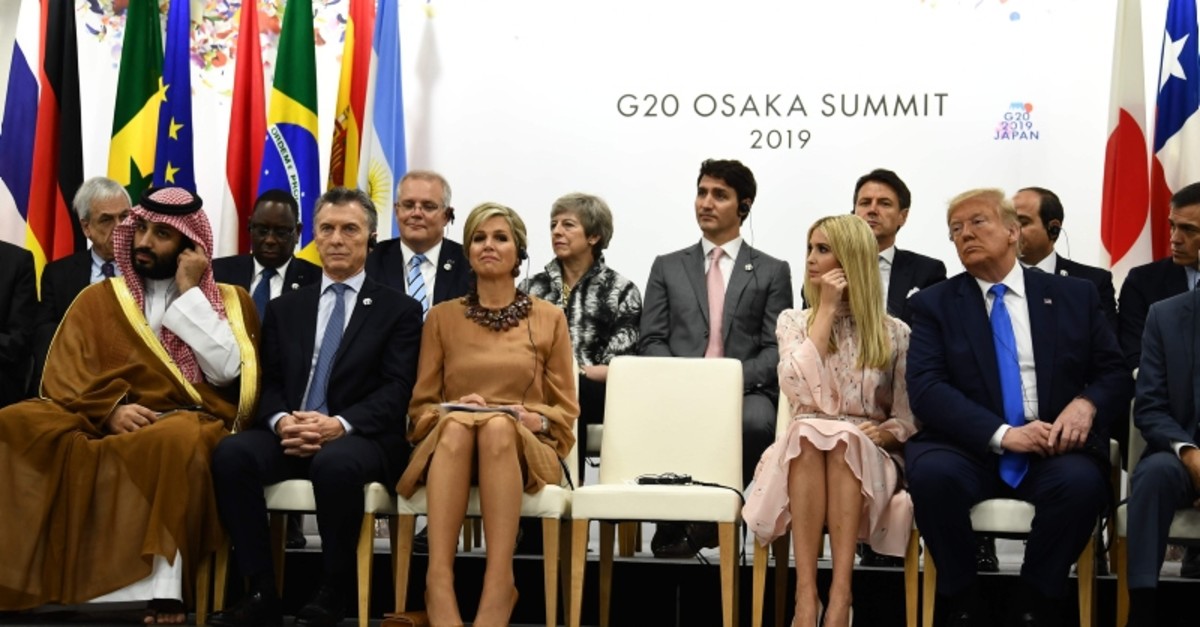 A United Nations official on Saturday joined Dutch lawmakers in criticizing Queen Maxima over a meeting she held with Saudi Crown Prince Mohammed bin Salman on the sidelines of the G-20 summit in Osaka this week.

U.N. rapporteur on extrajudicial executions Agnes Callamard told newspaper Algemeen Dagblad it was "more than disappointing" that the Dutch queen had apparently not raised the murder of journalist Jamal Khashoggi with the Saudi prince.

"It's one thing (for her) to meet this man, it's something else to remain silent," Callamard was quoting as saying.

"Your Royal Highness, when you gave MBS the honor of your meeting, I trust you raised the extrajudicial killing of Mr Khashoggi, the botched investigation, no focus on the chain of command, the closed trial. I trust you asked for #justiceforJamal," tweeted Agnes Callamard on Saturday.

Callamard, the U.N. special rapporteur on extrajudicial killings, issued a report last week that implicated the crown prince in Khashoggi's killing and called on the international community to launch a formal investigation.

Khashoggi, a Washington Post columnist and critic of the crown prince, was allegedly murdered and dismembered by Saudi operatives in the Saudi consulate in Istanbul in October 2018. His remains have never been found.

Queen Maxima met with the crown prince during a meeting of G20 nations in Osaka, Japan. Dutch media reported their talks focused on microfinance and helping women set up businesses, but that Khashoggi was not brought up.

"That is more than disappointing," Callamard told the Dutch daily Algemeen Dagblad in an interview.

"It is one thing to meet this man. It is something else to remain silent. At this point, silence equals complicity," she was quoted as saying.

"If you do not speak and do not demand justice, it suggests that you have no worries," she said.

The Dutch Royal House could not immediately be reached for comment, but local media cited a statement from the royals as confirming that the meeting had taken place. It added that it had been obligatory for the queen to meet the crown prince because Saudi Arabia will host the next G-20.

Maxima, an Argentine who married the Dutch crown prince in 2002, had addressed the G-20 in Japan about women's empowerment.

The Saudi Center for International Communication published a photo of the meeting on Twitter, saying "many topics were on the table" during their conversation.

Callamard's comments followed rare criticism of the royals by Dutch lawmakers, several of whom said they would table the matter for discussion in parliament on Monday.

"Whoever approved this conversation between Maxima and the Saudi crown prince understands nothing of diplomacy and even less about what's good public relations," Sjoerd Sjoerdsma of the centrist D-66 Party, a member of the governing coalition, said in a statement on Twitter.

"There is no doubt in my mind that he ordered the killing of Mr. Khashoggi, that he knew about it, that he's done things like that to other people and that he's been a disruptive force throughout the region," Graham told CBS News, adding that he has led the effort to sanction the prince.

Graham acknowledged the role of Saudi Arabia as a strategic ally, but said he chose "not to turn my back on an ally who chops a man up in a consulate, violating every international norm."

Graham said he is in a "completely different place" than Trump on the prince, adding that the Congress will not "accept business as usual with Saudi Arabia as long as MBS is around."

In his closing speech at the G20 summit in Osaka, Japan on Saturday, Trump called Khashoggi's killing "horrible" but did not point fingers at the prince. Trump has previously cited business deals with the Saudis of billions of dollars as justification for not pressing them on the Khashoggi issue.

Asked by reporters if he is worried about offending the prince, Trump said he does not.

"If you look into Saudi Arabia and you see what's happening, 13 people or so have been prosecuted. Others are being prosecuted. They've taken it very, very seriously, and they will continue to," Trump said about the Saudi judicial process, which international observers have criticized as a whitewash.

"And I've let everybody know I'm very unhappy about that whole event," Trump added. "I get along with Mohammed from Saudi Arabia. Look, I spoke to Saudi Arabia when the oil prices, a year ago, were getting very high. And I wasn't so nice. And I said, 'You got to get some more oil into the system because what's happening is no good. And they did."

"Nobody, so far, has directly pointed a finger at the future king of Saudi Arabia," Trump claimed, just weeks after a damning U.N. forensic report said the prince should be investigated over the murder as there is "credible evidence" that he and other senior officials are liable.

"It is the conclusion of the special rapporteur that Mr. Khashoggi has been the victim of a deliberate, premeditated execution, an extrajudicial killing for which the state of Saudi Arabia is responsible under international human rights law," ​Callamard wrote in the report.

One of the key findings of the report concluded, "There is credible evidence, warranting further investigation, of high-level Saudi officials' individual liability, including the crown prince's."

Hatice Cengiz, the fiancee of the slain journalist, on Sunday pointed to the Saudi crown prince's silence on the Callamard's report.

Not knowing the whereabouts of Khashoggi's body has been devastating for Cengiz as it makes her think that Khashoggi might still be alive.

"This is an emotional trauma," she said.