Mitsotakis sworn in as PM after major electoral victory 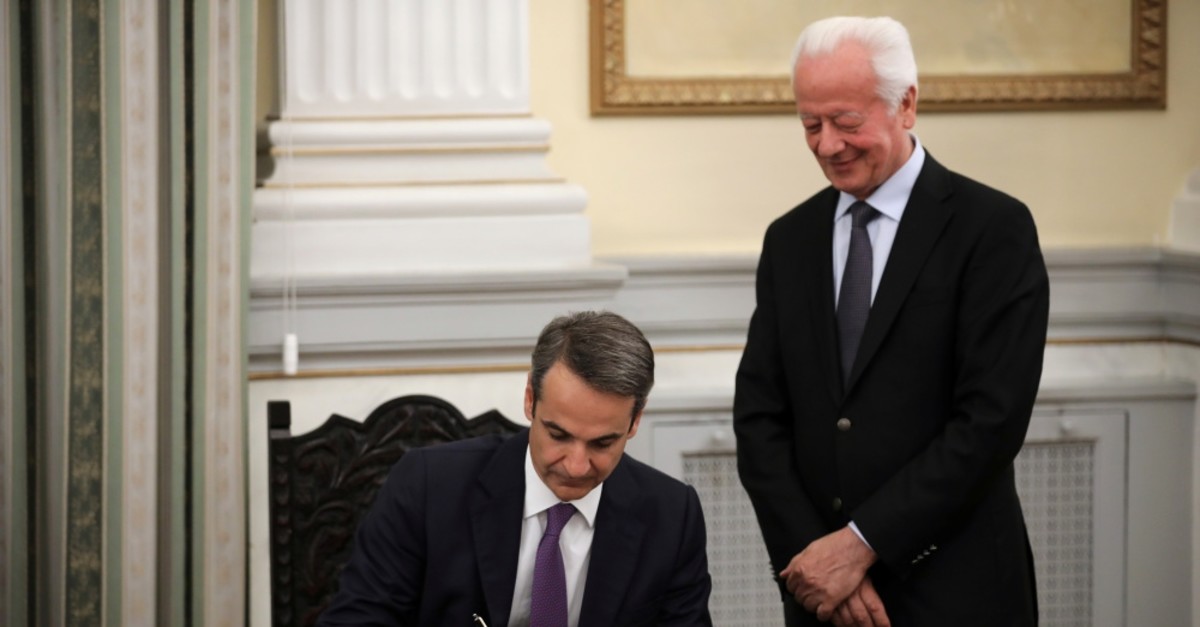 Greece's new Prime Minister Kyriakos Mitsotakis, the scion of a powerful political family, won a clear victory with his New Democracy party being able to form the new government by itself

Kyriakos Mitsotakis, leader of the center-right New Democracy (ND) party, was sworn in on Monday as prime minister of Greece after having won over 39.85 percent of the vote and 158 out of a possible 300 seats on the July 7th national parliamentary election, in which all seats were contested. Shortly after his swearing-in ceremony at Maximus Megaron, Mitsotakis was greeted by outgoing Prime Minister Alexis Tsipras of the leftist Syriza party, which got 31.53 percent of the vote and 86 seats. Other than the clear victory of the ND and its ability to create a government by itself, without the burden of chaotic coalitions that Tsipras had had to suffer through, the big celebration that united most parties and the press on Sunday was the exit of the neo-Nazi Golden Dawn (GD) party from parliament.

The neo-Nazi party did not manage to gather enough votes across the nation and failed to reach the 3 percent threshold required to hold seats in the Vouli. Some prominent GD members are currently being prosecuted while the organization itself has been officially declared as criminal in nature. GD's quick exit from parliament has been dubbed a "Victory of Democracy" by many in the nation.

No other parties managed to get more than a two-digit percentage of votes. The center-left Movement of Change party (former Pan-Hellenic Socialist Movement or PASOK) managed to get 8.10 percent and 22 seats. The Communist Party of Greece (KKE) also lost strength and fell down to 5.30 points and 15 seats.

A new party, Hellenic Solution (EL), with curious policies and rhetoric resembling that of GD did manage to get into parliament with 3.70 percent and 10 seats. Its leader, Kyriakos Velopoulos, had made a name for himself by selling "manuscripts written by Jesus Christ himself" as well as "anti-balding creams" on peripheral television stations.

The last party that also managed to barely win any seats, specifically 9, was the Mera25 (Day 25) party, led by former SYRIZA's finance minister Yanis Varoufakis, and was widely accused by the people of almost "blowing up the euro" during his tenure. He was relieved of duty by Tsipras six months after his appointment.

Tsipras had already admitted defeat at the Zappeion on Sunday night and promised to respect the election's result and put up a proper but formidable opposition to ND.

SYRIZA first came into power in 2015, during the height of the financial crisis and a time when an exit from the European Union and the Eurozone seemed to be more likely than not. Having taken advantage of the situation, and with great popular support, Tsipras swept into power but ultimately failed to implement his highly Eurosceptic agenda.

Mitsotakis, who celebrated his family's name in politics, has made clear that first aims as prime minister are to alleviate overtaxing burdens on businesses and the middle class in Greece, create foreign investment opportunities, further reduce unemployment and give heed to calls for public order.

His father and former Prime Minister Konstantinos Mitsotakis, who passed away in 2017, and was in power from 1989 to 1992 had good relations with the then Turkish Prime Ministers Süleyman Demirel and Turgut Özal. After the 1967 Greek military Junta coup, he fled to Turkey and later France.

Compared to Tsipras, the new Prime Minister Mitsotakis is seen by the people as more serious, better educated and more conservative, as well as a lover of the ideals of the EU.

Mitsotakis studied political science and international relations at Stanford and Harvard, while in 2003 he received the "Global Leader of Tomorrow" title by the World Economic Forum (WEF). In addition to Greek, he speaks English, French and German; his wife, Mareva Grabowski, is of Polish descent and they have three children together. In the 2013-2015 ND-PASOK coalition he held the post of minister of public administration, his sister Dora Bakogianni has held the post of foreign minister and his nephew, Kostas Bakogiannis has been elected as Athens mayor.