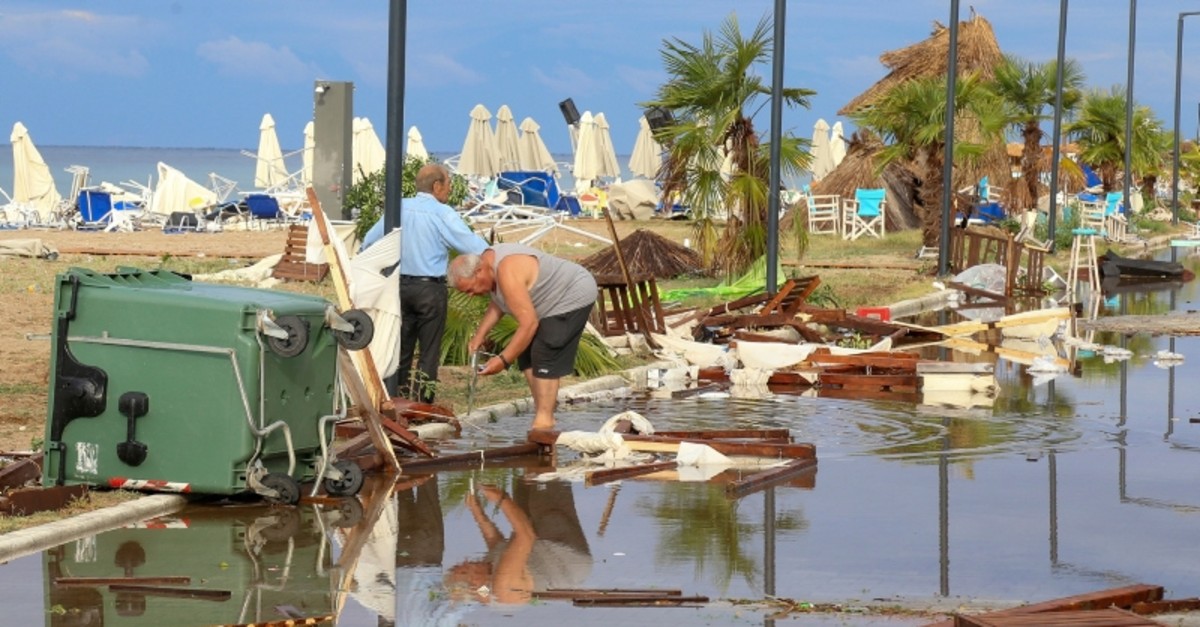 A state of emergency has been declared in an area of northern Greece after a violent storm tore through seaside resorts, killing six tourists.

A fisherman, who had been missing, was also found dead Thursday taking the death toll to seven.

Emergency services officials said Thursday that around 65 people had been injured, of whom 35 were hospitalized after the storm hit the northern Halkidiki region late Wednesday, toppling trees and power pylons, cutting power and blocking roads.

Authorities said 22 people remain hospitalized, including a woman in critical condition, and more than 100 others received medical attention. Six of the dead were tourists: two each from Russia, the Czech Republic and Romania.

An 8-year-old boy from Romania and a woman were killed in a roof collapse, while two Russians, a young boy and a man, died after a tree collapsed onto their hotel.

A state of emergency was declared in the region, a three-finger peninsula near the northern city of Thessaloniki popular with tourists in the summer.

The freak storm only lasted about 20 minutes, according to witnesses, but it was enough to overturn cars, uproot trees and balcony railings and cause mudslides. The storms came after temperatures in Greece soared to 37 degrees Celsius (98 degrees Fahrenheit) over the past two days. The Greek national observatory said it had recorded over 5,000 lightning bolts around the country on Wednesday evening.

The storm occurred nearly a year after a wildfire near Athens killed at least 100 people during a heatwave, and prompted concern over more frequent damaging weather events.

"From now on, these phenomena will occur with increasing frequency, especially in the Mediterranean area which is sensitive to climate change," Efthymis Lekkas, a professor at Athens University's Department of Geology and Geo-environment, who heads a public agency for earthquake and disaster planning, told state-run TV.

"We must definitely adapt our civil protection plans and incorporate updated scientific knowledge and know-how to deal with these phenomena."

The environmental group Greenpeace called in the government to abandon plans to expand offshore natural gas exploitation and invest in renewable alternatives.

"We know that increased temperatures produce more catastrophic weather events," said Nikos Charalambides, head of Greenpeace in Greece. "We only have a few years left to address our lack of response to climate change."

The storm in Halkidiki was the first major event to be addressed by the country's new conservative government following a general election Sunday. The army was ordered to help civilian agencies restore power and running water to damaged areas and end road closures and disruptions to rail services.

The Culture Ministry said monasteries at the nearby Orthodox Christian monastic sanctuary of Mount Athos — the easternmost section of the three-finger Halkidiki peninsula — did not suffer any serious damage.