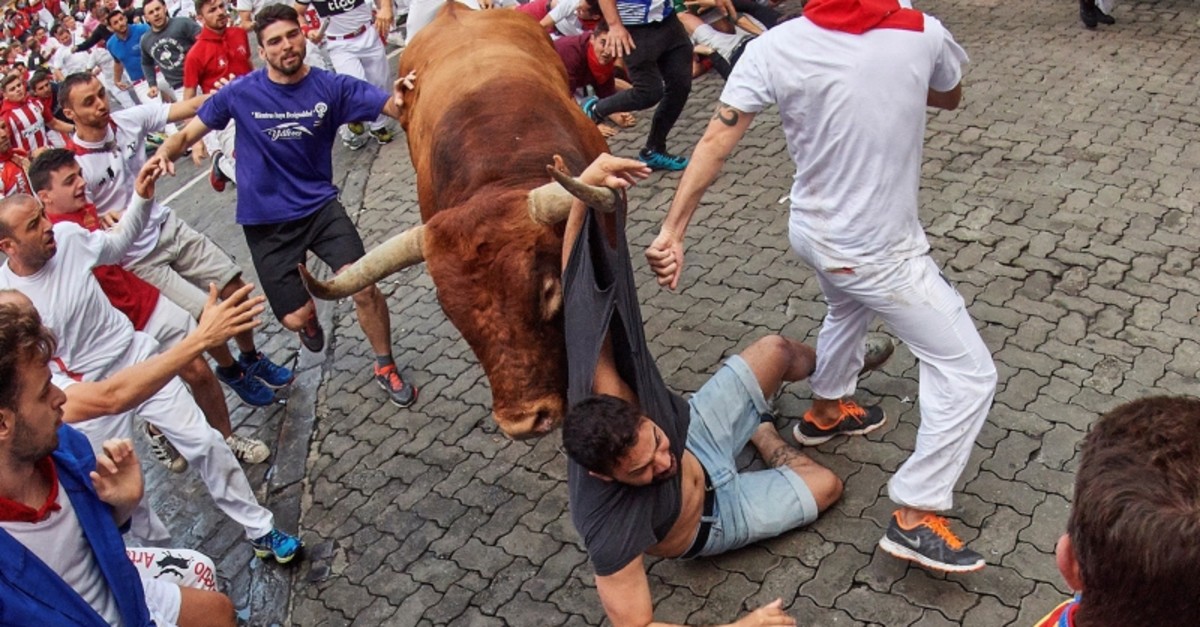 Thousands of revellers raised candles and red scarves in the air and swayed back and forth as they sang a mournful song to mark the end on Sunday of Spain's most famous bull running festival in Pamplona which saw eight daredevils gored this year.

"Poor me, poor me, the San Fermin fiesta has come to an end," the crowd sang just after the stroke of midnight in front of city hall in the Plaza Consistorial as fireworks lit up the sky above.

"People of Pamplona, the San Fermin festival is over, the best festival in the world," Pamplona mayor Enrique Maya said from the balcony of city hall to cheers from the crowd just before the singing began.

But the highlight is a bracing, daily test of courage against a thundering pack of half-tonne, sharp-horned bulls.

Each morning hundreds of runners, many dressed in white with red scarves and sashes, test their valour by sprinting with six half-tonne bulls along an 850-metre (2,800-foot) course through the narrow streets of the city in northern Spain.

The most daring try to run as long as they can right in front of the beasts' horns before veering off to the side or diving under the wooden barriers that separate the bulls and runners from the thousands of spectators from around the world that line the route.

Two Australians aged 27 and 30, as well as a 25-year-old Spaniard, were gored during the final bull run of the festival on Sunday by a half-tonne fighting bull which became separated from the pack moments into the run and began charging people in its way, regional health authorities said.

The three men suffered injuries to the armpit, arm and leg from the bull's horns.

Isolated bulls are more likely to get disoriented and start charging at people.

That brought to eight the total number of daredevils who were gored by a bull during this year's fiesta.

At the end of the festival's first run, a bull ran over and sunk one of its horns deep in the neck of a 46-year-old lawyer from San Francisco, Jaime Alvarez, narrowly missing key arteries.

He was injured as he was trying to take a video-selfie with his mobile phone.

"It was like a truck or car just hitting me in the side of the head. I put my hand on my neck and I saw blood," he told US television from a Pamplona hospital.

He was released from hospital two days later.

Another 23-year-old American from Kentucky and a 40-year-old Spaniard were also gored that day.

In addition to the eight men who were gored, another 27 people were taken to hospital for broken bones and bruises suffered during the bull runs.

About 500 more people were treated at the scene for more minor injuries, according to the Red Cross.

Sixteen people have been killed in the bull runs since records started in 1911.

The last death was in 2009 when a bull gored a 27-year-old Spaniard in the neck, heart and lungs.

The bulls face almost certain death in afternoon bullfights, and earlier this month animal rights activists staged a "die-in" demonstration in the streets of the city to protest the tradition.