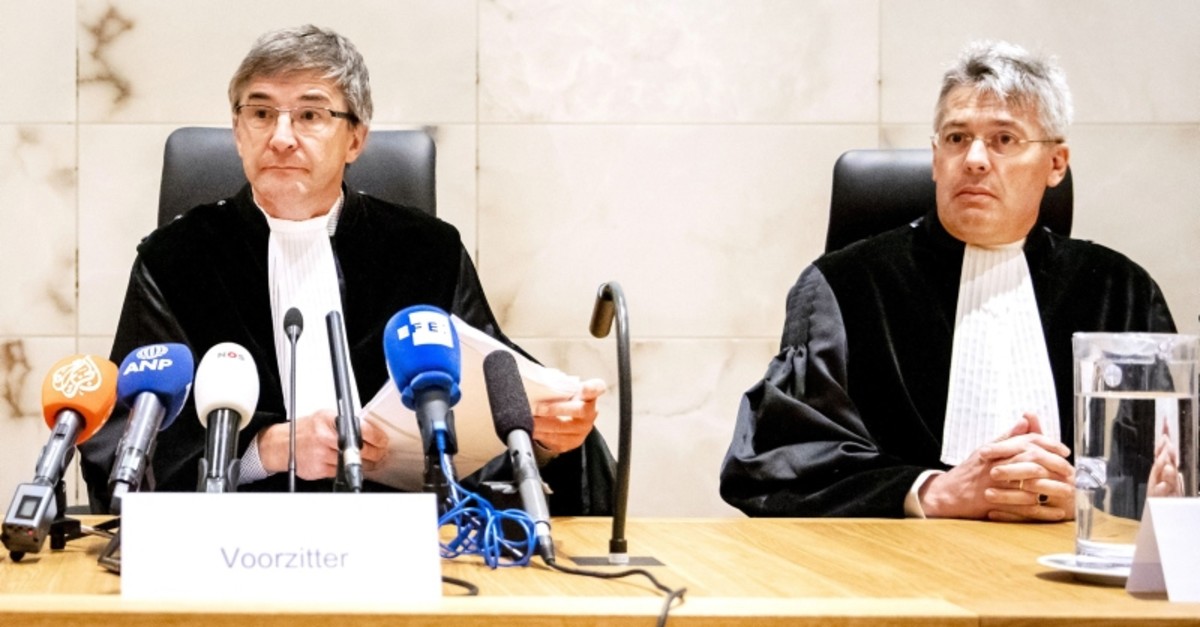 President C.A. Streefkerk (L) looks on before the Supreme Court ruling in the cassation proceedings of ,the Mothers of Srebrenica, (group of victims' relatives) case against the Dutch State at the Dutch supreme court on July 19, 2019. (AFP Photo)
by Daily Sabah with Agencies Jul 19, 2019 2:35 pm

The Supreme Court of the Netherlands on Friday cut the state's liability for the 1995 Srebrenica genocide, saying the Dutch U.N. peacekeepers had only a 10 percent chance of preventing the deaths of some 350 Muslim men.

The court set the liability of the Dutch state at 10 percent of the overall loss suffered, reducing it from 30 percent, meaning that the survivors are likely to receive only a few thousand euros. The lower court had said in 2017 that the Dutch actions meant the Muslims were "denied a 30 percent chance of avoiding abuse and execution," and thus the Dutch state was liable for 30 percent of damages owed to families.

"The Dutch state bears very limited liability in the 'Mothers of Srebrenica' case," the court said.

"That liability is limited to 10 percent of the damages suffered by the surviving relatives of approximately 350 victims." According to the ruling, relatives of the slain men are eligible to claim 10 percent of their financial damages from the Dutch government because the court estimated that the men would have had a 10 percent chance of survival if the Dutch troops had allowed them to remain inside their compound.

The ruling was the latest in a long-running legal battle by a group of relatives known as the Mothers of Srebrenica to hold the Dutch government liable for the deaths of their family members in Europe's worst massacre since World War II. The case revolves around the role played by the outnumbered, outgunned Dutch U.N. peacekeepers stationed in the Srebrenica enclave in eastern Bosnia-Herzegovina as Bosnian Serb forces led by Gen. Ratko Mladic overran the area and subsequently massacred some 8,000 Muslim men and boys in the summer of 1995. It focuses on more than 300 men who were among thousands of terrified Muslims who took refuge in the Dutch battalion's base near Srebrenica but were expelled by the peacekeepers and subsequently murdered by Bosnian Serbs. The Dutch forces improvised a funnel of vehicles and troops through which the Muslims left the base. As they did, Ratko Mladic's forces picked out the men, took them away and later killed them.

Srebrenica has cast a long shadow over the Netherlands, forcing the government to resign in 2002 after a scathing report over the role of politicians in the failure of the peacekeepers.

On July 11, 1995, Bosnian Serb militia forces under the command of Mladic entered Potocari, which was under the protection of Dutch soldiers who were part of the United Nations Protection Force in Bosnia-Herzegovina. The army of Bosnian Serbs held all U.N. soldiers captive and captured Srebrenica. That night, all the refugee women and children taking shelter in the U.N. camp in Potocari were forced to get on buses and trucks and leave the city. In front of the eyes of the entire world, the Serbian soldiers held more than 1,500 Muslim men captive for 10 days and tortured, raped and killed them, regardless of their age. During this genocide attempt, world powers confined themselves to watching these scenes of horror. After the Bosnians were butchered and subjected to unprecedented brutality, the international powers decided to intervene in the ongoing war and stop the Serbian forces.

Hundreds of Bosniak families are still searching for missing people as a large number of victims were thrown into mass graves around the country during the 1992-1995 Bosnian War. Since the war's end, 8,400 people remain missing according to the Institute for Missing Persons in Bosnia-Herzegovina. Every year, the remains of more victims are identified and buried in Potocari on the anniversary of the genocide.