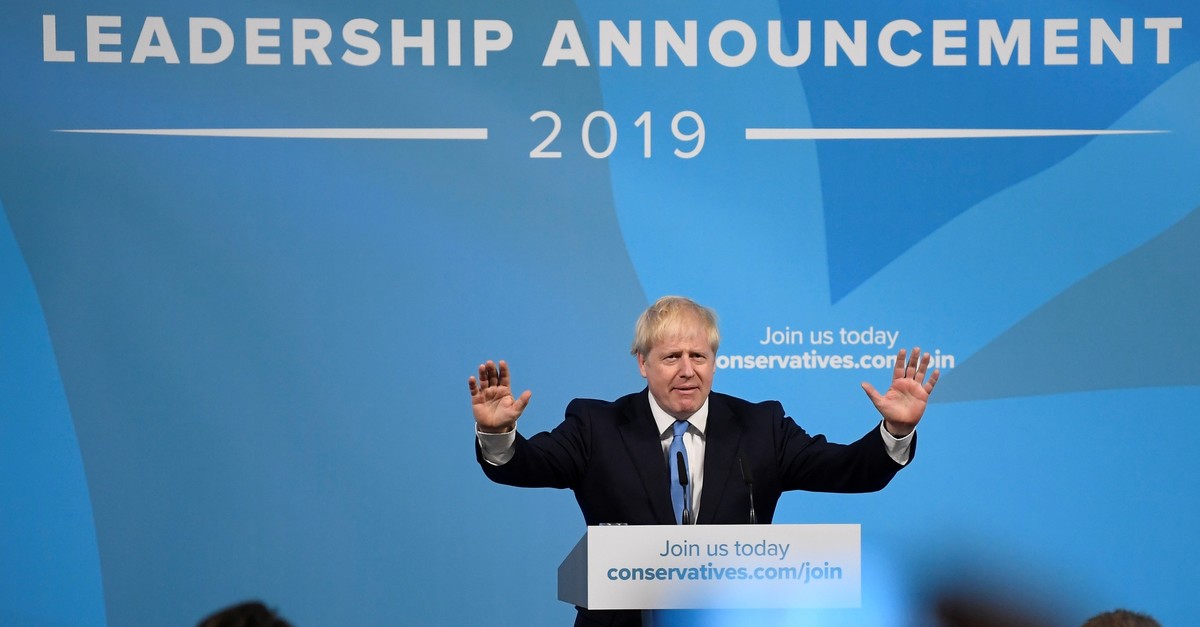 Boris Johnson speaks after being announced as Britain's next Prime Minister at The Queen Elizabeth II centre in London, Britain July 23, 2019. (Reuters Photo)
by Compiled from Wire Services Jul 23, 2019 2:05 pm

Brexit hard-liner Boris Johnson, one of Britain’s most famous and divisive politicians, has won the race to lead the governing Conservative Party and become the next prime minister

Brexit hard-liner Boris Johnson won the contest to lead Britain's governing Conservative Party on Tuesday and will become the country's next prime minister, tasked with fulfilling his promise to lead the U.K. out of the European Union — one of the greatest political challenges faced by any British prime minister since World War II.

Johnson resoundingly defeated rival Jeremy Hunt with 92,153 votes Hunt's 46,656, winning two-thirds of the votes in a ballot of about 160,000 Conservative members.

He will be installed as prime minister in a formal handover from Theresa May on Wednesday.

In a brief speech Tuesday meant to rally the party faithful, Johnson radiated optimism and pledged to deliver Brexit, unite the country and defeat the Labour opposition.

"Like some slumbering giant we are going to rise and ping off the guy-ropes of self-doubt and negativity with better education, better infrastructure, more police, fantastic full-fiber broadband sprouting in every household. We are going to unite this amazing country and we are going to take it forward," he added.

Johnson, a former London mayor, has wooed Conservatives by promising to succeed where May failed and lead the U.K. out of the European Union on the scheduled date of Oct. 31 — with or without a divorce deal.

Several Conservative ministers have already announced they will resign to fight any push for a "no-deal" Brexit, an outcome economists warn would disrupt trade and plunge the U.K. into recession. Fears that Britain is inching closer to a "no-deal" Brexit weighed on the pound once again Tuesday. The currency was down another 0.3% at $1.2441 and near two-year lows.

May stepped down after Britain's Parliament repeatedly rejected the withdrawal agreement she struck with the 28-nation bloc. Johnson insists he can get the EU to renegotiate — something the bloc insists it will not do.

If not, he says Britain must leave the EU on Halloween, "come what may."

Johnson will preside over a House of Commons in which most members oppose leaving the EU without a deal, and where the Conservative Party lacks an overall majority.

With Parliament seemingly opposed to a "no-deal" option, many Brexiteers have promoted the idea that Johnson suspend Parliament to allow Brexit to happen. The implications of such a move would be unpredictable. It could lead to civil unrest and a surge in Scottish nationalism, in addition to the instant economic impact. Johnson has said he doesn't want to go down that path but hasn't ruled it out.

The rise of Alexander Boris de Pfeffel Johnson, often referred to as "BoJo," to the top of British politics is the grandest twist so far in a career that has taken him from journalism via TV-show fame, comedy and scandal into the political brinkmanship of Britain's Brexit crisis.

In 2016, Johnson became one of the most recognizable faces of the Brexit campaign, which won the referendum by 52 percent to 48 percent, but faced accusations of making misleading claims to win support, most notably by stating that Britain would be 350 million pounds ($440 million) a week better off outside the EU. Last year, he resigned as foreign secretary amid disagreements with Prime Minister Theresa May over her Brexit plans on future relations with the EU.

Johnson also has Turkish roots: His great-grandfather Ali Kemal was an Ottoman journalist and politician, and regarded as a controversial figure in Turkey. During a trip to Switzerland, Kemal met an Anglo-Swiss girl, Winifred Brun, the daughter of Frank Brun by his marriage to Margaret Johnson, and the two were married in Paddington, London in 1903. A staunch liberal, Kemal was opposed to Sultan Abdulhamid II's autocratic rule and spent many years in exile until the proclamation of the Second Constitutional Era in 1908. From that point on, Kemal was an ardent opponent of the hawkish Committee of Union and Progress (CUP), the leading revolutionary group. As the CUP consolidated its power by defeating the counter-coup on March 31, 1909, Kemal fled to Europe and spent three years in exile, during which Johnson's grandfather Osman Wilfred Kemal was born while Winifred died shortly after.

Kemal returned to Istanbul in 1912 and remained in opposition to the CUP, which remained in power until October 1918. In 1919, as Istanbul and various parts of the empire were under occupation by Allied Powers, he served for three months as interior minister in the government of Damat Ferit Pasha, a disliked figure for close cooperation with occupation powers and nationalists led by Mustafa Kemal in Ankara. Kemal was a leading opponent of the 1919-1922 Turkish War of Independence in the Ottoman press. On Nov 4, 1922, he was kidnapped by nationalists in Istanbul to be brought to Ankara to stand trial for treason charges, but the group was intercepted by First Army Commander Gen. Nureddin Pasha in Izmit two days later. Branded a top traitor in Anatolia, Kemal was lynched to death by a mob set up by Nureddin.

After Kemal's return in 1912, Osman Wilfred Kemal and her sister Selma remained in England and adopted their maternal grandmother's maiden name of Johnson, although Selma later returned to Turkey. Osman later went by the name Wilfred Johnson and married Irene Williams, who gave birth to Stanley, the father of Boris.

Turkish President Recep Tayyip Erdoğan extended his congratulations to Boris Johnson on his election as leader of Britain's ruling Conservative Party. "I believe the Turkey-United Kingdom relationship will further improve under [his] new term," President Erdoğan tweeted, referring to Johnson as the "77th Prime Minister of the United Kingdom."

U.S. President Donald Trump also heralded the selection of Johnson in a possible sign of warmer relations between the two allies after tense ties with outgoing British Prime Minister Theresa May. "Congratulations to Boris Johnson on becoming the new Prime Minister of the United Kingdom. He will be great!" Trump said in a post on Twitter. The U.S. president has repeatedly praised Johnson, the flamboyant former London mayor and pro-Brexit champion who has been compared to the Republican U.S. president. Like Trump, Johnson has led a "U.K. first" campaign and will now lead a heavily divided nation.

Johnson to manage tensions with Iran

Beside his "do or die" pledge to deliver Brexit in just over three months' time, his domestic battles might have to take a backseat during his first days in office as he manages tensions with Iran. Iranian Foreign Minister Mohammad Javad Zarif tweeted his congratulations to Johnson, saying: "Iran does not seek confrontation." "But we have 1,500 miles of Persian Gulf coastline. These are our waters & we will protect them." The seizure of the Stena Impero ship has been seen as a tit-for-tat move after British authorities detained an Iranian tanker on July 4 in the Mediterranean on suspicion it was shipping oil to Syria in breach of EU sanctions. Iran's top diplomat warned Britain against "implementing the ploys of the B team," in a video message posted along with his tweet. Zarif uses the term "B team" to refer to U.S. national security adviser John Bolton, Israeli Prime Minister Benjamin Netanyahu, and Saudi and Abu Dhabi crown princes Mohammed bin Salman and Mohammed bin Zayed, who are all pushing a hard line on Iran. "The B Team is losing ground in the United States and now turning their attention to the United Kingdom," he tweeted.