8 injured in blast at Russian ammunition dump in Siberia 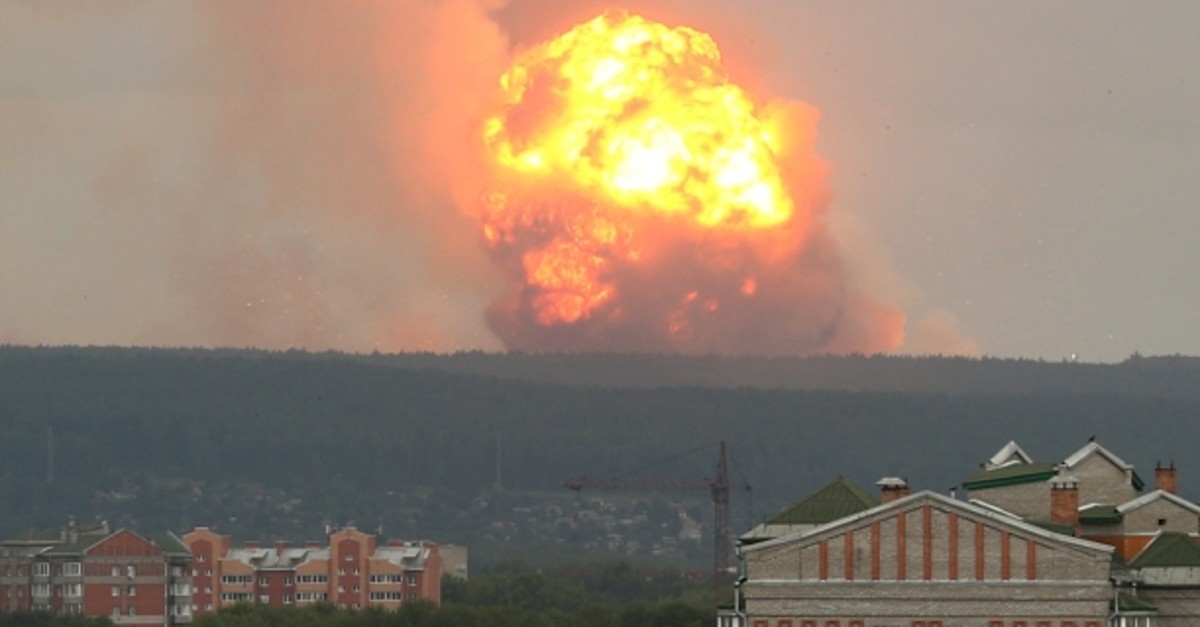 A view shows flame and smoke rising from the site of blasts at an ammunition depot near the town of Achinsk in Krasnoyarsk region, Russia August 5, 2019. (REUTERS Photo)
by Compiled from Wire Services Aug 05, 2019 3:44 pm

A series of blasts rocked an arms depot at a Russian military base in Siberia on Monday, injuring eight people and prompting aluminum producer Rusal to suspend operations at the country's biggest alumina producing plant.

11,000 Russians were being evacuated from neighborhoods in Krasnoyarsk region's city of Achinsk following blasts and a fire at a military storage facility, TASS news agency cited local authorities as saying.

Photographs showed a huge explosion on the horizon with flames leaping into the sky followed by belching black smoke.

Eight people were injured in the incident, TASS news agency cited doctors as saying. A Russian soldier was killed, TASS cited a source as saying. A source from another agency, RIA, at the defense ministry denied the information about the soldier's death.

Rusal, the world's largest aluminum producer outside China, suspended operations at its Achinsk alumina plant and evacuated all but essential staff to ensure their safety, it said.

The plant is Russia's largest producer of alumina, a raw material which is smelted into aluminum.

Loading is operating on schedule at Russian oil giant Rosneft's Achinsk oil refinery, TASS quoted a refinery spokesperson as saying. The refinery is located 30km from the military base.

Local authorities say residents don't face an immediate threat but asked people to stay away from the military base.

The state-run TASS news agency quoted an anonymous source saying the depot held up to 40,000 artillery shells for tank guns.

Ammunition depot explosions are not unusual in Russia. After the most recent incident in May 2019, a fire raged for almost a week before water drops from military aircraft and helicopters helped put out the blaze.