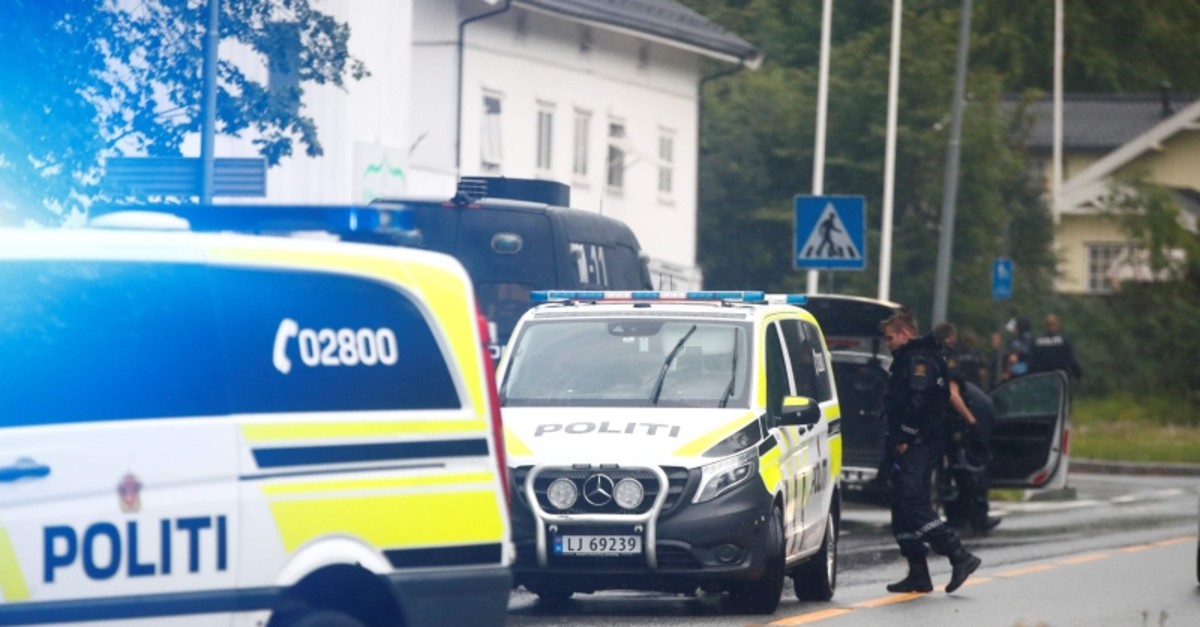 A picture taken on August 10, 2019 shows police vehicles near the al-Noor islamic center mosque where a gunman, armed with multiple weapons, went on a shooting spree in the town of Baerum, an Oslo suburb (AFP Photo)
by Daily Sabah with Agencies
Aug 10, 2019 6:29 pm

Two people were injured in a shooting inside a mosque in a suburb of the Norwegian capital Oslo and the gunman, who attempted to carry out a massacre resembling the Christchurch attack, was detained after being overpowered by mosque visitors on Saturday.

Norwegian police said Sunday that the shooting is being treated as an "attempted act of terror" and that the suspected gunman harbors far-right, anti-immigrant views.

The suspect entered the mosque in the affluent Oslo suburb of Baerum on Saturday armed with multiple weapons and opened fire before being overpowered by a 65-year-old man who suffered minor injuries.

Hours after the attack, the body of a young woman was found in a home in Baerum and police on Sunday confirmed that it was the suspect's 17-year-old stepsister. Investigators launched a murder investigation into the death.

Oslo's acting chief of the police operation Rune Skjold said the investigation into the shooting showed that the suspect, who has not been named, appeared to hold "far-right" and "anti-immigrant" views.

"We are looking at an attempted act of terror," Skjold told a press conference on Sunday.

Skjold cited that the suspect had expressed support for Vidkun Quisling - the Norwegian politician who collaborated with the occupying German forces - and anti-immigrant stances.

The attack took place at the Al-Noor Islamic Centre in Baerum, just west of Oslo. The suspected assailant lived in the area, but police did not know of any motive as he had not been questioned, Skjold said, adding police were checking his online activity. So far nothing suggested there were other assailants involved, police said.

Police were assessing whether it would be necessary to step up security at other mosques on Sunday, the start of the Islamic Qurban Bayram (Feast of the Sacrifice) holiday, also known as Eid al-Adha.

Oslo daily VG later reported that armed police and bomb disposal experts had been seen at a house in Baerum. The suspected assailant was linked to the address, the report said.

Hours after the attack, the body of a young woman related to the suspect was found in a home also in Baerum.

Prime Minister Erna Solberg expressed her sympathy with those who had been present at the mosque or were affected.

"It should be safe to go to the mosque, church or other worship places," she said in a statement, adding it was too early to speculate over a possible motive.

Earlier, mosque board president Ifran Mushtaq told broadcaster TV2 that the incident took place after a handful of members had attended prayers at the mosque.

Mushtaq said three members had stayed behind when the assailant, armed with what appeared to have been two shotguns and a handgun, broke in. "When they saw him come in, two of them took cover. A third member, in his 70s, acted quickly" and managed to overpower the assailant, who fired some shots, Mushtaq told TV2.

Another mosque member then hit the assailant in the back of the head, he added. The assailant wore a protective vest, black clothes and knee pads.

Local daily Budstikka reported that the mosque had stepped up its security measures after a deadly mass shooting at two mosques in Christchurch, New Zealand in March.

Ikhlaq Ahmad, spokesman for the Islamic Cultural Centre in Oslo, Norway's oldest mosque founded 1974, said the incident gives "painful associations" to the Christchurch attacks and to the 2011 attack on a Labour Party youth wing camp that claimed 69 lives. It was carried out by Norwegian right-wing extremist Anders Behring Breivik.

The Al-Noor Islamic Centre was founded in 1983.