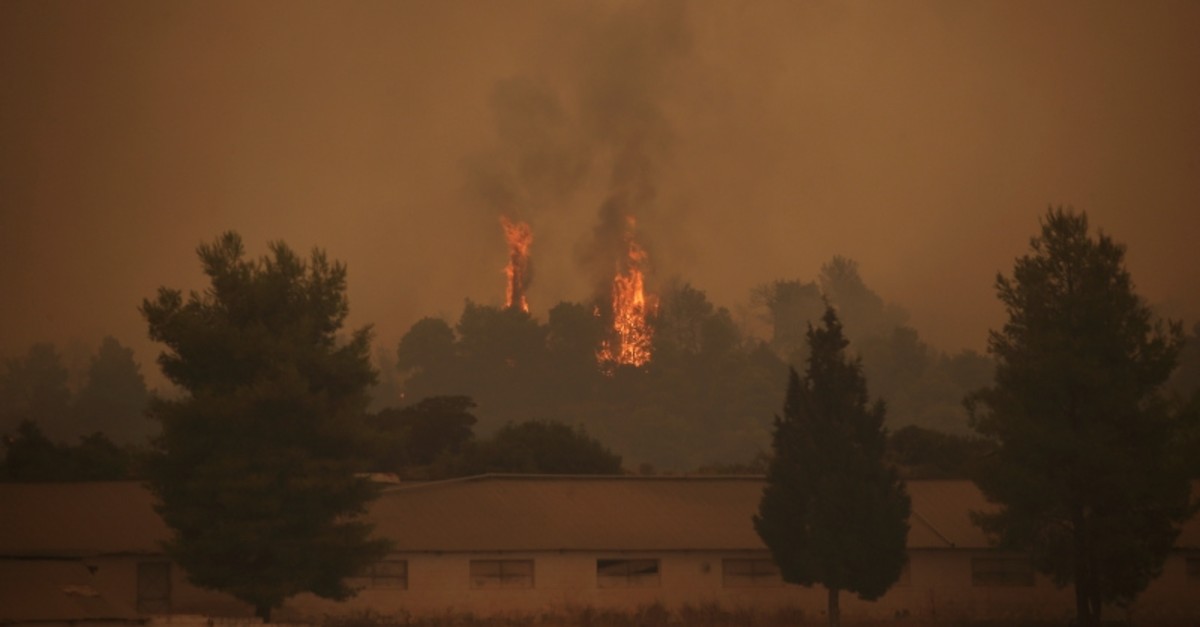 Hundreds of firefighters battled wildfires in Greece Tuesday, with the largest burning through a thickly forested nature reserve on the island of Evia north of Athens where three villages have been evacuated.

More than 220 firefighters were deployed to tackle the fire that was burning out of control in Evia, along with 75 fire trucks, six water-dropping planes and seven helicopters.

Kyriakos Mitsotakis cut short a vacation on his home island of Crete, state TV ERT said, amid a race against time to evacuate hundreds of villagers from Kontodespoti, Makrymalli and Stavros with the flames nearing homes, officials said.

"There are flames all around and it's difficult to breathe... house yards are on fire," Dirfys-Messapia mayor Yiorgos Psathas told state TV ERT, with the smoke billowing as far as Athens.

"We will order more evacuations if the need arises," he added.

The fire on Greece's second largest island after Crete started at about three am (0000 GMT) and was quickly spread by strong winds, the semi-official news agency ANA said.

"The flames are 20-30 meters (65-98 feet) high...you can't even see the sun," Panos Agiannitis, a volunteer firefighter at the scene, told Athens municipal radio.

"The only way for this fire to be extinguished is when there's nothing left to burn," he said.

ANA said the pine forests on Evia are part of the "Natura 2000" European network of protected areas and habitats. 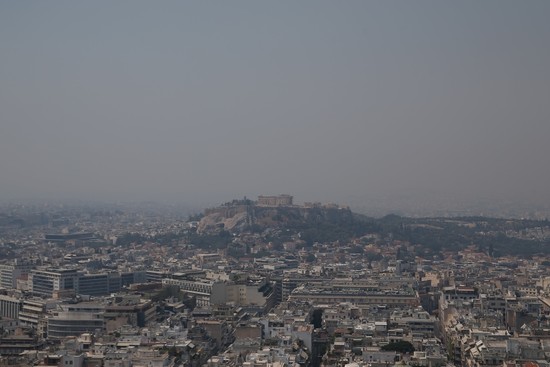 The Acropolis hill with the Parthenon temple is covered with smoke from a wildfire burning the Island of Evia. (Reuters Photo)

Smoke from the fire blanketed the Greek capital in the morning. The country's civil protection authority warned people in affected areas, particularly the elderly, young children and those suffering from breathing or heart conditions, to remain indoors and set air conditioning units to recycle indoor air. The winds also blew the smoke from the blazing pine forest north toward the Magnesia region.

Dozens more firefighters, two planes and a helicopter tackled a separate forest fire on the northern island of Thassos. A third wildfire was burning through brush and dried weeds near Thebes, northwest of Athens, while another broke out in southern Greece, burning woodland and agricultural areas. More than 30 firefighters were tackling the fourth blaze.

Forest fires are common in Greece during the hot, dry summer months. Authorities have repeatedly warned the public not to engage in outdoor activities that could cause fires, such as welding work, burning dried weeds or lighting campfires and barbecues. Parks and forest areas are sometimes closed to the public at times of high fire risk.

Greece has been hit by a spate of wildfires since the weekend amid gale-force winds and temperatures of 40 degrees Celsius (104 F).

On Monday, a major forest fire threatening homes in Peania, an eastern suburb of Athens, was brought under control. At least two houses were burned but there were no reports of injuries.

On Sunday, a fire on the small island of Elafonissos, in the Peloponnese region, was brought under control after a two-day battle.

The fast-moving forest fire broke out in a seaside area and raged through a nearby settlement of mainly holiday homes.

The fire trapped people in their cars as they attempted to flee, while many other victims drowned as they tried to swim away from beaches overcome by heat and choking smoke.