Italy called to act in name of 'humanity' over migrants 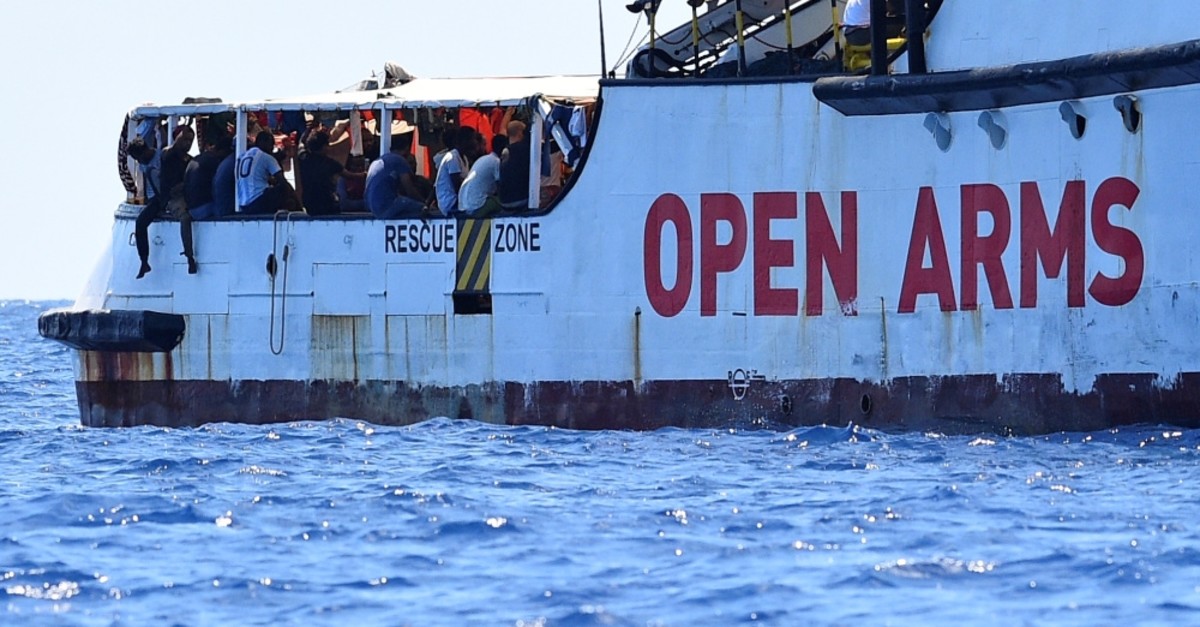 A humanitarian boat carrying 147 migrants rescued at sea was eventually allowed to let several persons disembark on a tiny Italian island for medical reasons, but the others have been stuck aboard for more than two weeks.

Italian Interior Minister Matteo Salvini has ordered his officials to prevent the boat from disembarking the migrants, who were rescued off Libya 16 days ago, in defiance of his own prime minister and despite six European Union nations agreeing to take them. Three migrants who suffered "medical complications which require specialized care" and an escort were brought to the southern Italian island of Lampedusa late Thursday, the Spanish charity Proactiva Open Arms said on Twitter. "All of the people on board need to disembark urgently. For humanity," Proactiva Open Arms added. This was the sixth emergency evacuation of migrants from the vessel. Alessandro Di Benedetto, a psychologist for the charity group Emergency, who had gone on board to speak with the migrants, said early Friday that several had exhibited acts of self-harm or expressed thoughts of suicide, while others were starting to take their anger out on fellow migrants.

This is the umpteenth standoff between a charity vessel rescuing migrants making the perilous journey across the Mediterranean and Salvini, but this time the situation is set against the background of a political crisis in Rome.

Salvini's tough anti-immigration stance has helped boost his popularity at the expense of coalition partner the 5-Star Movement, but his surprise bid to bring down the government and call an election is running into trouble. Prime Minister Giuseppe Conte, who belongs to no political party but is close to the 5-Star Movement, accused Salvini on Thursday of exploiting the issue and said he had convinced six European states to take in the migrants.

"France, Germany, Romania, Portugal, Spain and Luxembourg have told me that they are ready to welcome the migrants," Conte said in an open letter to Salvini, who has sought to bar all charity rescue vessels from entering Italian waters. In a distinct change of tone since the coalition disintegrated last week, Conte slammed what he called Salvini's "obsessive focus" on an immigration policy reduced to the phrase "closed ports."

The Open Arms is anchored off the coast of Lampedusa, which was the scene of mass arrivals for years before Salvini closed Italy's ports to the charity ships who rescue people setting out from Africa in search of a better life in Europe. Salvini has argued that Italy, which lies close to the Libyan coast, should no longer be the main gateway for migrants fleeing Africa for Europe. He accuses the charities of becoming "taxis" for people-smuggling gangs.

Amid a divided response to the Mediterranean migrant rescue crisis, EU countries have long failed to create a more permanent EU redistribution arrangement to prevent migrant tragedies at sea. The Mediterranean Sea continues to be a deadly route, as six people died every day while attempting to reach European shores in 2018. In its report "Desperate Journeys," the U.N. refugee agency said, "An estimated 2,275 people died or went missing crossing the Mediterranean in 2018, despite a major drop in the number of arrivals reaching European shores." The death rate among migrants crossing the sea from Libya to Italy or Malta more than doubled last year as naval search and rescue missions were reduced.