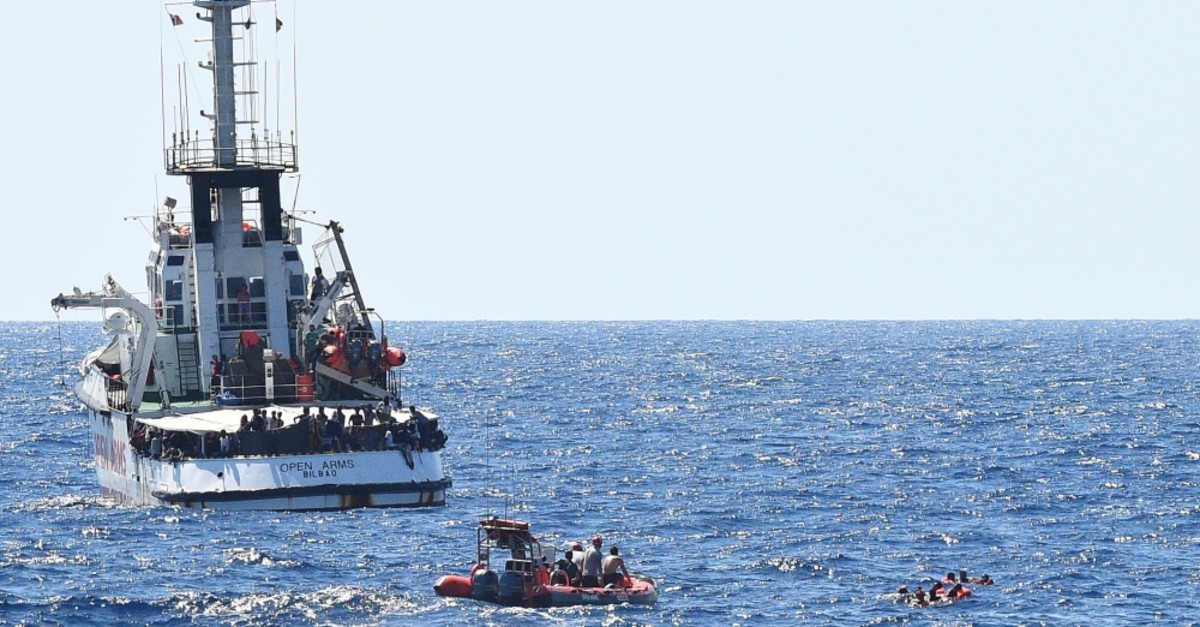 Stuck on board and waiting for days, some migrants stranded off southern Italy jumped overboard and tried to swim ashore while EU countries have silently watched the ongoing tragedy

As the tragedy of illegal migrants near European shores continues, at least 15 migrants jumped overboard from a nongovernmental organization (NGO) rescue boat in desperation. The boat is stranded off Italy's Lampedusa island with no effective response from the EU countries.

The Spanish NGO vessel Proactiva Open Arms has been stuck off Lampedusa for days seeking permission to dock from the Italian government. The situation has grown increasingly tense as migrants grew desperate, many of whom have been on board for 19 days since their rescue off Libya.

The charity says some migrants are suicidal. The passengers are sleeping jammed together on deck and sharing two toilets. Dozens of migrants have been taken ashore since the ship entered Italian waters because they were said to be minors or ill.

"Nine people have thrown themselves into the water... The situation is out of control," the Open Arms tweeted, after earlier posting a video of another migrant who had jumped in the water, his way blocked by an Italian Coast Guard boat.

All nine, some of them without life jackets, were eventually pulled out of the water and were "on board the boat of the Italian coastguard," the NGO spokeswoman said.

The standoff is the latest example of divisions among EU countries on migration. Faced with Italy's protracted refusal to allow the migrants to disembark, Spain eventually offered up its southern port of Algeciras, which the NGO said could "not be achieved" due to the distance and tensions on board.

The Spanish government then offered Mallorca in the Balearic Islands, nearer but still at around 1,000 kilometers from Lampedusa. The charity described this offer as "totally incomprehensible" and continued to demand the ship be allowed to dock in Lampedusa. In a bid to bring an end to an ordeal, the Spanish government said yesterday it was sending a navy ship to Lampedusa to escort the Open Arms to Spain.

Together with Spain, five other EU nations have offered to take the migrants. The details of the offers from France, Germany, Romania, Portugal, Spain and Luxembourg are yet to be finalized, despite the fact that 83 migrants, still aboard for 20 days, have been waiting for a prompt response to end their desperation.

EU member states have long grappled with a common response to migration inflows from northern Africa via the Mediterranean. In June, eight of the 28 EU countries, including France andGermany signaled a clear intention to move forward with a new system called a "solidarity mechanism."

However, they have failed to persuade Italy to allow rescue ships to dock in its ports. Italy's populist government has refused to allow ships carrying people saved from sea to dock as long as too few EU countries promise to regularly admit such migrants.

Tuesday, Spain's Defense Minister Margarita Robles said Madrid would make a new proposal "in the coming hours" to solve this "humanitarian emergency," without elaborating. She railed against Italy's far-right Interior Minister Matteo Salvini, who has been blocking access to the Open Arms.

She said Salvini "has shown he doesn't care about human lives." For his part, Salvini tweeted that "being firm is the only way to stop Italy from becoming Europe's refugee camp again."