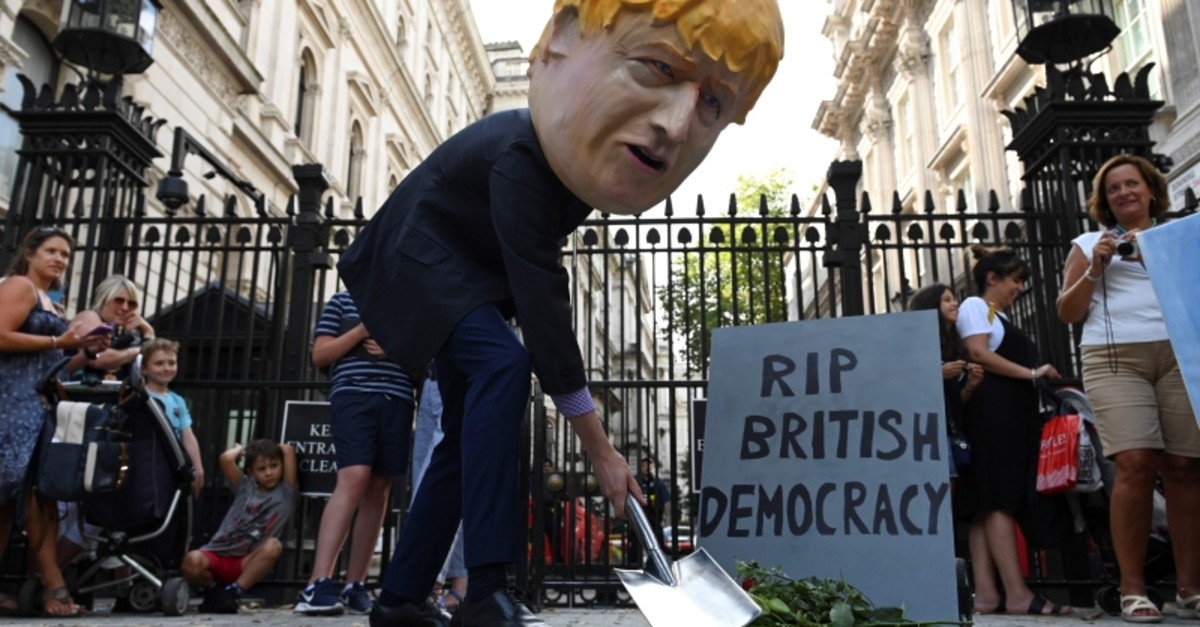 A demonstrator, wearing a mask depicting Britain's Prime Minister Boris Johnson, and a mock gravestone inscribed with the words ,RIP British Democracy, protests outside the gates to Downing Street in central London on August 28, 2019. (AFP Photo)
by Compiled from Wire Services
Aug 29, 2019 10:44 am

More than 1.2 million people have signed a petition calling for the British parliament not to be suspended from mid-September to mid-October as requested by Prime Minister Boris Johnson as thousands took to the street across Britain to protest the decision.

Impromptu demonstrations were held in London, Edinburgh, Cardiff, Manchester, Bristol, Cambridge, and Durham, the Press Association (PA) reported, as the petition against the suspension passed the 1-million mark at around 11 p.m.

Earlier, the queen approved Johnson's plan to suspend parliament from mid-September to mid-October, a move that could hamper efforts by lawmakers to block a no-deal Brexit.

"Parliament must not be prorogued or dissolved unless and until the Article 50 period has been sufficiently extended or the UK's intention to withdraw from the EU has been cancelled," the petition read.

The petition was posted a day before Johnson announced his request to suspend parliament ahead of the country's pending exit from the European Union.

Johnson wants Britain to leave the European Union as scheduled on October 31, even if it means not having a withdrawal deal in place, a scenario that many fear could wreak havoc on the country's economy with ripple effects far beyond.

The monarch's formal body of advisers, the Privy Council, said on Wednesday that the suspension of parliament would take place "no earlier than Monday 9th September and no later than Thursday 12th September 2019 to Monday 14th October 2019."

Johnson requested the suspension earlier in the day in what opposition leaders say is an intentional attempt to thwart their efforts to block a no-deal Brexit by robbing them of valuable parliamentary time.

His proposal was met with outrage by the opposition and some members within his own Conservative party.

Corbyn said he had written the letter to protest "in the strongest possible terms on behalf of my party and I believe all the other opposition parties are going to join in with this," the report said.

Meanwhile, popular Scottish Conservative Party leader Ruth Davidson was expected to quit on Thursday, according to the British media.

Johnson denied the suggestion that his move was motivated by a desire to force through a no-deal Brexit, however, saying in a statement that it would ensure "that there is good time before and after the [EU summit] for parliament to further consider Brexit issues."

Johnson is scheduled to meet other EU leaders at a summit on October 17 and 18 to discuss the terms of the departure.

John Bercow, the speaker of the House of Commons, referred to the move as a "constitutional outrage."

"Shutting down parliament would be an offense against the democratic process and the rights of parliamentarians as the people's elected representatives," Bercow said.

Conservative backbencher Dominic Grieve called it "outrageous," saying that it could lead to a vote of no confidence in Johnson.

"This government will come down," he said.

"It would be a constitutional outrage if Parliament were prevented from holding the government to account at a time of national crisis," the Conservative lawmaker added.

"So it seems that Boris Johnson may actually be about to shut down Parliament to force through a no-deal Brexit," Scottish First Minister Nicola Sturgeon said before the announcement.

"Unless MPs come together to stop him next week, today will go down in history as a dark one indeed for UK democracy," she added.

The European Commission called on Britain to put forward any proposed changes to the Brexit divorce deal as soon as possible, while refusing to comment on Johnson's request to suspend parliament.

"Our working assumption is that Brexit should occur on October 31 and that should happen with a deal," says commission spokeswoman Mina Andreeva. "For that to happen, of course the earlier we see workable proposals, the better."

Also Wednesday, British Brexit negotiator David Frost met with EU counterparts. The commission did not comment on their discussions, however.