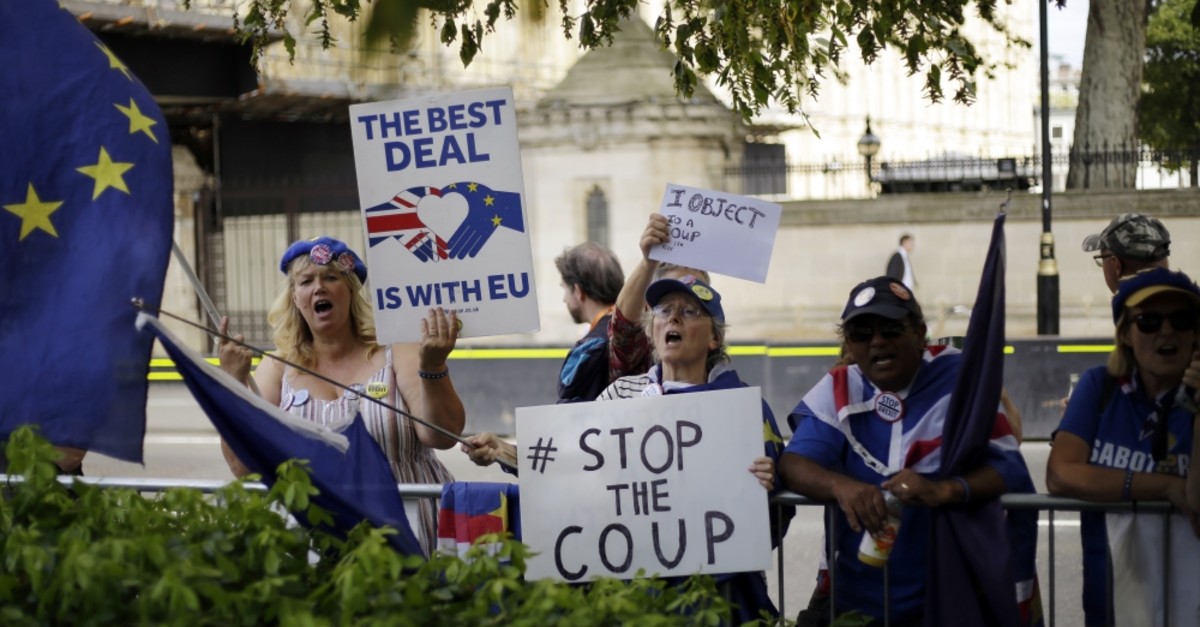 Prime Minister Boris Johnson's suspension of Parliament just weeks before Britain's EU departure date sent shockwaves through the British political system. Johnson announced the surprise decision Wednesday to dismiss Parliament, known as proroguing, for nearly five weeks next month, claiming it was necessary to allow him to pursue a "bold and ambitious" new domestic agenda. However, political opposition to Johnson's move to suspend Parliament crystallized yesterday amid protests, legal action and a petition to block the move, which has gathered more than 1 million signatures.

Thousands of people protested in London, Manchester, Edinburgh and other cities, while an online petition seeking to block the decision had garnered more than 1.3 million signatures. At the biggest rally, crowds gathered near Parliament in London chanting "stop the coup" and waving EU flags.

Queen Elizabeth approved the request to end what has been the longest session of Parliament in nearly 400 years in the second week of September and reopen it on Oct. 14, just over two weeks before Brexit. The House of Commons typically goes into recess around the annual party conference season, which kicks off on Sept. 14 and ends on Oct. 2, but critics slammed this lengthier break.

In a blow for Johnson, popular Scottish Conservative leader Ruth Davidson said she was stepping down after eight years during which she has turned around her party's fortunes. Davidson, who supported staying in the EU, urged Johnson to clinch a deal with Brussels and mentioned the "conflict I have felt over Brexit" in her resignation letter. Johnson's opponents have labelled the suspension of Parliament a "coup" and a "constitutional outrage," and it prompted immediate court bids in London and Edinburgh to halt the process.

Jeremy Corbyn, leader of the main opposition Labour Party, has also written to request an audience with Queen Elizabeth II to voice his opposition to the suspension, as has Liberal Democrat leader Jo Swinson. Labour's finance spokesman John McDonnell said his party would not allow Johnson to behave like a "dictator."

With opposition parties threatening to collapse the government in a no-confidence vote and media reports of Johnson war-gaming an early election if Parliament tries to thwart his Brexit plans, expectations that Britain could be heading to the polls this autumn are growing.

As voters have become increasingly polarized along Brexit lines, Labour has suffered public and political criticism of Corbyn's strategy of trying to keep both "leave" and "remain" voters onboard by not siding with either camp. Instead Corbyn, a longtime euroskeptic in a party where a majority of members oppose Brexit, has sown confusion with his ambiguous position and alienated many voters on both sides.

Labour's vote share dropped by more than 12 percentage points at each of the three by-elections for parliamentary seats so far this year, with parties with more strongly held positions such as the pro-remain Liberal Democrats and the pro-leave Brexit Party on the rise. Voting for seats on local councils in England and the European Parliament elections in May also both showed voters split more by Brexit than traditional party lines.

In the seismic 2016 referendum on Britain's EU membership, 52% voted in favor of leaving the bloc, a result that has left Parliament and the country bitterly divided. Johnson insists Britain must leave by the Oct. 31 deadline, already twice-delayed, with or without a divorce deal from Brussels. Parliament has rejected three times the withdrawal agreement struck between Brussels and the government of Johnson's predecessor, Theresa May.

Euroskeptics objected to a so-called "backstop" provision to keep the Irish border open for people and goods, which would keep Britain closely aligned with the EU. Johnson, who took office barely a month ago, wants the EU to drop the backstop measure entirely, something Brussels has repeatedly ruled out. An EU summit on Oct. 17-18 will likely determine whether there is any scope for compromise. If not, Britain will end its four decades of membership without a deal governing key issues such as future trade relations and citizens' rights.