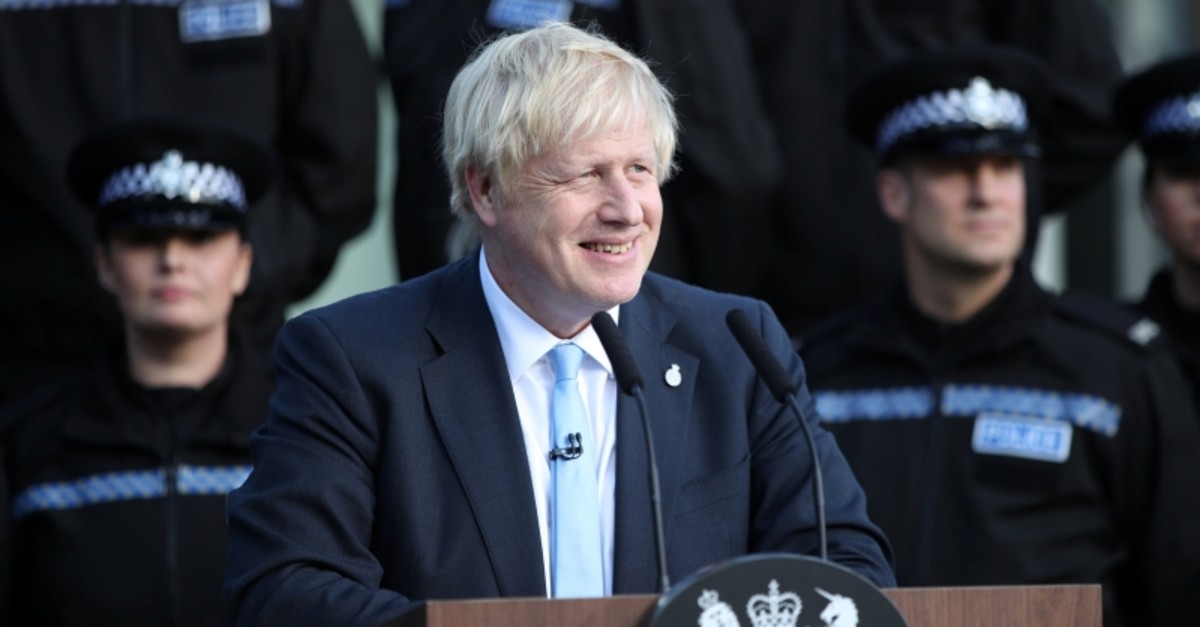 U.K. Prime Minister Boris Johnson said Thursday he would "rather be dead in a ditch" than delay Brexit beyond next month, as he urged opposition lawmakers who oppose his plan to support an early election.

MPs in the House of Commons this week passed a bill that could stop Johnson taking Britain out of the European Union without a divorce deal with Brussels.

But they also rejected his call for a snap election to resolve the political deadlock that has characterized the past three years since the 2016 referendum vote for Brexit.

In a speech in northern England, Johnson said "I'd rather be dead in a ditch" than ask the EU for a Brexit delay.

"We must come out of the EU on October 31," the Conservative leader said, just hours after suffering a fresh blow with the resignation of his brother from government.

The speech, at a police academy in the city of Wakefield, was marred at the end by the apparent collapse of a police cadet standing behind him.

The event was intended to be the first step of an election campaign, before MPs rejected the poll in a vote on Wednesday night.

The vote left Johnson in limbo, his Brexit plan in tatters but with no way out after his parliamentary majority was destroyed by a Conservative party rebellion over the issue.

As a result, his government announced it would try again to force an election with a House of Commons vote on Monday, and he challenged the opposition Labour party to back it.

He expressed regret about his brother Jo's resignation as a junior universities minister a few hours earlier, which only reinforced the sense of a government in crisis.

Jo Johnson had strongly opposed Brexit, and in his resignation statement blamed the "unresolvable tension" between "family loyalty and the national interest".

The prime minister paid tribute to his "fantastic" service, and acknowledged they disagreed on Brexit, "an issue that obviously divides families and divides everybody".

Jo Johnson announced he would not stand at the next election as an MP, another loss to the governing Conservative party, which this week lost its parliamentary majority.

The premier expelled 21 Tory MPs for rebelling over his Brexit plan, while another one dramatically defected to the pro-European Liberal Democrats.

The legislation against a "no deal" Brexit must still pass the House of Lords, but Johnson has accepted that it almost certainly will become law.

It would force him to ask the EU to delay Brexit to January 31 should an EU summit in Brussels on October 17-18 fail to produce a deal, or if MPs fail to endorse "no deal".

The pound surged to a one-month high against the dollar on rising market hopes that Britain can avoid a disorderly end to 46 years of EU membership next month.

Johnson, who took office in July promising to deliver Brexit in all circumstances, is hoping to regain the initiative with an election before the EU summit.

An opinion poll conducted by YouGov on Monday and Tuesday showed his Conservatives leading Labour by 35 to 25 percent.

The pro-European Liberal Democrats were on 16 percent while the Brexit Party of populist Nigel Farage was in fourth place with 11 percent.

But while Labour wants an election, it is wary of holding one before October 31, which could give Johnson a majority with which to push through his plan.

"We're now consulting on whether it's better to go long therefore, rather than to go short," finance spokesman John McDonnell told BBC radio.

Johnson insists he wants a divorce deal with the EU but says the terms agreed by his predecessor Theresa May are unacceptable.

The EU has refused to reopen the text while also complaining that Johnson has yet to come up with any new ideas.

Like the Johnsons, the British parliament and the public remain divided over Brexit, and the prime minister's scepticism about a delay is shared by some across the Channel.

"We can see that another six months would not solve the problem," France's European Affairs Minister Amelie de Montchalin said on Thursday.