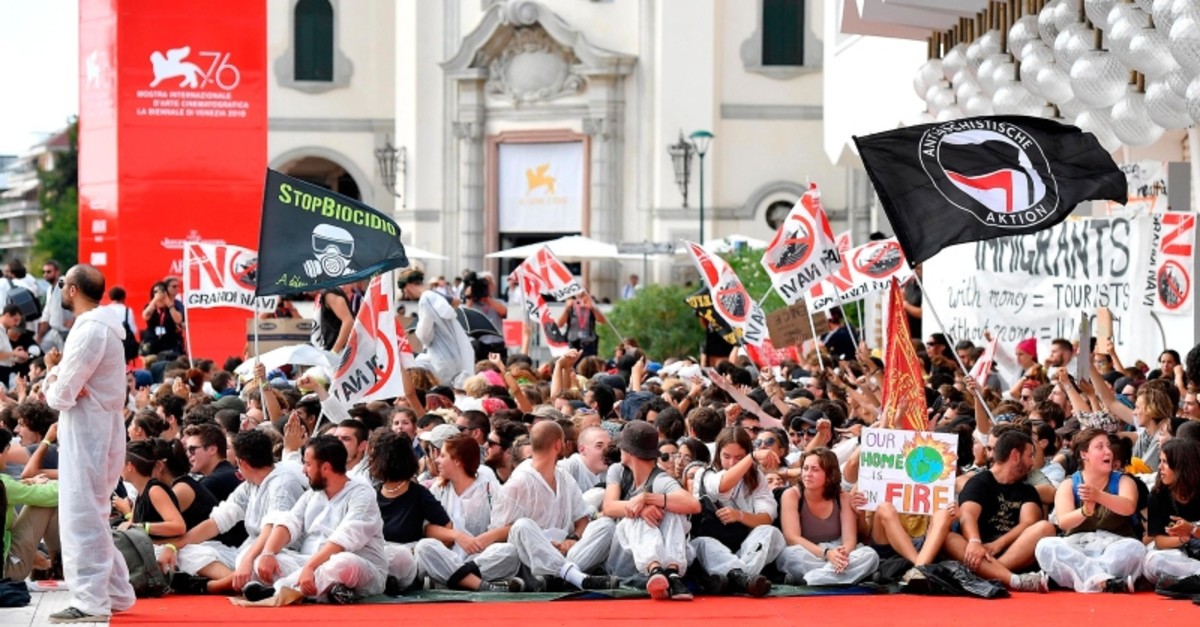 Climate and migration protesters, also to demanding an end to giant cruise ships being allowed to sail right up to the UNESCO city, occupy the red carpet of the 76th annual Venice International Film Festival, in Venice, Sept. 7 2019. (AP Photo)
by Sep 07, 2019 5:10 pm

Hundreds of demonstrators took over the red carpet at the Venice Film Festival for several hours on Saturday, demanding action to fight climate change and a ban on cruise ships entering the lagoon city.

Wearing white boiler suits, the roughly 300 protesters sat on the red carpet where Hollywood stars such as Brad Pitt, Scarlett Johansson and Joaquin Phoenix have premiered their latest films during the 11-day event.

Waving banners that read 'Our home is on fire' and 'No to cruise ships', the protesters sat outside the main festival venue and chanted slogans, surrounded by police.

"We want to address the topic of the climate crisis, we think that it is more important than anything that we can see in the world now," said Chiara Buratti, a member of the Venice anti-cruise ship committee, adding the demonstrators wanted celebrity backing for their cause.

The protesters arrived in the early morning but left peacefully several hours later, around 1200 GMT.

Saturday is the last day of the festival, held on the Venice Lido, and the winner of the Golden Lion prize will be announced in the evening. Buratti said the demonstrators were also planning a march elsewhere on the Lido later in the day.

The protesters, who belong to Italian and foreign groups, were taking part in a five-day Venice Climate Camp event.

"The climate crisis has no borders, why should we stop at some border and just care about some local problems that we have back home," said demonstrator Sina Reisch from the German group Ende Gelande. "We must see that the struggles are connected."

The demonstrators got the support of rocker Mick Jagger and veteran actor Donald Sutherland, who will walk that red carpet later to present their thriller "The Burnt Orange Heresy".

"I am glad they're doing that because they're the ones that are going to inherit the planet," Jagger said at a news conference to promote the movie.

"We're in a very difficult situation at the moment, especially in the U.S. where all the environmental controls that were put in place, that perhaps were just about adequate say for the last 10 years, are being rolled back by the current administration, so much that they will be wiped out."

"I am glad people feel so strongly about it they want to protest anywhere whether it's the red carpet or another place."

Sutherland said environmental protesters had "to fight harder" and "get as much support as they can", adding those calling for the plight of migrants also needed backing.

"When you're my age ... 85 years old and you have children and grandchildren, you will leave them nothing if we do not vote those people out of office in Brazil, in London and in Washington. They are ruining the world," he said. "We have contributed to the ruination of it but they are ensuring it."