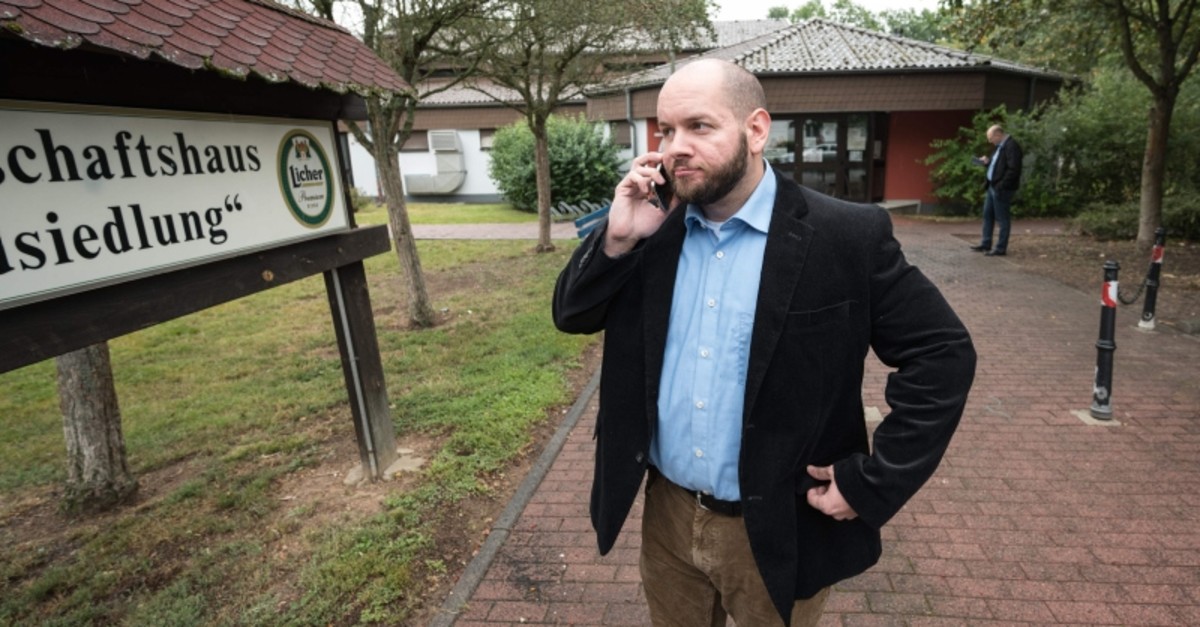 Stefan Jagsch of the far right-wing extremist National Democratic Party (NDP) speaks on the telephone in front of the community house in Altenstadt-Waldsiedlung, on September 8, 2019 (AFP Photo)
by Anadolu Agency Sep 09, 2019 7:29 pm

The unanimous election of a neo-Nazi politician as a local representative in central Germany sparked outrage across the political spectrum on Monday.

Stefan Jagsch, a senior figure of the far-right National Democratic Party (NPD) in the central state of Hesse, was elected local representative of the small Altenstadt-Waldsiedlung district on Thursday, with the support of all conservative, liberal, and social democrat councilors.

Annegret Kramp-Karrenbauer, leader of the conservative Christian Democratic Union (CDU), told public broadcaster ARD that the growing outrage over the vote was understandable.

She called for legal steps to remove the NPD politician from office, and underlined that they would also discuss within the party "how such an incident could have happened."

The CDU representative in Altenstadt-Waldsiedlung's board of councilors voted in favor of the NPD politician, as representatives from the Social Democrat Party (SPD) and liberal Free Democratic Party (FDP) also backed him.

One of the councilors told local media over the weekend that they elected the NPD politician as the local representative of Altenstadt-Waldsiedlung because no one else had adequate knowledge of computers or the internet.

The local representative, often called an "Ortsvorsteher," represents the district within the municipality.

SPD Secretary General Lars Klingbeil heavily criticized the vote and backed calls for a new vote to remove the NPD politician from office.

"We do not cooperate with Nazis! Never!" he stressed, adding that this should be the case not only in federal politics but also at the level of state or local politics.

German press agency DPA reported on Monday that the CDU, SPD, and FDP have agreed to file a joint motion for a new vote.

The local representative can be removed from office by a two-thirds majority on the board of councilors.

NPD is a small party that the Constitutional Court two years ago said resembled Adolf Hitler's Nazi party but stopped short of banning it because it was too weak to endanger democracy.

The killing of a regional politician on June 2 by a man with a long history of neo-Nazi activity has escalated fears of far-right violence in the country. Walter Luebcke's murder has revived a debate about whether Germany is doing enough to combat far-right groups, after the chance discovery in 2011 of a neo-Nazi cell, the National Socialist Underground (NSU), whose members murdered eight Turks, a Greek man and a German policewoman between 2000 and 2007. A recent Civey poll showed 60% of Germans think the government is "doing too little" to tackle the problem.