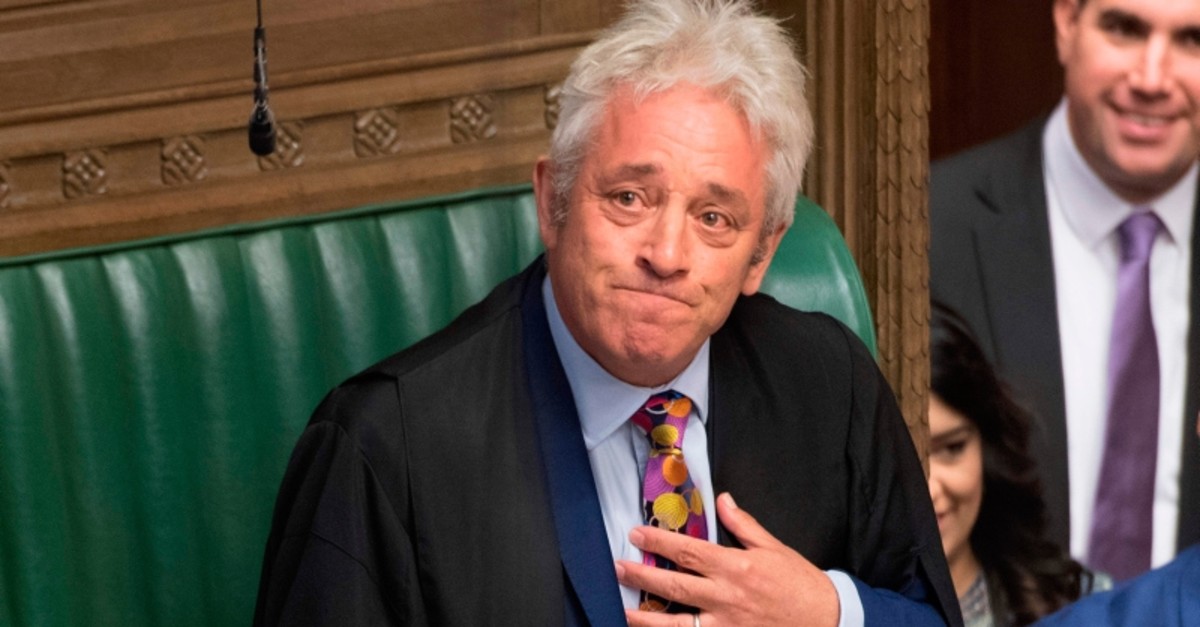 Bercow giving a personal statement in the House of Commons in London on September 9, 2019 to announce that he will stand down as the Speaker of the House of Commons on October 31 at the latest. (AP Photo)
by Associated Press
Sep 10, 2019 8:52 am
A colorful era in British parliamentary history is coming to a close with Speaker of the House John Bercow's abrupt announcement Monday that he will leave his influential post by the end of October.

That means he won't be sporting his festive designer ties beneath his solemn robes or clamping down on rude lawmakers with his patented pleas for "orrr-duhhh" from his elevated podium for much longer.

His decision to step down is in keeping with the British tradition that a speaker shouldn't serve too many terms. Bercow has been in the powerful post since 2009, and had earned the enmity of many Conservative Party kingpins who, in a break with normal practice, were planning to challenge him at the next election, which is expected shortly.

Bercow's emotional announcement drew sustained applause from the House and heartfelt thanks from friends and foes alike. He shed a few tears and choked up several times as he explained it was time for him to step down, in part because of family obligations.

"Throughout my time as speaker I have sought to increase the relative authority of this legislature for which I will make absolutely no apology to anyone, anywhere, at any time," he said.

He also seemed to warn about weakening Parliament's role at a time when the institution is in conflict with the prime minister.

"We degrade this parliament at our peril," he said. "I have served as a member of Parliament for 22 years, and for the last 10 as speaker. This has been, let me put it explicitly, the greatest privilege and honor of my professional life for which I will be eternally grateful.

It was a rare instance in which opposition Labour Party leader Jeremy Corbyn and Conservative Cabinet minister Michael Gove agreed, both praising Bercow for his commitment to the democratic process.

"Our democracy is the stronger for your being the speaker. And whatever you do when you finally step down from Parliament, you do so with the thanks of a very large number of people," Corbyn said.

Gove said: "Your commitment to your principles and to your constituents is unwavering and an example to others."

Bercow, 56, began his career as a right-of-center conservative, but gradually morphed into someone perceived as an enemy by the Conservative Party power structure, largely because he was seen as a stout defender of Parliament's rights.

The speaker is supposed to be strictly impartial in the British system, and Bercow resigned from the Conservative Party as expected when he was elected to the post by secret ballot, but he has been outspoken in his criticism of Prime Minister Boris Johnson's decision to suspend Parliament, which is due to take effect later Monday.

He called it a "constitutional outrage." Some said that was a partisan statement, but many longtime Bercow watchers believed it was simply an assertion of his view that Parliament is sovereign and must be respected, not silenced.

Bercow's decision to speak out is consistent with the way he sees his role — protecting the primacy of Parliament from encroachment, either by an overzealous prime minister, an intrusive British judge, or by the European Union.

His last possible day in office is the day when Britain is scheduled to leave the 28-nation EU bloc. Bercow hasn't taken a public stance on Brexit, but lawmakers looking to leave the EU as quickly as possible tend to view him as an obstacle.

Bercow has played a pivotal role in the seemingly endless debates over Brexit. Bercow determines which amendments will be voted on and who will be called upon to speak, and uses his position to silence rabble rousers and rule on questions of parliamentary procedure.

He has a long tradition to protect — the speaker's role can be traced back to at least 1377.

There is no question that many of Johnson's allies see Bercow as a foe in the Brexit battle, a perception enhanced perhaps by the fact that his wife's car has an anti-Brexit bumper sticker. He has been called "Speaker of the Devil" in a front-page headline for challenging the government's position.

Despite the frequent grumbling about his outspoken nature, Bercow has been re-elected to the position twice.

During general elections, speakers generally run unopposed by the major political parties and refrain from taking political stands. They are designated only as "speaker seeking re-election" rather than as representatives of a specific party.

But annoyed Conservative Party leaders had indicated over the weekend they planned to sunder this tradition and challenge Bercow in his home district in an effort to force him out of Parliament.

Bercow will be giving up more than the spotlight. The position of speaker comes with handsome benefits, including housing and a spacious office in the Parliament complex.

Bercow has clashed with prior governments as well. He infuriated former Prime Minister Theresa May by making her efforts to bring her defeated Brexit bill back to Parliament more difficult when he ruled she couldn't bring the same bill back for a repeat vote.

He has also faced charges of bullying, but has denied any wrongdoing.

Bercow is an aficionado of American politics and there is speculation he will make a lucrative speaking tour to the U.S. once he leaves office.