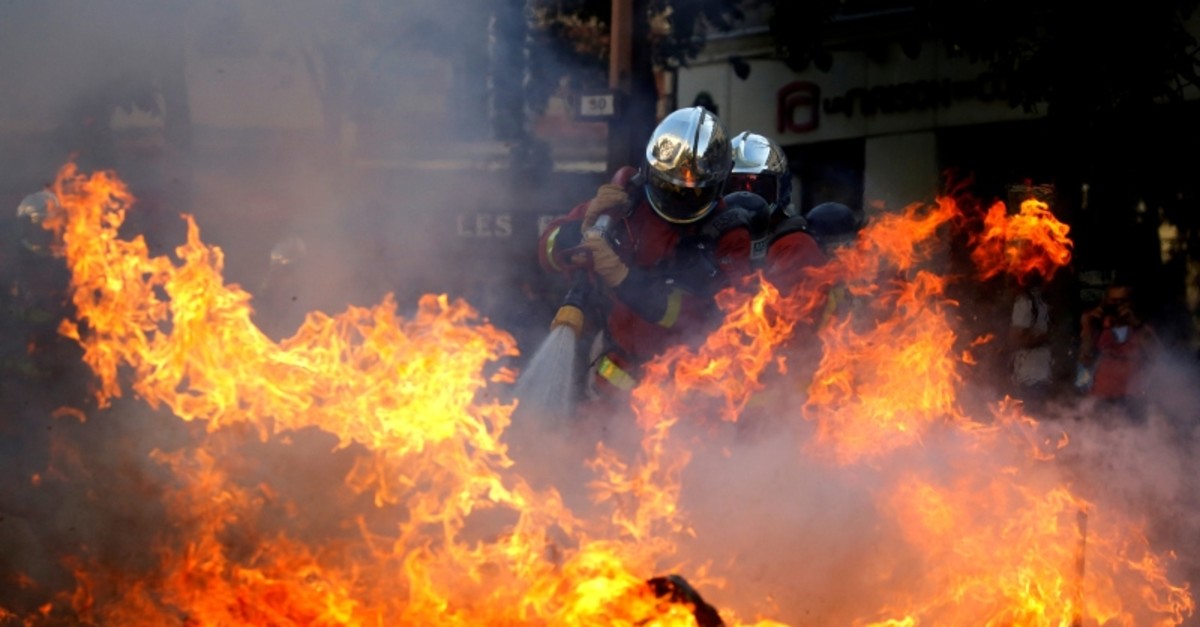 French police used tear gas against protesters from two different movements in two separate parts of the capital city on Saturday, and made at least 163 arrests.

Following clashes on the outskirts of a climate protest, security forces in the southern part of central Paris deployed tear gas, police said.

Television pictures showed burning e-scooters and rubbish bins on fire during the demonstration, which was joined by about 15,000 people according to independent estimates.

The government deployed a massive police presence as it feared yellow-vest supporters and other activists, including "black bloc" anarchists, would take advantage of authorized protests over climate change and pension reform.

Some 7,500 police were mobilized, several districts including the Champs-Elysees were made out-of-bounds for protests, and over 30 metro stations closed.

The climate rally saw sporadic confrontations between police and masked demonstrators who had infiltrated the march.

Groups wearing black clothing associated with the so-called black bloc anarchist movement formed barricades, set fire to bins and a motorbike, and threw paint over the front of a bank.

The violence tarnished an otherwise peaceful march that brought thousands of people, including some yellow vests, onto the streets, a day after marches in Paris and other cities worldwide to demand government action against climate change.

Demonstrators carried slogans like "End oil now" and "End of the world" while some held carnival effigies, including one of President Emmanuel Macron wearing a crown marked "King of bla-bla."

The yellow vests, named after motorists' high-visibility jackets, were holding a 45th consecutive Saturday of action. The movement emerged late last year, triggered by fuel tax rises and swelling into a revolt against Macron's style of government.

Some of their protests have been marked by rioting, partly blamed on black blocs.

A separate march on Saturday was called by the FO trade union to contest the government's planned overhaul of France's retirement system. The proposed reform prompted a strike by metro workers on Sept. 13, shutting most of the underground network.

The authorities have also been taking precautions so protesters do not disrupt an annual heritage event this weekend that gives the public special access to many historic sites.

Some sites like the Arc de Triomphe monument have been closed while others like the Elysee presidential palace have required visitors to register in advance.