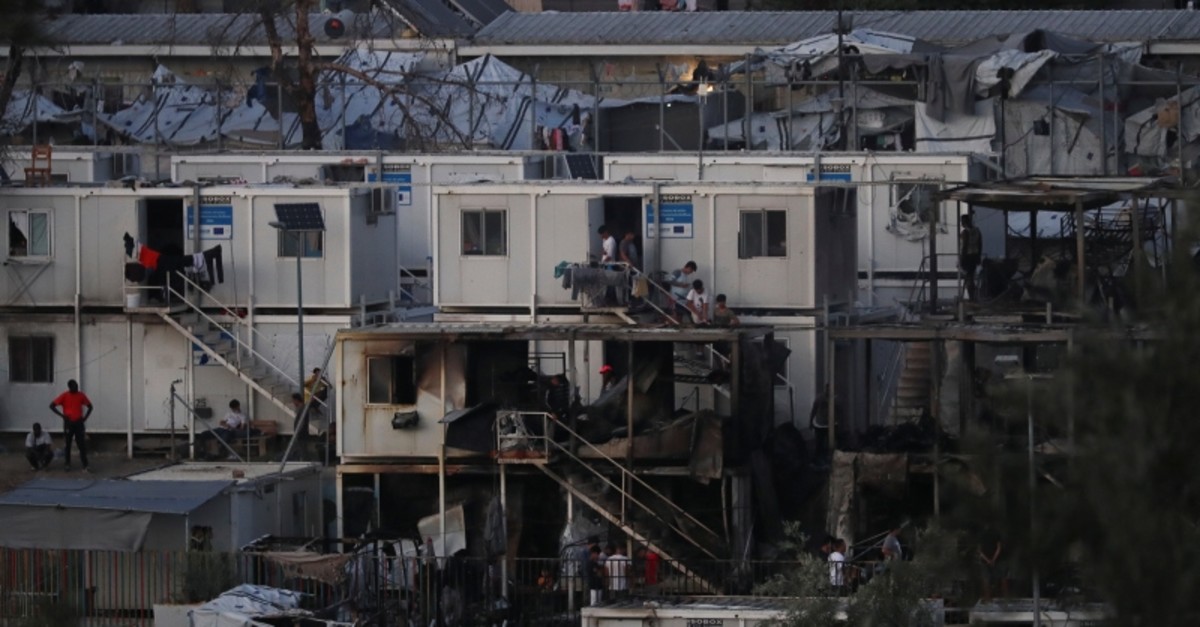 Refugees and migrants are seen around burnt containers following a fire in Moria camp on the island of Lesbos, Greece, Sept. 29, 2019. (Reuters Photo
by Associated Press Sep 29, 2019 8:20 pm
Migrants protesting at an overcrowded camp on the Greek island of Lesbos set fires and clashed with police Sunday, authorities said.

Police and local authorities said there were unconfirmed reports of two fatalities at the Moria camp. The protesters were demanding to be transferred to the Greek mainland.

"The situation is tense," Lesbos mayor Stratis Kytelis told The Associated Press. "There is information about a dead mother and her child. We haven't been able to confirm that yet."

UNHCR Greece later tweeted that "we learned with deep sadness that the lives of a woman and a child were lost in a fire on (Lesbos) today."

Greek police spokesman Lt. Col. Theodoros Chronopoulos told the AP that the migrants set a blaze at an olive grove outside the camp just before 5 p.m. (1400 GMT; 9 a.m. EDT) and, minutes later, inside the camp. Kytelis said that both fires were later extinguished, but he wasn't yet able to enter the camp to assess the damage or confirm the deaths.

Separately, Greek police said a speeding car carrying 12 Afghan migrants ran through a red light and crashed into a vehicle coming from a side street, killing its driver, a 64-year-old Greek man.

Police said one migrant was seriously injured and three others were slightly injured in the crash Sunday morning on a road between Kavala and Thessaloniki in northern Greece. Some of the migrants were found in the sedan's trunk.

The driver of the car with the migrants has been arrested. Police said he is a 25-year-old Moldovan trafficker who was taking migrants toward Thessaloniki, 22 kilometers (14 miles) to the west.

When asked by the AP whether the trafficker's car was being pursued, a police spokesman said that wasn't the case. But other police officials said the car might have been monitored by authorities in an unmarked vehicle. All spoke on condition of anonymity because the case is ongoing.