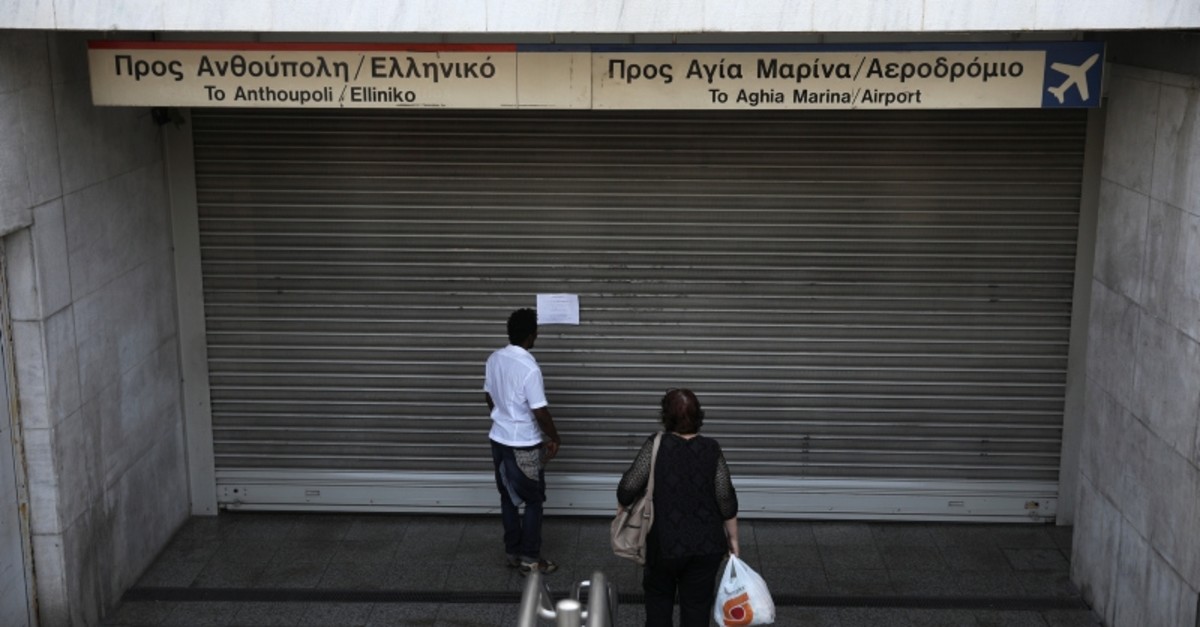 People read an announcement at a closed metro station, during a 24-hour general strike in Athens, Greece, Oct. 2, 2019. (Reuters Photo)
by Oct 02, 2019 11:37 am
Greek private sector workers walked off the job on Wednesday in a 24-hour strike, the second such walkout nationwide within a week, to protest against labor reforms planned by the conservative government.

Ships stayed docked in port, trains pulled out of service and bank services were disrupted. Protesting workers, pensioners and the unemployed are expected to march through the streets of Athens around midday.

Prime Minister Kyriakos Mitsotakis' government plans to change some rules on the calling of strikes, allow some changes to collective wage pacts and set up a registry for unions, which accuse the government of trying to control or weaken them.

Unionists also believe the reforms will not help reduce unemployment, at about 17% the highest in the euro zone, or bring the amount of economic growth the government has promised. The bill is expected to be voted on this month.

"Those provisions must be withdrawn now," said GSEE, the country's largest labor union, which represents about 2.5 million workers.

In recent years turnout in rallies has been low, mainly due to fatigue after years of crisis that led to three international bailouts in exchange for pension and wage cuts, tax hikes and unpopular labor reforms.

Greece exited its third bailout program in 2018, two years after returning to growth.

Its fiscal and reform progress is still being monitored by its lenders, who expect it to achieve an ambitious primary surplus target of 3.5% of GDP annually up to 2022 and 2.2% thereafter.

The International Monetary Fund has also called for the labor market to be further freed up.

Mitsotakis' government has promised to negotiate a lowering of the targets with European lenders and wants to distribute a retirement bonus to pensioners next year, as his leftist predecessor did before losing the elections in July.

He has also pledged to increase wages by reducing social security contributions and ease taxation to attract investors.