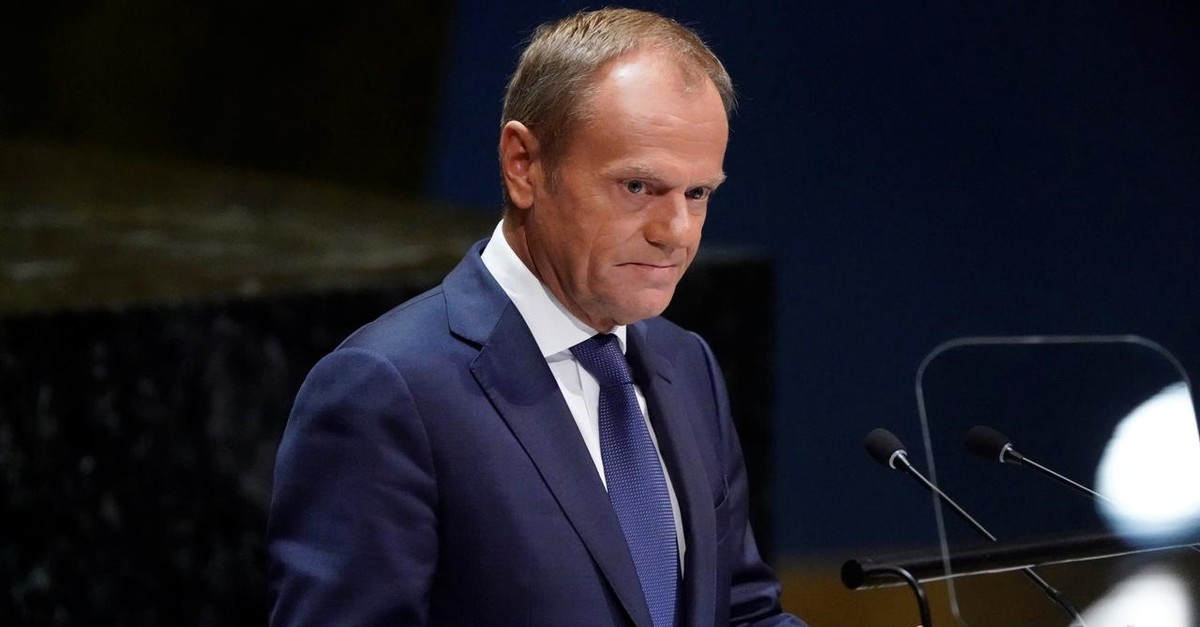 Donald Tusk, President of the European Council addresses the 74th session of the United Nations General Assembly at U.N. headquarters in New York City, New York, U.S., September 26, 2019. (Reuters Photo)
by reuters
Oct 04, 2019 9:38 am
The European Union and Ireland said on Thursday that Prime Minister Boris Johnson's Brexit proposals were unlikely to yield a deal, with Dublin bluntly warning that Britain was heading towards a no-deal exit unless it made more concessions.

The European Union said it fully backed Ireland and that while it was open to discussions, it was still unconvinced about Johnson's plan - cast by British officials as the final offer to avert a no-deal Brexit on Oct. 31.

Just 28 days before the United Kingdom is due to leave the EU, both sides are positioning themselves to avoid blame for a delay or a disorderly no-deal Brexit.

Johnson says he wants an agreement but insists there can be no further Brexit postponement.

The cool reception from Brussels to Johnson's proposal indicates just how far apart the two sides are on the first departure of a sovereign state from the EU, which was forged from Europe's ruins after World War Two.

Irish Prime Minister Leo Varadkar, who is key to any possible deal, said he did not fully understand how the British proposals might work and that Dublin could not sign up to a treaty that did not safeguard an open Irish-British border.

"My judgement is that Boris Johnson does want a deal and that the paper that was published yesterday was an effort to move us in the direction of a deal. But...if that is the final proposal, there will be no deal," Coveney told parliament.

"We remain open but still unconvinced," Tusk said. After speaking to Varadkar, European Commission President Jean-Claude Juncker said the proposal had a number of problematic issues.

Johnson made what his office said was his final Brexit pitch to the EU on Wednesday, offering a possible compromise on the most contentious issue that initially drew a cautious welcome by the EU.

Johnson went further than many expected on trying to solve the dilemma over the border between British-ruled Northern Ireland and EU member Ireland - with a proposal for an all-island regulatory zone to cover all goods. This would replace the so-called "backstop" arrangement he says he cannot accept.

Besides the concession, however, Johnson proposed giving Northern Ireland's institutions the ongoing power to abide by or exit the regulatory zone - a possible step too far for Ireland and the EU.

Johnson's Northern Irish allies poured scorn on their Irish neighbours for their negative reaction to Johnson's offer and said their stance paved the way for a no-deal exit.

"The proposal won't be amended," said Arlene Foster, the leader of the Democratic Unionist Party. "We are certainly moving into the territory of no-deal despite the fact that our prime minister has put forward a reasonable deal to the European Union.

While the EU was careful not to dismiss the British proposals outright, officials in Brussels were extremely cool about the move.

It can only be a starting point to more talks, according to officials and diplomats dealing with Brexit in EU hub Brussels.

"It does not contain any decent solution for customs. And it erects a hard border on the island of Ireland," said a senior EU official, saying the plan "can't fly" as it stands.

An EU diplomat said the plan would need to be fundamentally reworked to become acceptable. Time was short before EU leaders meet in Brussels on Oct. 17 and 18 for a make-or-break Brexit summit, the person said.

Amid so much pessimism about the possibility of a deal in just weeks, many diplomats say a phoney struggle is underway between London and Brussels to apportion responsibility for any failure.

Johnson, who has also tried unsuccessfully to hold an election, says he wants to strike a deal at the EU summit. But a law passed by his opponents in parliament forces him to delay Brexit unless he strikes a deal, something he says is "pointless and expensive".

While the divorce accord struck by Johnson's predecessor, Theresa May, was rejected three times by the British parliament, Johnson received cautious support on Thursday from many of the pro-Brexit Conservative lawmakers who helped defeat May's deal.

Steve Baker, the head of the influential eurosceptic European Research Group of Conservatives, described the government's proposals as "the possibility of a tolerable deal".

"While as I stand here today we are some way from a resolution, it is to the credit of our European friends that they have accepted the need to address these issues," Johnson told parliament.

"We have made a genuine attempt to bridge the chasm, to reconcile the apparently irreconcilable. And to go the extra mile as time runs short."