9 injured after stolen truck slams into cars in Germany 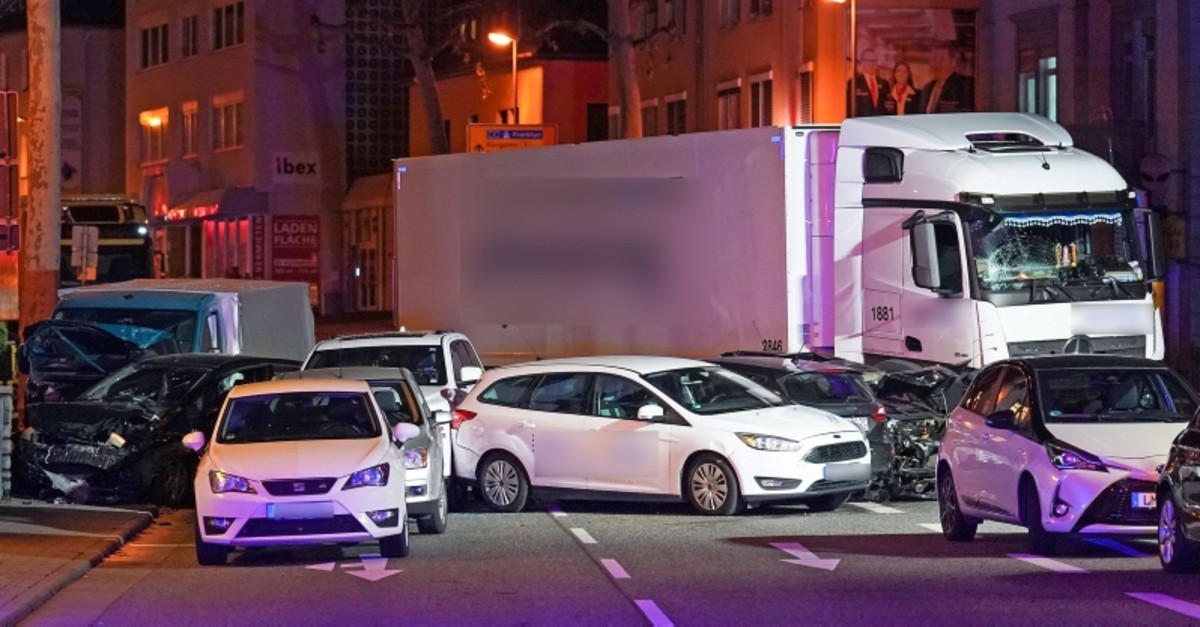 Picture shows the scene where a stolen truck crashed in to cars stopped at a red light in Limburg, western Germany, on October 7, 2019, leaving several people injured (AFP Photo)
by Oct 08, 2019 10:12 am

A stolen truck plowed into several cars in the center of the German city of Limburg leaving nine people injured, police said Tuesday, adding that the driver had been detained.

Police said it was too soon to speculate about a motive for the incident, which began when a man seized the truck at 5:20 pm (1520 GMT) on Monday.

"We currently do not have sufficient information about what was behind it," the police said.

The white articulated lorry slammed into around nine cars waiting at a traffic light opposite the courthouse in Limburg in western Hesse state, crushing them together.

Police said "around nine people were slightly injured," including the driver of the stolen vehicle.

Police staged a major deployment of officers and vehicles, with a helicopter circling overhead the city of 35,000, about an hour's drive from Germany's financial capital of Frankfurt.

The site was cordoned off by police and brightly lit up as tow trucks removed the damaged cars one by one.

The original driver of the truck, who was not named, was quoted by daily Frankfurter Neue Presse (FNP) as saying a man had "dragged" him out of his lorry.

He said the man, in his 30s with short dark hair and a full beard, had yanked open the driver-side door and stared at him wide-eyed before forcing him out of the vehicle.

The truck sped into the parked cars a few hundred meters (yards) further on and came to a stop on the central reservation of a six-lane road.

When the man behind the wheel of the truck emerged from the crash, several passers-by provided first aid, FNP said.

Bettina Yeisley from Limburg, whose office is next to the scene of the crash, told FNP that she heard a loud bang and ran out onto the street with colleagues.

They found the man sitting beneath a tree, without knowing the circumstances.

"He was bleeding from the nose, his hands were bloody, his trousers torn. He said that everything hurt. I asked him his name and he said, 'My name is Mohammed'."

Authorities urged users of social media not to jump to conclusions on the motive.

"We are not ruling anything out," a spokesman for the state police force said, quoted by DPA said. "But we call on you: don't take part in speculation!" the regional police wrote in several tweets.

Germany has been on alert following several terrorist attacks in recent years claimed by the Daesh terrorist group.

The most deadly was committed in 2016 by 23-year-old Tunisian Anis Amri, who killed 12 people when he stole a truck and plowed it through a Berlin Christmas market.

The Office for the Protection of the Constitution, Germany's domestic security watchdog, warned in April of an increased risk posed by Daesh fighters returning from Syria and northern Iraq.

Its director Thomas Haldenwang said that an estimated 2,240 terrorists with "terrorist potential" were living in Germany.