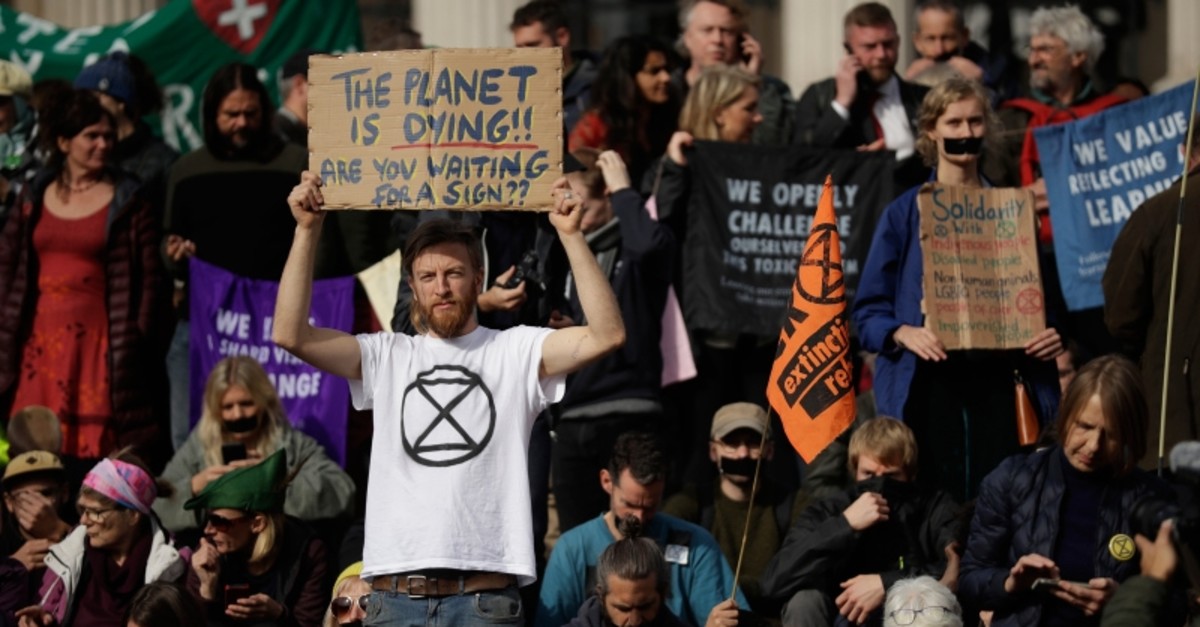 Extinction Rebellion protesters disrupted rail services in the east of London early Thursday, sparking a physical confrontation between angry commuters and an activist who had climbed onto the roof of a London Underground train, video on social media showed.

British Transport Police said they had responded to incidents at Shadwell, Stratford and Canning Town, near to London's Canary Wharf financial district.

Footage showed protesters unfurling an Extinction Rebellion protest group banner on top of a stationary London Underground train at Canning Town before one was pelted with food and physically dragged off by commuters.

"Arrests have already been made and officers are working to quickly resume services," the police said in a statement.

Extinction Rebellion launched a wave of civil disobedience on Oct. 7 to highlight the risks posed by climate change and the accelerating loss of plant and animal species.

Police in London said Wednesday they had arrested 1,642 people since the protests started.

Previously a lawyer working with Extinction Rebellion climate protesters in London said the group hopes a court hearing on Thursday will rule that a police ban on their public gatherings this week is unlawful, as U.N. experts said it violated their human rights.

The Metropolitan Police said Monday it had tightened rules on the two-week Extinction Rebellion "Autumn Uprising" because there had been breaches of public order regulations and "ongoing serious disruption to the community."

"Anyone who fails to comply... is liable for arrest and prosecution," it added on its website.

At an Extinction Rebellion rally in London's Trafalgar Square on Wednesday, speakers denounced the protest restrictions before a crowd of nearly 500 activists, flanked by police in day-glow vests.

"When the state tries to shut down lawful, peaceful protest, you know the state has lost its argument," he said, as activists — many with black tape over their mouths — hoisted magenta and blue silk flags sporting Extinction Rebellion's hourglass logo.

Bennett, speaking through a megaphone, said greater restrictions on civil rights to protest were something "we should all be very worried about."

Caroline Russell, a Green Party member of the London Assembly, said "it is absolutely essential that we stand firm about the right to protest."

In the crowd, activists carried homemade placards reading, "Banning peaceful protest is like banning fire alarms" and "We know it's scary! But silencing us won't make it go away."