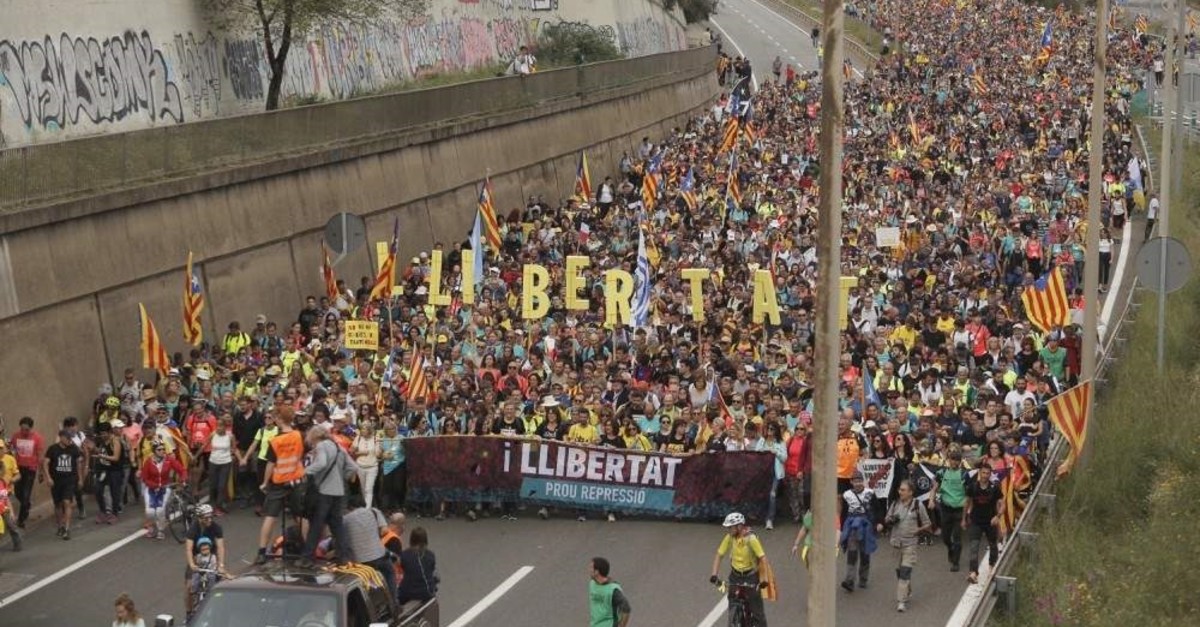 Protesters march into the city on the fifth day of protests over the conviction of a dozen Catalan independence leaders in Barcelona, Spain, Friday, Oct. 18, 2019. (AP)
by Compiled from Wire Services Oct 18, 2019 8:34 pm

Spain's protest-hit northeast was gripped by a general strike Friday as thousands of "freedom marchers" were due to converge on Barcelona for a mass show of dissent over the jailing of nine Catalan separatist leaders.

Workers were also downing tools in a mass show of dissent over Monday's Supreme Court verdict in which the separatist leaders were handed long jail terms over a banned referendum and an abortive independence declaration two years ago.

As well as the strike, several thousands of people were due to end a three-day march to Barcelona from five regional towns in another coordinated move aimed at causing chaos on roads and highways in a region that accounts for about a fifth of Spain's economic output.

Catalan separatists burned barricades and clashed with police in Barcelona Thursday in the fourth night of violence triggered by Spain's jailing of nine of their leaders over a failed independence bid.

According to Agence France-Presse (AFP), hundreds of young protesters chanting "independence" set fire to improvised roadblocks in the center of the city late in the evening, tossing Molotov cocktails at police, who responded by firing foam and anti-riot rounds.

Tensions between Madrid and Catalonia have been rising since Monday when Spain's Supreme Court sentenced nine politicians and activists to up to 13 years in jail.

The sentences set off the worst sustained street violence Spain has seen in decades, with clashes between protesters and police, posing a major challenge both for the Spanish government and pro-independence regional authorities.

While Catalan president Quim Torra has sanctioned and even encouraged civil disobedience, his government is also responsible for the regional police who are charged with controlling demonstrations, putting him in an uncomfortable position.

Separatists blocked a number of roads across Catalonia by burning tires while the commuter rail service in Barcelona was intermittently disrupted due to demonstrators on the tracks, officials said.

Several roads and highways were also blocked off due to the mass marches which departed on Wednesday from five Catalan towns heading for Barcelona.

The Clasico between Barcelona and Real Madrid, Spain's biggest football match, has been postponed due to the protests.