At least 200 injured in police clashes with protesters in Spain 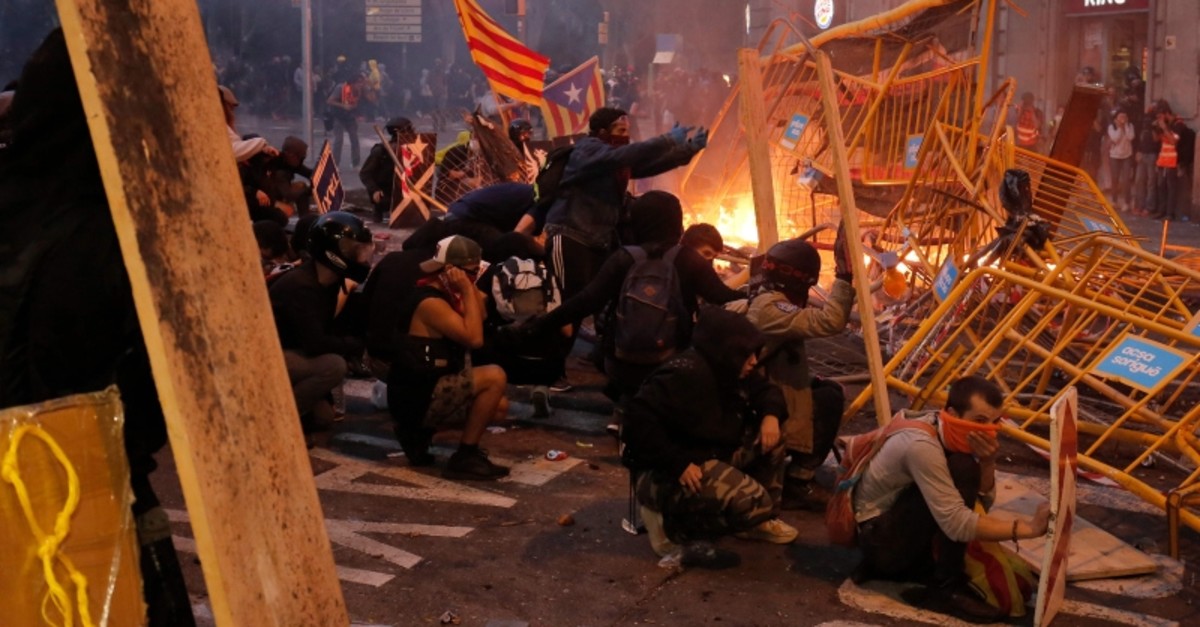 Nearly 200 people were hurt in another night of violent clashes in Catalonia, authorities said Saturday, after protesters hurled rocks and fireworks at police who responded with teargas and rubber bullets.

In Barcelona, which resembled a chaotic battleground Friday, 152 people were injured, with dozens more hurt in the rest of Catalonia, taking the total to 182.

The deterioration came on the fifth consecutive day of protests in the Catalan capital and elsewhere over a Spanish court's jailing of nine separatist leaders on sedition charges over a failed independence bid two years ago.

Emergency services had already reported 500 injured since Monday even before the latest clashes erupted.

According to the interior ministry, 83 people were detained in the overnight violence, in addition to the 128 arrests police had reported before Friday's march.

Early Saturday, the air in the Catalan capital was still heavy with a burning stench as municipal workers cleared the streets of broken glass, rocks and rubber bullets, and repaired pavements where bricks had been ripped out.

Around half a million people had rallied in Barcelona on Friday in the biggest gathering since Monday's court ruling as separatists also called a general strike in the major tourist destination.

While most marchers appeared peaceful, hordes of young protesters went on the rampage near the police headquarters, igniting a huge blaze that sent plumes of black smoke into the air, as police fired teargas to disperse them, an AFP correspondent said.

Other fires raged near Plaza de Catalunya at the top of the tourist hotspot Las Ramblas, where hundreds of demonstrators rallied in defiance of the police, who tried to disperse them with water cannon.

"Anti-fascist Catalonia!" they roared. "The streets will always be ours!"

Scores of police vans could be seen fanning out around the streets, their sirens screaming as the regional police warned people in a message in English on Twitter "not to approach" the city center.

Earlier, many thousands of "freedom marchers", who had set out to walk from five regional towns on Wednesday, arrived in Barcelona wearing walking boots and carrying hiking poles.

The rally coincided with the general strike, prompting the cancellation of flights, the closure of shops, business and several top tourist attractions, and slowing public transport to a trickle in a region that accounts for about a fifth of Spain's economic output.

In downtown Barcelona, many shops and luxury outlets were closed on the city's Paseo de Gracia, with blackened, charred patches a testimony to the nightly clashes that have raged since Monday.

"With these demonstrations bringing this large city to a halt, we are using Barcelona like a microphone," said 23-year-old engineering student Ramon Pararada.

"It's all in reaction to the injustice," he said.

Retired lawyer Jaume Enrich said the court sentence was "the straw that broke the camel's back".

"Madrid is putting Spanish unity above everything, including basic rights," he told AFP, wearing a badge saying "No surrender".

With the region mired in chaos, football authorities canceled the Barcelona and Real Madrid Clasico set for October 26 at the Camp Nou stadium. Both clubs had reportedly refused an offer to hold the match in Madrid.

"The international community must help us to solve the conflict between Catalonia and Spain," he said. "Some mediator from outside (must) help us sit (down) and talk."

The Supreme Court's explosive decision has thrust the Catalan dispute to the heart of the political debate as Spain heads towards a fourth election in as many years, which will be held on November 10.